Love is the key 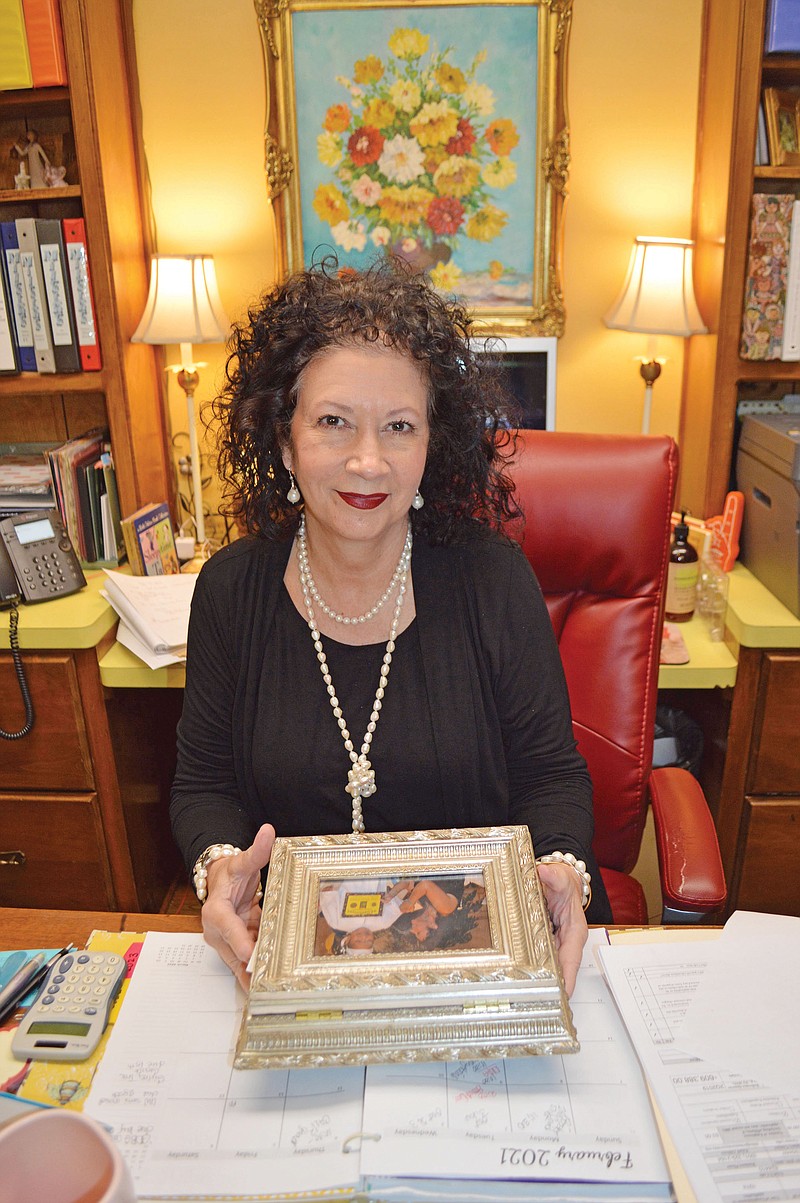 Teresa Little holds a photo-frame box filled with special notes from parents as she sits at her desk in Milestones Services Inc., formerly the Faulkner County Day School, in Conway. Little started with the early-education program almost 38 years ago, and she became executive director 4 1/2 years ago. The program is celebrating its 60th anniversary.

The photo-frame box is overflowing — the result of her almost 38-year career with the nonprofit early-intervention childhood program that is celebrating its 60th anniversary this month.

“When I get really down … I pull these out and read them,” Little said.

Little doesn’t get down often, although right now, she said, her arms are aching to hold one of the babies in the day program that combines typically developing children with special-needs children.

“I miss them so bad because I’m not going in the rooms at all during COVID-19 — ah, man, just to go hold one for a minute,” she said.

Little laughed and said her grandmother always called her “an ol’ baby tender.” Little, who has three grown children and five grandchildren, said that any time she sees a baby in public, she can’t resist playing peekaboo or making silly faces to entertain the child.

Little grew up in Mountain Pine, but when she was in the fifth grade, her family moved to her grandparents’ farm in Perryville. Little said her career choice can be traced to her family. Her mother worked in the Perry County Nursing Home. Her brother, Tracy Bull, is an early-childhood director of a similar program that serves Perry County. Her brother’s weight dropped to 2 pounds after he was born, and she had a cousin with health problems, both of whom she said probably impacted her career direction.

“It’s like we’re helpers,” she said of her family. “I’m also sassy and have a lot of grit, too. It’s not like I’m this big puffy marshmallow up here, although I do cry a lot, especially when I talk about the children and families served by Milestones.”

Little was a straight-A student at Perryville High School, but she still did projects for extra points. In home economics, she and a couple of friends volunteered at a now-defunct school for developmentally delayed children. Little said she felt comfortable around the special-needs children, but she was particularly drawn to the speech therapist in the classroom.

Little decided to become a speech pathologist and graduated from the University of Central Arkansas in Conway with a double degree in speech pathology and special education and did her teaching practicum at what was then the Faulkner County Day School.

The school, renamed in 2017 to Milestones Services Inc., started with determined mothers of five special-needs school-age children who were taught in the basement at First United Methodist Church. In 1961, the Junior Auxiliary of Conway sponsored the project, and Nonye Haynes, a retired schoolteacher, was paid $2,400 a year to teach the children, Little said.

At that time, schools weren’t required to teach children who needed certain categories of special education. These parents didn’t want their children to live at the Conway Human Development Center, but they wanted them to get an education during the day — hence the name day school. The Junior Auxiliary raised money to match state funds and built a facility for the day school in 1964 on Elizabeth Street near the University of Central Arkansas.

It soon became the UCA Learning Lab, where students who planned to become teachers could get experience. The Faulkner County Day School became a nonprofit organization in 1971 and formed a board of directors. An adult program that was added later ended in 2017.

The program has been at its current location, in a former church at 1700 South Blvd., for 25 years.

Technically defined as an early-intervention day-treatment program, the school provides speech, physical and occupational therapies. Milestones is also a Better Beginnings three-star facility, the highest rating the state gives, and serves children from birth to age 5. In a classroom of 12, usually eight are developmentally delayed and four are not, Little said. In the infant room, it’s usually 50-50.

Little was a speech pathologist for the state before getting hired in 1983 as the early-childhood director at the Faulkner County Day School by then-Executive Director Ruth Castleberry. The day school was still only for developmentally delayed children.

When she got hired, “I was on a mission,” Little said. Pregnant with her second child, Little said, she had experience with day cares and believed in her heart that the program would function better with special-needs children playing and learning alongside typically developing children.

And Castleberry would trust her to forge ahead. In 1987, a day care was added to the preschool, with children separated by ages and not abilities. It wasn’t a smooth transition.

“I thought, ‘Oh, everybody’s going to be happy,’” but some families balked, Little said.

“They thought it would take away from their child who had special needs. People were confused at first, but I was bound and determined it was going to work. I still hold on to it, and a lot of programs have let go [of combined classrooms]. The program is so much richer when you take children who are typically developing. Socially, they all learn to play, they learn skills from each other,” she said.

“Do they get bad habits from each other? Probably, but that’s normal. There’s no curriculum out there that can replace having children who are typically developing along with children who have delays. I’ve watched how well it works over the years,” Little said.

“We’re very fortunate to have UCA, Hendrix and [Central Baptist College]. We get a lot of professors’ children,” she said. “[The faculty] understand what we do; they see what we do. Most of the time, their children are extremely bright. Research shows — and I don’t need research to show me — that children typically developing become better leaders in the community. They become leaders in the classroom to help children who need skills. It doesn’t hold them back in what they learn.”

Lesley Graybeal, director of service learning and volunteerism at UCA, is vice president of the Milestones board. She and her husband moved to Conway in 2015 and heard good things about the preschool, she said.

Her son, Milo, 6, graduated from the preschool program last year, and her daughter, Violet, almost 3, is in the preschool now. Both are typically developing children.

“We could tell it was a unique program and that it was something special,” Graybeal said. “Definitely, my absolute favorite thing about Milestones is just how much the teachers and the staff just love the kids; you can just tell they’re there because they have a passion for the kids and taking care of kids with disabilities and who need a little bit more attention and care.

“I also was just really happy that some of Milo’s first friends were kids who had special needs. He has a couple of best buddies from preschool that he gets excited to go on a play date with. It makes it so easy as a parent to talk about that people are different, and that’s good, and that everybody is important.”

Keisha Garland, director of federal and supplemental programs for the Conway School District, served for seven years on the Milestones board, including as president, and has high praise for Little. She said Little leads by “walking in love.”

“What makes the center what it is — is her heart,” Garland said. “She does not do what she does as a job, even her prior position. She has a vested interest, a passion for leading the center and giving the kids the best experience they can get.”

Garland saw that firsthand. She adopted twins, Kelsey and Christian, in 2010. She said they were born with marijuana in their systems and had developmental delays. She was trying to decide between two programs that offered services for special-needs children, and she visited both.

Garland said she talked about her dilemma to Little.

“I said, ‘I’m a new momma. I don’t know how to decide where to put my babies,’” Garland said. “She held my hands — not even knowing me. She said, ‘You go with the mother’s intuition, whatever you feel.’ That was powerful. She could have just as easily sold her center. She told me [to go with] whatever feels right.

“I said, ‘This is where they’re coming, because this is home. You guys will love them.’”

Little said love is “very intangible, but I’ve found through the years that it is the most important ingredient [in the program].

“[Love] is hard to measure and hard to see, but it’s all in the tiny details,” she said.

Despite the preschool being in an older building, Little wants it to be bright and happy.

“The hallways are painted with murals,” she said. “For the most part, we try to keep some beauty. You know, it might not be fancy, but I find beauty in some things people don’t.”

The board of directors put love in a statement of core values formed last year, Little said.

The number of students is down because of COVID-19. After-hours care has been curtailed, and preschool graduation, a ceremony that Little relishes, didn’t take place last year.

“We’re struggling to get through COVID-19. It’s been hard. We’ve done well compared to some places, but it has been very difficult,” she said.

Little, who became executive director 4 1/2 years ago, and the board are making plans for after the pandemic.

“We would like to serve a few more children, and what we have looked at for the future is converting some of our therapy rooms into classrooms for another 16 children,” she said.

Little is thinking about retirement because she’d like to spend more time with her grandchildren when it’s safe to travel again. Her passion hasn’t waned through the years, though.

“My heart just goes out to people and to children,” Little said. “I did learn a long time ago that I can’t save the world. That was hard because I wanted to … but I could in my own little world. I can save maybe one child, maybe two children along the way, maybe a family.”

And when she gets down, she can take out her box of notes. The photo on the front of the box is of her handing a graduation certificate to a former preschool student, whose mother gave her the box as a gift. Little said her favorite keepsake is a poem titled “And More,” written in 2003 by the mother of another former student.

This is what I got and more.

One by one she helped me through

All the tears, while I stumbled, too.

This teacher’s dream is always done

With the child as number one.

Poor and troubled, blind and lame,

She seeks no fortune, wealth or name.

I’d want your child to know her, too.

She always wanted to win, or wait.

I give this honor a look above —

A teacher’s rainbow colored with love.

The teacher that gave her all and more!”