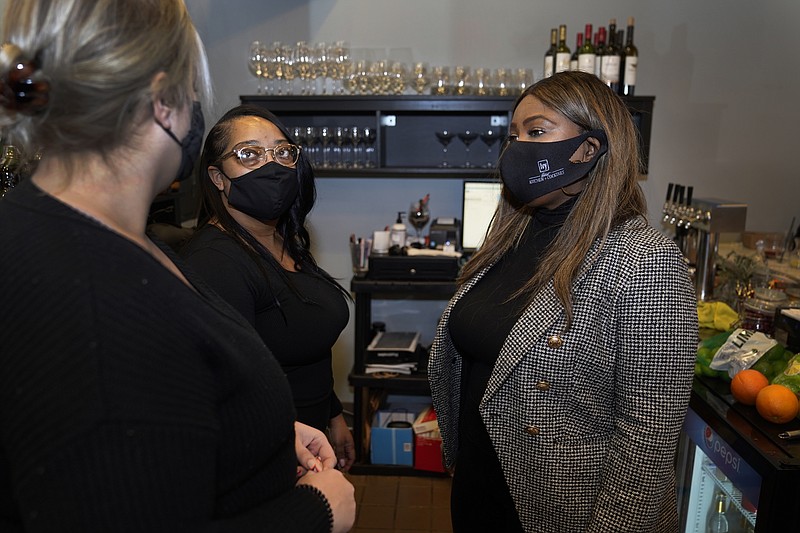 HOLD FOR STORY BY PAUL WISEMAN- Nya Marshall, right, owner of Ivy Kitchen & Cocktails, talks with employees in her restaurant, Saturday, Feb. 6, 2021 in Detroit. Marshall is worried about President Biden's plan to raise the minimum wage to $15 which could put her and other restaurants out of business in the middle of the pandemic. (AP Photo/Carlos Osorio)

WASHINGTON -- President Joe Biden's effort to raise the federal minimum wage to $15 an hour could provide a welcome opportunity for someone like Cristian Cardona, a 21-year-old fast food worker.

Cardona would love to earn enough to afford to move out of his parents' house in Orlando, Fla., and maybe scrape together money for college.

More than 1,000 miles away in Detroit, Nya Marshall worries that a $15 minimum wage would drive up her labor costs and perhaps force her to close her 2-year-old restaurant, already under strain from the viral pandemic.

Between Cardona's hope and Marshall's fear lies a roiling public debate, one with enormous consequences for American workers and businesses. Will the Biden administration succeed in enacting a much higher federal minimum wage -- and should it? Economists have argued the merits of minimum wage hikes for years.

"The mother of all economic debates" is how economists Michael Feroli and Daniel Silver of JPMorgan Chase describe it.

The administration has cast its campaign to raise the minimum wage as a way to lift up millions of the working poor, reduce America's vast financial inequality and help boost the economy.

"No American should work full time and live in poverty," said Rosemary Boeglin, a White House spokeswoman. "Research has shown that raising the minimum wage reduces poverty and has positive economic benefits for workers, their families, their communities, and local businesses where they spend those additional dollars."

Yet just this month, the nonpartisan Congressional Budget Office estimated that while raising the minimum wage to $15 by 2025 would increase pay for 17 million people and pull 900,000 out of poverty, it would also end 1.4 million jobs. The reasoning is that employers would cut jobs to make up for their higher labor costs.

The fate of Biden's minimum wage proposal remains hazy. Facing resistance in Congress, the president has acknowledged that he will likely have to omit the measure from the $1.9 trillion covid-19 financial relief package he is proposing and re-introduce it later as a separate bill.

For years, there was almost no debate at all about a minimum wage. Classical economists had standard advice on imposing or raising minimum wages: Don't. Piling higher labor costs on employers, the thinking went, would force them to cut jobs and end up hurting the very low-wage workers the minimum wage was intended to help.

But groundbreaking research in the 1990s suggested that the Econ 101 version was simplistic at best. Now there is growing confidence among economists -- though far from a consensus -- that lawmakers can mandate sharp increases in the minimum wage without killing large numbers of jobs.

Assessing Biden's $15 plan, for instance, economists at Morgan Stanley have concluded that "the impact to employment, positive or negative, would be minimal, while the social benefits to lifting real wages of lower-income earners and millions out of poverty are substantial."

The federal government introduced a minimum wage to a Depression-scarred country in 1938. Though Congress has raised the minimum over time, it hasn't done so for more than 11 years -- the longest gap between increases. Adjusted for inflation, $7.25 in 2009 dollars would be about $8.80 now. Twenty-nine states and Washington, D.C., have already adopted minimum wages above the federal $7.25.

The United States lags behind other developed countries in the size of its minimum wage. In 2018, the U.S. minimum amounted to 33% of the nation's median earnings -- dead-last among 31 countries in the Organization for Economic Cooperation and Development. By contrast, Canada's minimum wage came to 51% of median income, France's 62%

Biden's plan would shake things up entirely. He proposes gradually raising the wage to $15 an hour by 2025, starting with a jump to $9.50 this year. Thereafter, it would be indexed to grow at the same rate as the U.S. median wage -- the point at which half earn more and half earn less.

Advocates say that raising wages at the bottom of the pay scale would help relieve income inequality, including racial disparities in earnings. The liberal Economic Policy Institute estimates that 31% of Blacks and 26% of Latinos would receive a raise if the federal minimum wage were elevated to $15 an hour.

Two economists at the University of California Berkeley, Ellora Derenoncourt and Claire Montialoux, reported last year that the expansion of the minimum wage in the 1960s and 1970s "played a critical role" in temporarily narrowing the income gap between white and Black workers. They concluded that "minimum wage policy can play a critical role in reducing racial economic disparities."

Expert thinking on the minimum wage began to change with the publication in 1993 of a paper by economists David Card and Alan Krueger, then both at Princeton University. Before then, economists had worried that their theoretical models did not account for the complexity of the job market.

So when New Jersey raised its minimum wage in 1992 -- and neighboring Pennsylvania did not -- Card and Krueger saw a real-world experiment in the making. Would New Jersey lose low wage jobs, as classical economics had taught?

The two economists surveyed 410 fast-food restaurants in both states. Their surprising discovery: The restaurants in New Jersey, despite the burden of a higher minimum wage, actually added more jobs than those in Pennsylvania did.

"What they found was very shocking: Wages rose quite a bit, but there was no evidence of reduced employment," said Arindrajit Dube of the University of Massachusetts Amherst, a leading minimum wage researcher. "This sent shockwaves through the discipline."

Dube, who himself worked a minimum wage job at McDonald's as a teenager in Seattle, cites two reasons why he thinks higher minimum wages don't generally kill jobs. First, many companies can raise prices to pass along their higher labor costs.

"A burger may cost 50 cents more," Dube said. "What that means is that middle- and higher-income consumers are, in fact, subsidizing low-wage workers. That's a feature, not a bug."

Second, he said, the higher a wage, the less likely it is that employees will quit. So a higher federal minimum could reduce high turnover at, say, fast-food outlets and make them more productive. Employers wouldn't have to constantly scramble to find and train new employees -- a task that consumes time, money and resources.

Speaking with analysts last month, in fact, McDonald's CEO Chris Kempczinski said the fast-food giant would "do just fine" as long as the wage increase applied to everybody.

Yet by more than doubling the federal minimum wage over a few years, Biden's plan would enter uncharted territory. Feroli and Silver of JPMorgan note that most minimum wage increases amount to 5% to 15%. A doubling of the minimum, as Biden proposes, could potentially exert a more harmful effect on jobs than research has suggested.

Dube concedes that Biden runs the risk of raising the minimum wage too high, too fast. Yet he argues that the gradual phase-in would allow policymakers to monitor how the job market is reacting -- and to delay further scheduled wage increases if employers responded to their higher costs by cutting jobs.

At a town hall last week in Milwaukee, Biden seemed to signal a willingness to settle for a more modest increase in the federal minimum wage.

"I do support a $15 minimum wage," the president said, while adding, "but that's a debatable issue."

He suggested that an increase to $12 or $13 an hour by 2025, rather than to $15, would mean "the impact on business would be absolutely diminished." And he agreed that "it's not illegitimate" for small businesses to fear a sharply higher wage.

Indeed, critics argue that now isn't the time for a hefty wage increase. Many of the businesses most likely to pay the minimum -- restaurants, hotels, movie theaters -- have been hardest hit by the pandemic and the lockdowns and other steps meant to contain it.

Consider Marshall's Detroit restaurant, Ivy Kitchen + Cocktails, already devastated by the coronavirus. Revenue is down 85%. She fears that higher labor costs could deliver the final blow.

"We're not making money; 2020 was a complete loss," Marshall said. "To impose such a wage increase on us right now would not be a good idea, and a lot of us would just shut down .. Our doors are barely open."

Then again, the pandemic has also exposed how difficult life is at the bottom of the income ladder. In Orlando, Cardona makes $11 an hour as a manager at a McDonald's. Unable to afford a place of his own, he lives with his parents, chipping in for groceries and help on the electric bill. His plans to save for college are on hold -- indefinitely.

A bump up to $15 an hour "would definitely be a very nice boost; $11 is still not a living wage," Cardona said. "A lot of people who make this wage, they live paycheck to paycheck."

Many of his co-workers, he notes, aren't teenagers making a few bucks after school. They're single mothers or elderly adults, struggling to pay rent, afford utility bills, buy groceries.

As for Biden's minimum wage proposal, it is up against the Senate's "budget reconciliation" rules, which will likely govern the president's rescue aid package. The reconciliation rules allow legislation to pass with a simple majority vote, not a filibuster-proof majority of 60 senators. But they are supposed to be limited to budgetary matters and likely don't apply to a minimum wage increase.

Should the federal government remain at an impasse, states and localities, which can go beyond the federal minimum, won't necessarily wait around. Twenty-one states increased their minimum wages last year, Morgan Stanley notes.

Cities are getting into the act, too. In a study out this month, Dube and Attila Lindner of University College London found that 42 cities have set minimum wages above the federal mandate. And 22 of them, including Seattle, Los Angeles and Washington, D.C., are already at $15 or more -- up from just three in 2010.

-- Information for this article was contributed by Dee-Ann Durbin and Christopher Rugaber of the Associated Press. 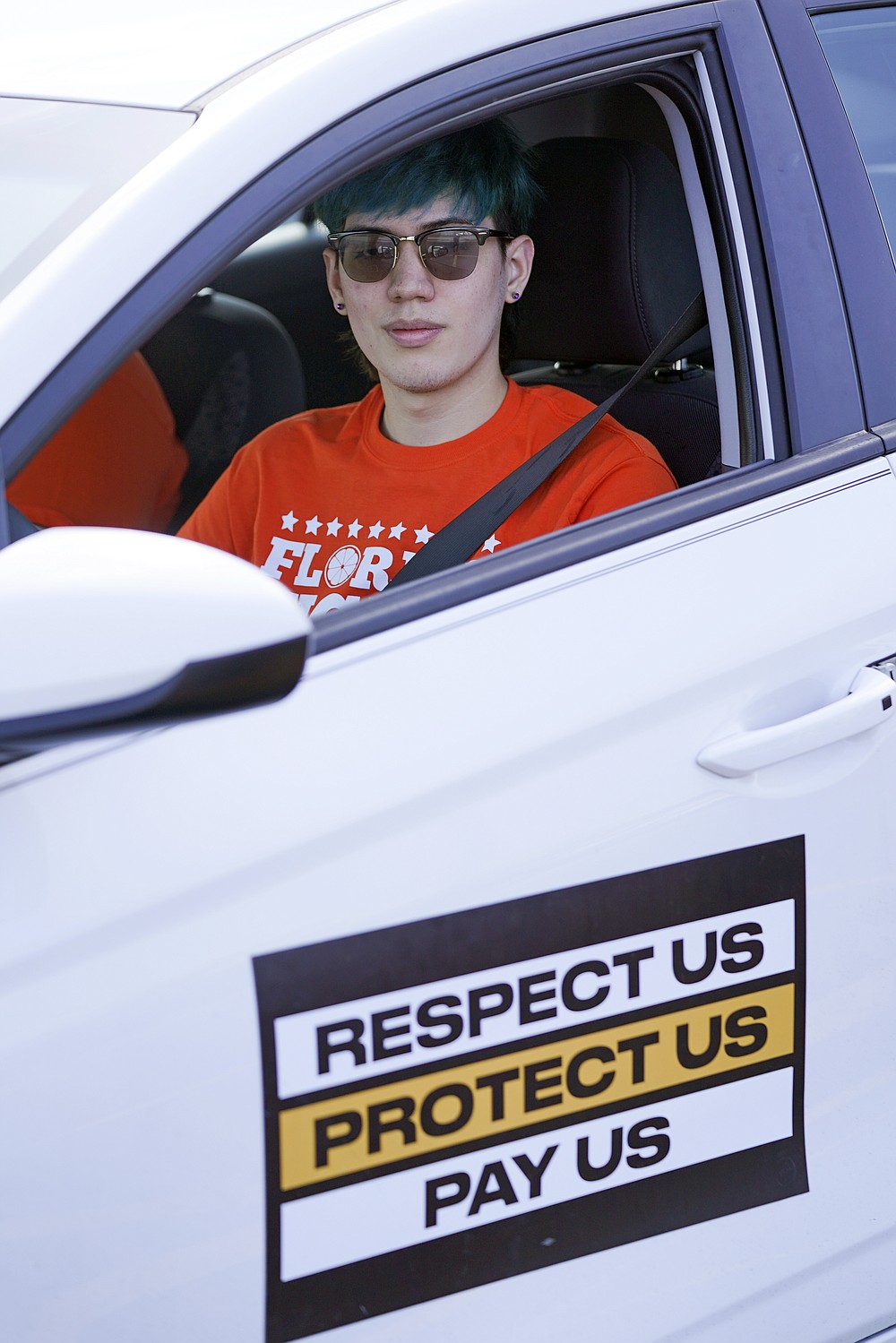 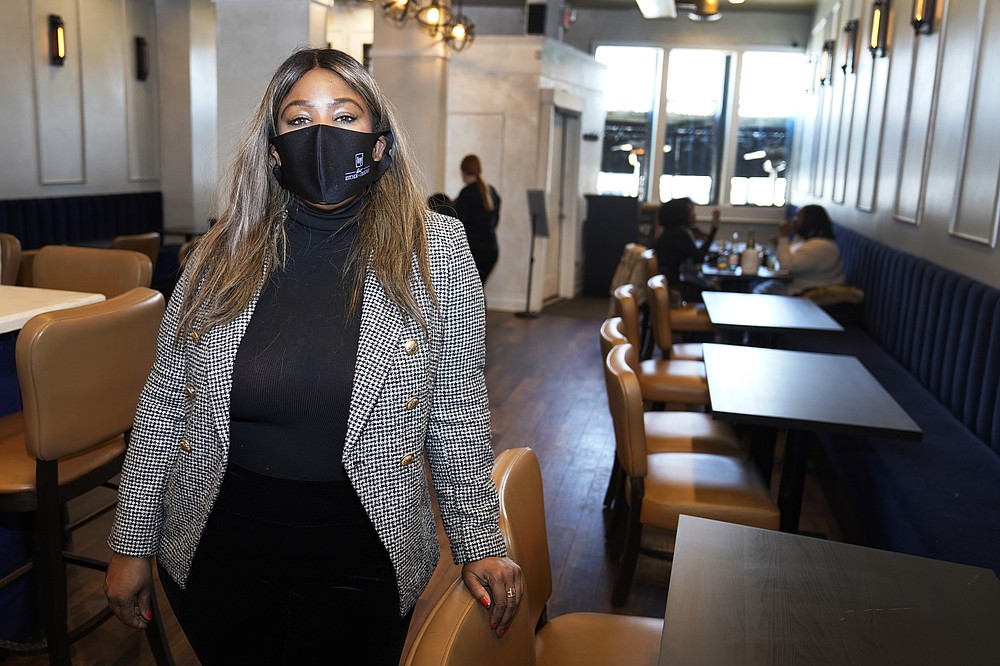 Nya Marshall, owner of Ivy Kitchen & Cocktails is seen in her restaurant, Saturday, Feb. 6, 2021 in Detroit. Marshall is worried about President Biden's plan to raise the minimum wage to $15 which could put her and other restaurants out of business in the middle of the pandemic. (AP Photo/Carlos Osorio) 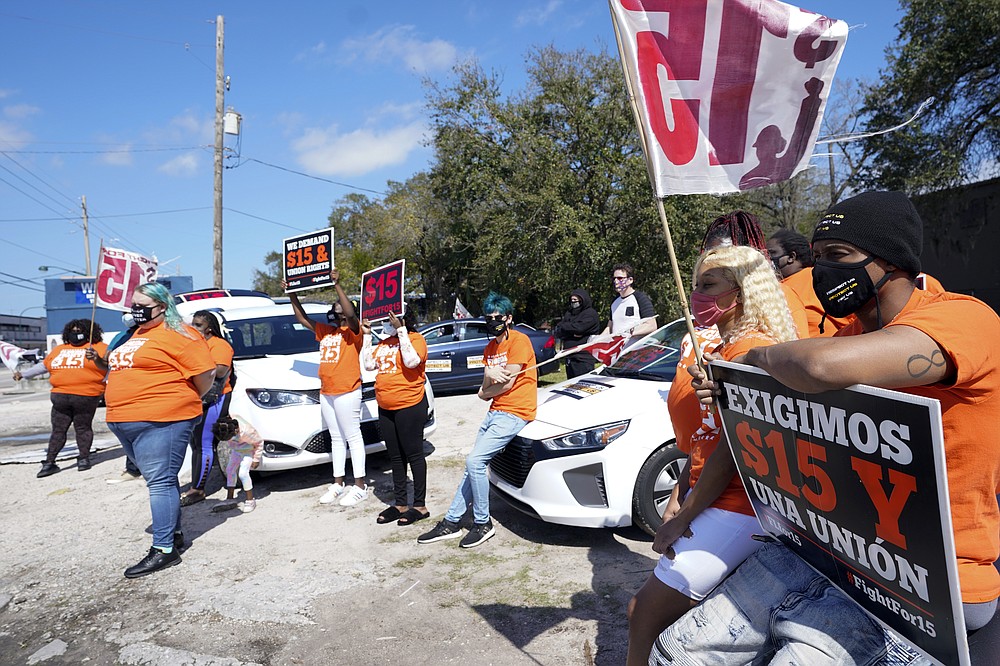 Cristian Cardona, sitting on a car hood, center, an employee at a McDonald's, attends a rally for a $15 an hour minimum wage Tuesday, Feb. 16, 2021, in Orlando, Fla. (AP Photo/John Raoux) 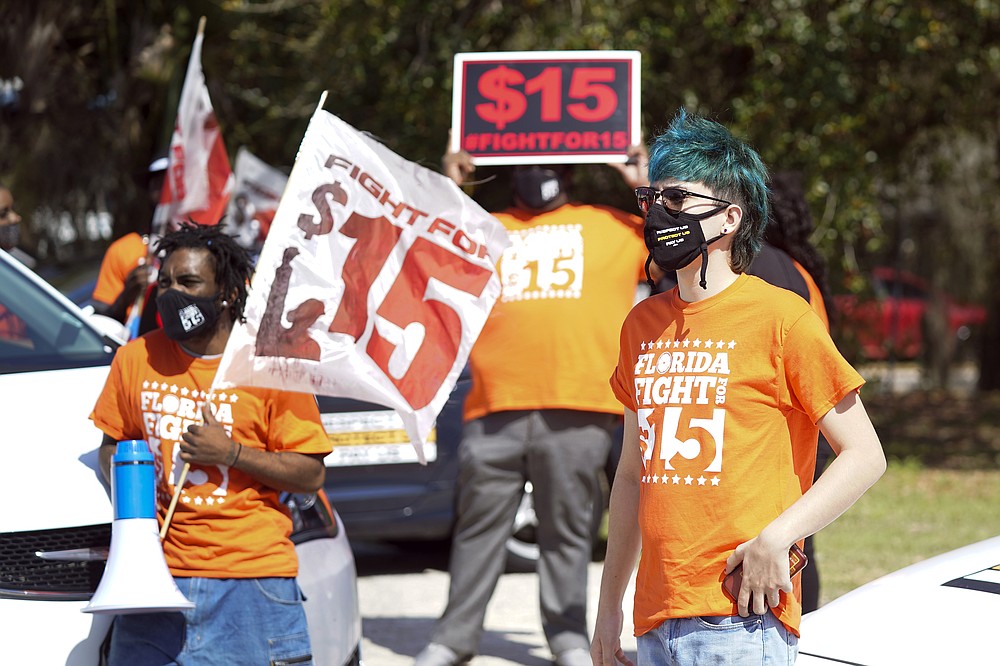 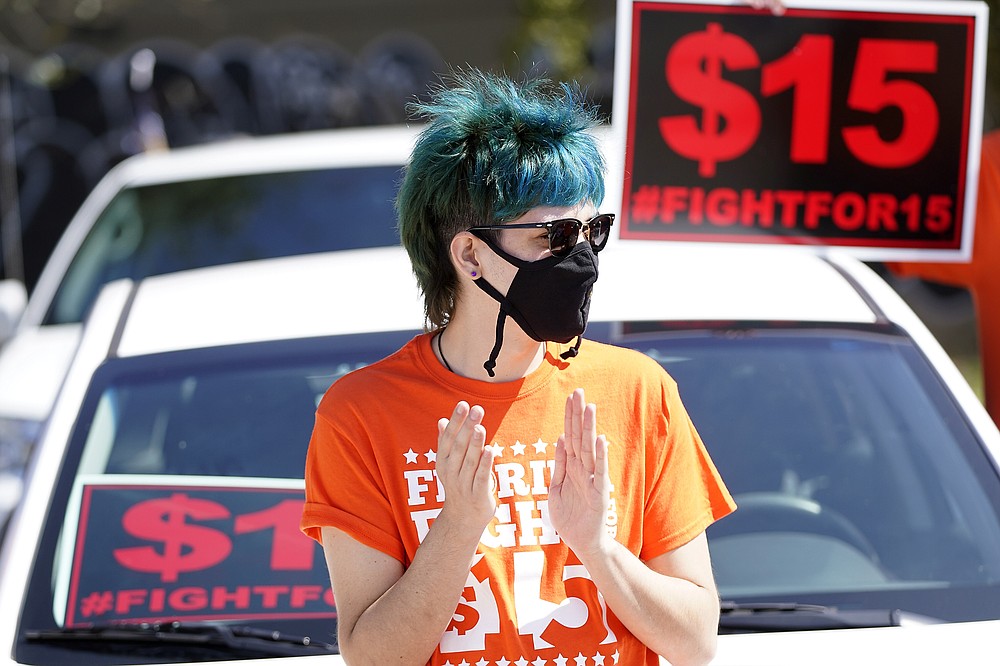 Cristian Cardona, an employee at a McDonald's, attends a rally for a $15 an hour minimum wage Tuesday, Feb. 16, 2021, in Orlando, Fla. (AP Photo/John Raoux)
ADVERTISEMENT