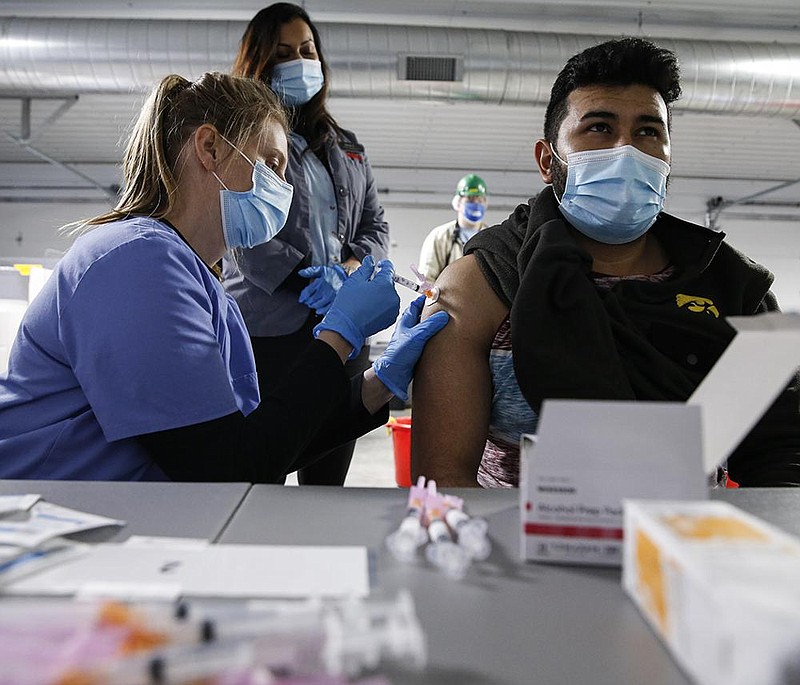 Almost a month after U.S. vaccination campaigns ramped up to give covid-19 shots to more than 1 million people a day, their second doses are coming due, straining state rollouts and leaving some without complete immunizations.

In Texas alone, almost 6,000 people were overdue for their second shots in early February. Washington state officials said last week that some mass vaccination clinics would deliver only follow-up doses. And a Michigan hospital system canceled last-dose appointments for the past week after its supply was reduced.

"All I have on hand is enough to get me through today and tomorrow," Carolyn Wilson, chief operating officer of Beaumont Health system in Michigan, said in an interview last week.

U.S. health officials warned last year that two-shot regimens would raise the degree of difficulty for covid-19 immunizations, and originally held back second doses to make sure they would be available as recommended three to four weeks after the first. As President Joe Biden accelerates purchases and distribution in an effort to get protection for almost all Americans by the end of the summer, critical weaknesses in the system are starting to show.

"For the first six weeks of this program or so, we were only giving first shots, and now we have to kind of pay the piper," said Eric Toner, a senior scholar at the Johns Hopkins Center for Health Security.

Timing of the doses is seen as a key factor in effective immunization. Moderna Inc. says shots should be given four weeks apart to ensure efficacy, while the partnership of Pfizer Inc. and BioNTech recommends a three-week pause. A working group of Centers for Disease Control and Prevention advisers is considering recommendations for extending that interval, Bloomberg News reported, although it still isn't clear what effect that might have on protection.

Only a small percentage of people vaccinated didn't get their second doses within six weeks of the first, and most got it within the recommended three- or four-week interval, the CDC said in an email. The agency declined to provide more detailed numbers.

Meanwhile, more data is emerging that supports a delay between doses. AstraZeneca, whose vaccine hasn't been cleared in the U.S., says its shots work best when they are administered 12 weeks apart. Israeli researchers found the Pfizer-BioNTech vaccine gives 85% protection from symptoms after just one dose. Pfizer doesn't think one dose will work, chief executive Albert Bourla said Friday at a plant in Michigan where he appeared with Biden, though the company is looking at the matter.

About 41 million people nationwide have gotten at least one shot and roughly 40% of them -- 16 million -- have gotten two. About 1.6 million shots are administered every day, according to Bloomberg News' vaccination tracker. Each state has different criteria for who should be vaccinated first, but together 202 million Americans fit into priority groups -- people older than 65, essential workers and adults with high-risk medical conditions.

State-by-state data indicates a range of success with getting people fully immunized. Well over half of those vaccinated in West Virginia have completed the series, but a third or less have in California and Illinois, according to CDC data. Those rates could be influenced by how quickly states administered doses and reporting lags.

People who need second doses are competing for scarce supply with millions more trying to get their first. States have widened eligibility and opened immunization clinics at sports arenas and retail pharmacies. While a major increase in shots is expected soon, total weekly supply still has risen only modestly.

Houston's problems began even before Texas was hit by a crippling storm: The health department just began administering second doses in early February, Director Stephen Williams said in a recent interview. The city doesn't yet have the technology to book follow-up appointments when people receive their first shots, but Williams said he hopes an upgrade in the weeks ahead will change that.

Williams said the city is sending text and email messages with links to register, but he realizes not everyone will use them. "Our call center has been slammed," he said, with a list of 70,000 people needing to be called to book appointments.

Beaumont, an eight-hospital health system, followed Michigan health officials' instructions to administer most of its supply without holding reserves, said Wilson, but replenishment hasn't arrived in time to give second doses. Beaumont and Michigan's health department both say they're working to square the difference between the state's allocation and what the hospital expected.

When vaccines first became available in December, federal officials held back a reserve of second doses. In January, both the Trump and Biden administrations urged accelerating the campaign by shipping most of the supply as soon as it became available. But states take different approaches to using second doses: Some automatically allocate second doses, while others ask providers to order them.

"Every jurisdiction is approaching this differently," said Jessica Daley, vice president of strategic supplier engagement at Premier Inc., which provides purchasing and other services to more than 4,000 hospitals.

Pennsylvania health officials said last week that some providers inadvertently gave some shots intended as boosters for first doses. Hospitals followed officials' orders to use available supplies, relying on the state's pledge that second doses would be available when needed, Pennsylvania's hospital association said. The mix-up may lead to delays in follow-up shots, though not beyond the six weeks recommended by the CDC.

For people trying to get their second doses, the quest can be thwarted by the same technology hiccups and logistical snags that made the initial rollout bumpy.

Wayne Sadin got his first dose of the Moderna vaccine on Jan. 7, his 68th birthday, at Houston's Bayou City Event Center. Health workers said they would be in touch about a follow-up appointment.

"That was a little bit nerve-wracking," Sadin said.

Four weeks later, the technology consultant hadn't heard back and couldn't reach the health department. His doctor's office said he had to return to the center for his second shot. Finally, he tweeted to the health department that he was on hold with its call center. He got a slot on a Saturday afternoon, 30 days after his initial dose.

"I don't know why they're not communicating better," he said.

Meanwhile, the CDC has yet to change its virus guidelines: At least for now, people should follow the same rules as everybody else about wearing a mask, keeping a 6-foot distance and avoiding crowds -- even after they've gotten their second vaccine dose.

Experts including Dr. Anthony Fauci, the top U.S. infectious-disease expert, have warned inoculated people not to let their guard down.

"You're asking a very logical question," Fauci responded when a 91-year-old California woman recently asked if she and her vaccinated friends could resume their mahjong games.

In that webcast exchange, Fauci pointed to the CDC's recommendations, which so far are mum about exceptions for vaccinated people getting together. "Hang on," he told the woman, saying he expected updates to the guidelines as more people get the coveted shots.

Studies are underway to find out whether a person infected despite vaccination can still infect someone else. Fauci cited recent research from Spain showing the more coronavirus an infected person harbors -- what's called the viral load -- the more infectious they are.

Some preliminary findings from Israel have suggested people infected after the first vaccine dose, when they're only partially protected, had smaller viral loads than unvaccinated people who got infected. That's encouraging if the findings hold up. Israel has vaccinated a large fraction of its population and scientists worldwide are watching how the outbreak responds as those inoculations increase.

Also critical is tracking whether the vaccines protect against new, mutated versions of the virus that are spreading rapidly in some countries, said Dr. Walter Orenstein, an infectious-disease expert at Emory University. He's been vaccinated and is scrupulously following the CDC guidelines.

There are practical reasons. "It's hard to tell who got vaccinated and who didn't if you're just walking around the grocery store," noted University of Pennsylvania immunologist E. John Wherry.

Information for this article was contributed by John Tozzi of Bloomberg News (TNS); and by Lauran Neergaard and Kelli Kennedy of The Associated Press.