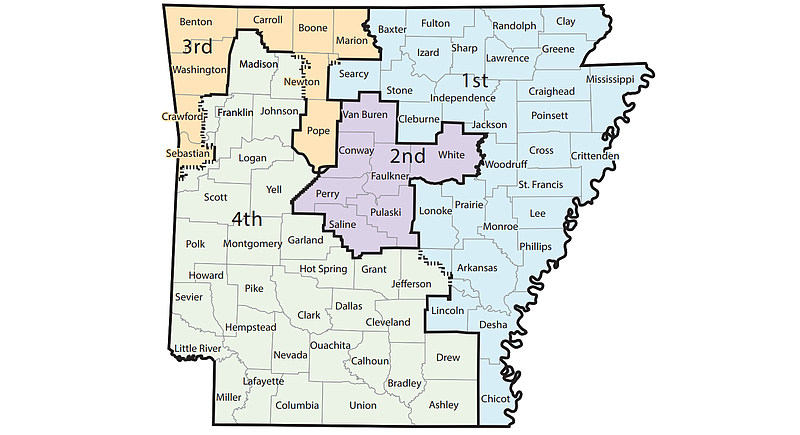 The boundaries of Arkansas' four congressional districts set after the 2010 U.S. Census.

The delay of U.S. census numbers this year is crimping the redrawing of Arkansas legislative district boundaries, which is causing ripple effects for every level of government in the state and even next year's party primaries.

District lines are redrawn after each U.S. census -- required every 10 years under the Constitution.

In the past, the state held hearings, received months of public input and finished its district mapping by October, months before candidate filings began.

But this year the census numbers needed to draw those maps won't even arrive until about Sept. 30, the U.S. Census Bureau announced Feb. 1, compressing the process from a roughly yearlong one to a five-month rush.

The state district maps in question affect everything from city council wards to congressional districts.

Prospective candidates for a legislative or quorum court seat won't know what district they seek to represent until shortly before they have to file for election.

Candidate filings for next year's party primaries begin Feb. 22 next year. In previous years, the fall redistricting gave county election commissions and other local government bodies time to draw precinct boundaries and complete preparations for the next year's election.

The attorney general, governor and secretary of state make up the Arkansas Board of Apportionment, which oversees the redrawing of legislative district boundaries.

Boundaries for the four congressional districts are drawn by the Legislature, usually during a regular session. The census delay will push that process into a special session, said Sen. Jim Hendren, I-Sulphur Springs.

The census data's original release date was March 31, but the Census Bureau found errors in last year's results that it needs time to fix.

The pandemic caused problems that skewed results, including in college and university towns with campuses closing and students going home, and in hiring canvassers to go house to house, the Census Bureau said.

Other factors that may have skewed results included months of litigation tied to attempts by the administration of former President Donald Trump to exclude noncitizens from being counted; a census budget with no increase from the previous one for the first time in U.S. history; and the resignation of the census director in January.

Spokesmen for members of the apportionment board said the panel will do what the law requires but that the heaviest burden will fall on local governments. County election commissions, clerks and city governments can't redraw their political boundaries until the state finishes its work.

Doyle Webb, redistricting coordinator of the attorney general's office, will tour the state to get input from civic groups and other gatherings on what people want in their legislative districts, he said in an interview. The apportionment board also will use the internet to get public participation, he said.

"There's not going to be as much time for public input, and we have to show people that we're not going to let anyone exploit that," Webb said. Public participation is vital, he said.

Voter precinct lines based on the legislative districts are drawn by county election commissions. Precise legal descriptions must be drafted. Voter registration rolls must be adjusted by county clerks to reflect who will vote in the redrawn districts.

"It's really the counties that are going to feel the crush," said Kevin Niehaus, spokesman for the secretary of state's office, which oversees elections. "They have to do more than draw lines, and they have to wait on everybody else."

"We are at the end of the line," Harrell said, unable to proceed until the Census Bureau is done with its work and state district lines are redrawn.

The census delay, Niehaus said, "really throws a monkey wrench into everything."

In previous redistrictings, residents had months to weigh in on where district lines should go. What they had to say in public hearings and in letters and calls to elected officials often proved decisive, recent history shows.

Former Gov. Mike Beebe served during the previous redistricting. He said people sometimes strongly assert their views on districts. The big problem this year, he said, is how little time they will have to make their case based on real-world census numbers. Communities will know what they want but won't know until after Sept. 30 whether real numbers support their wishes.

The 2022 primaries are set for May 24 under current law. Party primaries have taken place as late as August in the state's history, Beebe said, adding that, "I'd have asked the Legislature to back up the primaries" if this year's delay had happened in the 2010 reapportionment.

Board of apportionment staff members draw up the boundaries with the cooperation of election officials, legislators and public officials from around the state. They are required to keep the population of each district as close to equal as they can.

Such precision requires specific house-by-house numbers that are available only in U.S. census block data. A census block is a subset of census figures showing how many people live in a geographic area. The blocks can be as small as a city block or can stretch for miles in sparsely populated areas.

Redistricting is so detailed that the apportionment board after the 1990 census drew at least one district line down the middle of a city street.

The work is guaranteed to displease some people.

That was after the 1980 census, and the less-senior senator lost his reelection bid against his veteran opponent in the next election.

"To this day, he will not talk to me or shake my hand," Clark said of the defeated senator.

Clark and Beebe said there are controversies and hard feelings even when the census runs smoothly and the data gathered is unchallenged. The delays and difficulties plaguing the 2020 census will surely worsen such disputes, they said.

After the 2010 census, public input and demands by city officials stopped an effort to divide Springdale into several Senate districts, news accounts show. City residents, leaders and legislators rallied around efforts to have one Senate district that covered most of the city.

After the 2000 census, Northwest Arkansas leaders hired legal counsel and warned the board of apportionment that it would face a challenge if the growing region's representation was shorted.

The redistricting process statewide after the 1990 census took place under federal court oversight because of past racial discrimination.

Apportionment board members and staff members are discussing whether to ask for legislation to delay candidate filings and other redistricting deadlines in light of the late census numbers, Webb said. But some deadlines cannot be moved, such as the November 2022 general election.

"You have to be a resident of a legislative district for a year to run for it," Webb said. "Well, if you don't know what the districts are, you won't be able to move into another district to run there."

Legislative districts, under federal law, must be close to equal in population, Webb said, but the board has to take care.

Redistricting wasn't going to be easy this year even without the delay, Niehaus said.

"We knew Northwest Arkansas was going to gain a state Senate district," he said. "Now we're wondering if it's not going to be two." And rough estimates show south and east Arkansas losing legislators, he said.