Tiny wedding of your dreams a reality in 2021 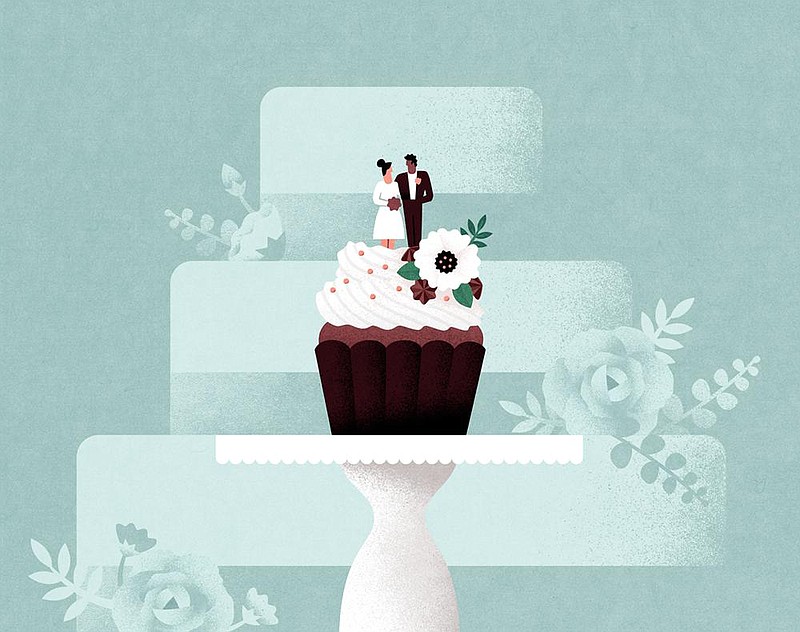 There’s a case to be made that the types of weddings we’re seeing now are often better than the full-blown galas of yore. (The New York Times/Melissa McFeeters)

By now it's clear that the fairy-tale, white-horse-and-carriage, glass slipper extravaganza is not happening anytime soon. And it shouldn't. Covidly speaking, it's not safe to waltz down the aisle clutching a bouquet the size of a Ferris wheel, in a dress that matches the window treatments, before hundreds of your besties.

But there's a case to be made that the types of weddings we're seeing now are often better than the full-blown galas of yore. Even wedding planners, who make their living by creating matrimonial magic, agree.

Elisabeth Kramer, a wedding planner in Portland, Ore., thinks the coronavirus pandemic has actually been instructive for couples. It has forced them to get their priorities straight. "I've always advocated that the wedding is not the important part," she said. "What matters is the marriage that the wedding gives birth to."

Couples are having to ask themselves the most significant question of all: "Why are we having a wedding?" she said. "Why are we getting married? By and large, couples are finding that their why is all about their love for each other. That's a beautiful thing, and we need more of it during this challenging time."

Here are some other reasons now might be the time to have the tiny wedding you've always wanted.

It's understandable that you would want to invite long lost pals, especially if you paid hundreds of dollars to attend their destination wedding in Ohio. But guess what? You can't! Nor must you invite Aunt Bertha, whom you've only met once but, well, she's your father's sister's cousin-in-law and it would make him happy.

"I have often said to our couples, be very intentional about your guest list -- don't get caught up inviting your co-workers or people you haven't spoken to in years because you were invited to their wedding," said Marcy Blum, a wedding and event planner in New York and Palm Beach, Fla. "The necessities of limiting one's guest list due to covid safety rules mitigate the problem and keep friends and distant family from feeling insulted about not being invited."

Dr. Laurie Hyacinthe, 40, a pediatric dentist and director of the pediatric dental residency program at Mount Sinai Hospital, had a shortened guest list in mind when planning her wedding. Both she and her husband, Nael Dabaghi, a 38-year-old entrepreneur in the cosmetics industry, come from large families.

Inviting everyone, would have been "impossible in normal circumstances," said Hyacinthe, who is also an amateur kickboxer.

The couple married in their Harlem backyard Oct. 30, with four friends and their friends' two children in attendance. Their immediate families, who are scattered around Florida, Montreal, Toronto, Lebanon and Dubai, watched on Zoom. The couple had sent everyone cake, which they all cut in unison.

"Since no one can really travel easily, we didn't feel bad about letting family and friends know that we were keeping it small and they understood," she said. "There were no hard feelings, they were all just happy for us. That wouldn't have been the usual reaction."

Keyaira and Abrahim Adewunmi had been planning a traditional Nigerian wedding for 150 guests, which would have cost roughly $35,000.

"I had a vision," said Keyaira Adewunmi, 28, a brand strategist at Twitter who lives in Oakland, Calif. "I wanted people to stay for three days and have experiences."

As an alternative, they found an outdoor venue in Los Angeles for June 2021 and came close to putting down a deposit. But the place had a no-refund policy, and they worried that it wasn't worth the financial risk.

They decided that if they couldn't have the wedding they envisioned, they would focus on what marriage was truly about -- the union of two people. They looked at various safe, visually pleasing venues in stunning locations where they could honeymoon afterward. They fell in love with the Acre Resort in San Jose del Cabo, Mexico, and wed Nov. 9, their seventh anniversary together.

The hotel provided a list of recommended local vendors, including a florist, minister, photographer and makeup artist. After the ceremony, which was held on the lawn overlooking an earthy jungle oasis, the couple had a private five-course dinner and mezcal tastings. Grand total: $6,000 with airfare.

"Now that I've experienced it, it seems kind of silly to pay for an experience for everyone else," Keyaira Adewunmi said. "We catered to what we wanted."

NICER THAN YOU THOUGHT

Yes. Really. Just ask Eric John Bryant and Eugen Palma, who have been together for more than 15 years but never made it legal. "We both felt the institution of marriage was problematic," said Bryant, 56, the former editor-in-chief of Art and Auction magazine who is now an editorial consultant. Palma, 56, is an electrophysiologist at Montefiore Medical Center in New York.

But recently, for "practical reasons," they began considering it. With the outbreak of covid-19, "thoughts about wills and inheritance suddenly seemed relevant as never before," Bryant said.

They decided to get married at New York at the end of August. But they realized they'd have to find an officiant and witnesses, and it would end up being more complicated than they wanted.

Bryant mentioned his hesitation to an old friend, Joel Villaseca, who happened to be in New York visiting from his studies at a Buddhist retreat. Villaseca volunteered to officiate and got registered as a Universal Life Minister.

The wedding they had "long assumed would be some bureaucratic outing to City Hall turned into a surprisingly moving ceremony at the beach in Fire Island with guests in attendance on Zoom from Brooklyn to Virginia to Manila," Bryant said. "So, the benefit for me of marrying during that pandemic was that we made something more of the occasion than we would have under normal circumstances."

GOOD FOR THE PSYCHE

Alexandra Napp and Ben Weiner married Sept. 12 in East Hampton, N.Y., before a dozen family members. Their original idea was a 200-person winter fantasy on Dec. 12.

Canceling their dream wedding "did not come without tears and agony," Napp, 29, a nurse at a Manhattan hospital, said. But their chosen venue wouldn't bump up their date to September, so they could hold a smaller event outdoors. After much debate -- "along with 16 spreadsheets to help us decide and execute," Napp says -- they decided to call off the big bash.

The couple, their parents and siblings rented a house on the water and held a ceremony in the backyard. Despite losing their $10,000 deposit on their original venue, they spent about a quarter of the $100,000 the original affair would have cost.

"Not caring that my mom got lipstick on my cheek as she kissed me for the last time before the ceremony would definitely not have happened," she added.

Rhonnie Fischman learned the art of the pivot when helping her daughter, Risa Fischman, a speech pathologist in New York, plan her wedding last year.

"It was a really good lesson in 'this is your expectation [but] this is the reality," said Fischman of Woodmere, N.Y. "You can either fight it or say, 'Let's see how we can make it as best as we can.'"

Her daughter, who is 33, married Jack Pekelis, 31, who works in finance, on Oct. 18 at Temple Beth El in Cedarhurst, N.Y. The night before the wedding, all 30 guests took covid-19 tests, while the couple handed out water and jelly beans.

"The road to get to the wedding wasn't sad," Rhonnie Fischman said. "We were always aware of the fact that people were losing lives and jobs. We weren't sure if we could have a party. In the great scheme of things, we never lost sight of that."

ADJUST ON THE FLY

The sprinklers went off 30 minutes before Napp and Weiner's ceremony was supposed to begin in their yard. Rather than freak out, they waited 15 minutes for them to turn off. Then they realized that sunset would be an ideal backdrop for their first dance, instead of after dinner, as planned. So they had it at dusk.

"We didn't have to think about which guests were still at the bar or when the band was supposed to start playing," she said.

At 10 p.m., she changed into sweatpants and danced the night away in comfort. "My dad mentioned the word 'tampon' in his wedding speech, and while I would have wanted to crawl under the table with 200 guests to witness, I was able to laugh because it was just us," she said. "Without a schedule from the venue we were truly able to relax and enjoy what was happening around us."

Covid-19 has toppled the $55 billion wedding industry, which is made up of numerous small businesses, from caterers and florists, to photographers and musicians.

"Right now, the wedding industry needs business," said Brittney Reecy, a wedding planner in Chicago. "The industry is made up of small businesses and needs events to continue to stay afloat. They are simply happy to be working and at this time will go above and beyond to make celebrations happen for people."

When Hyacinthe shared news of her marriage on Facebook, she was moved at how joyfully people responded, beyond the scope of a normal wedding. But of course, this isn't a normal year. "We're all desperately in need of good news during the current times," she said.