Vaccine equity at issue in Arkansas 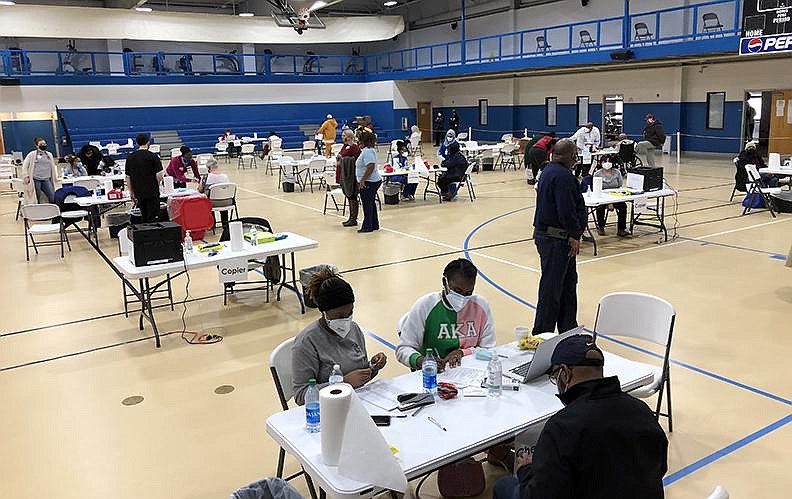 About 900 doses of covid-19 vaccines were administered on Feb. 13 at this clinic at the Larry S. Bryant Multipurpose Center in Forrest City as part of an effort by the state Department of Health and Forrest City community leaders to increase vaccine access in the Black community. (Arkansas Democrat-Gazette/Lara Farrar)

Like other children of many older Arkansans, Erika Gonzalez has been trying to help her 76-year-old mother, Carmen, get a covid-19 vaccination for weeks.

Unlike many Arkansans, Gonzalez, 35, is an immigrant from Mexico who doesn't speak much English, which is making the task of signing up her mom, who speaks only Spanish, even more daunting.

Gonzalez started trying to get her mom signed up in mid-January, when those 70 and older became eligible.

"I've helped my mom but have had no luck in getting a vaccine," she said. "Some pharmacies where you sign up, you have to follow a series of steps, which in some cases are difficult."

"I've asked myself whether there are other people in the same difficult situation here," said Gonzalez, who lives with her mother in Springdale, where 38% of the population is Hispanic.

There are other people, specifically those in communities of color in Arkansas, who are struggling to access covid-19 vaccines for reasons ranging from lack of information in languages other than English to a lack of health care providers, such as hospitals and community pharmacies, near where they live.

These groups, including Blacks, Hispanics and Marshallese, have been ravaged by the coronavirus, and public health experts say ensuring they have access to vaccines is crucial not only for herd immunity but also for social justice, so that the disease does not continue its unbridled spread among these vulnerable groups.

The Arkansas Department of Health doesn't yet have a complete picture of the vaccine inroads made among minorities because it has not collected enough data on race or ethnicity.

"This is the first time that most locations providing vaccinations at this scale have ever done this," said Dr. Jennifer Dillaha, the state's epidemiologist. "We are recognizing there are weaknesses in the processes and procedures that have been implemented and are working on improving them."

This is a trend across the country, according to the U.S. Centers for Disease Control and Prevention, which reported in early February that race and ethnicity data had been collected nationwide for only about half of the nearly 13 million people who had been inoculated during the first month of vaccinations, which began Dec. 14.

Of the roughly 6.7 million whose race or ethnicity was recorded, 60.4% were white, according to the CDC.

Similarly, the state Health Department collected almost no race or ethnicity data for the first month of vaccinations, Dillaha said, adding that the department now asks community pharmacies and others to try to collect such data from patients receiving their first or second doses.

This request was made nearly two months after the first vaccines were given, Dillaha said, adding that she doesn't think it is too late to "get a good picture of groups that need attention."

"We are going to work hard to make sure we have good data," she said. "It is important that we provide vaccine equitably."

As of Thursday, a Health Department spokesperson said the agency was still compiling data and that "many providers have not submitted that information, so we are working to fill in the gaps."

Preliminary data appears to indicate that those who have received doses in Arkansas are mostly white.

Data collected by the University of Arkansas for Medical Sciences, which has a vaccine clinic in Little Rock utilized mostly by residents of Pulaski County -- where about 38% of the county's 391,000 residents are Black -- shows that nearly 80% of the roughly 6,000 doses given as of Thursday were to people who are white.

About 16%, or 960 doses, went to Black individuals, according to UAMS.

Race and ethnicity "obviously is an important thing we should be tracking precisely because viruses don't distinguish between peoples," said Mark Williams, dean of the UAMS College of Public Health. "If we want to control the virus and achieve herd immunity through vaccination, then we need to include all portions of our communities."

Data collected by the Health Department indicating how many people per county have been vaccinated also provides some clues. In some counties where there are bigger minority populations, it appears vaccine rates are lower.

In Jefferson County, for example, where about 60% of the 16-and-older population of 55,752 is Black, 14% had received a first or second dose as of Thursday.

"We know which counties have high minority populations," Dillaha said. "So we are able to plan activities in those counties to make sure that the populations there have access to the vaccine."

"We already have a number of interventions and activities going on right now to encourage vaccination among minority populations," she said.

Community leaders and individual pharmacy owners are largely responsible for organizing the interventions, reaching out to the Health Department for assistance with the mass vaccination events intended to target communities of color.

One such event was held Jan. 29 in Pine Bluff in Jefferson County after local officials and the owner of a pharmacy there noticed that in a city where the majority of the population is Black, mostly whites were showing up for shots.

At one clinic at a Baptist church, "whites were outnumbering Blacks there," Pine Bluff Mayor Shirley Washington said.

At the Jan. 29 vaccination event, about 900 initial doses were given.

"The overwhelming majority were Black," Washington said. "There are these false perceptions out there that Black people don't want to be vaccinated, when I am not hearing or seeing that at all in my community."

"We noticed a discrepancy here in Pine Bluff," he said.

Stice helped lead the organization of the Pine Bluff clinic and more recently assisted with a similar event Feb. 13 in Forrest City, also targeting the Black community there, which makes up about 70% of residents.

Preliminary plans are underway for a clinic in Desha County to try to reach Hispanic communities, particularly as more migrants arrive in the spring to work on farms and might qualify for vaccines as eligibility expands to include essential workers, Stice said.

The event in Forrest City came about after the town's mayor, Cedric Williams, and other community members including pastors and judges grew increasingly concerned about low vaccination rates.

There are two pharmacies in St. Francis County, where Forrest City is located. Only one, Forrest City Family Pharmacy, had been allocated vaccine, about 100 doses per week.

"That pharmacy at one time had over 1,000 people on the waiting list," Williams said. "So myself and others started reaching out for help, and thankfully we were able to have the mass vaccination clinic."

"It is a godsend for our community," Williams said.

About 900 initial doses were given at the Forrest City event, held in a community center. Most who attended were Black.

Randle signed up on a waiting list at the local pharmacy in January but had not heard back and was losing hope, until she received a call from a church volunteer who signed them both up for the mass vaccine event.

"It was about six weeks ago when I signed up," Randle said. "I am not really sure how this even came about, but I am just glad it did."

Williams, the Forrest City mayor, and others who are organizing these events say a key to success is community involvement. Many shot recipients in Pine Bluff and Forrest City were contacted via churches that identified members who qualified.

Cognizant that many in their communities may not have internet access or follow social media, organizers targeted people via popular information channels, such as newspapers and morning radio shows.

"We started reaching out to people as soon as the vaccine became available," Williams said. "We knew from past experience with covid testing that eventually it [the vaccine] was going to make it to us."

Williams was referring to the lack of testing -- as well as information about the coronavirus -- that was available to minority communities when the pandemic hit last year.

The virus disproportionately affected many minority populations around the country and also in Arkansas.

However, the death rate among Blacks, who number about 473,000 in Arkansas, has been almost the same as that for the 2.4 million whites.

As of Saturday, the state recorded more than 5,300 coronavirus deaths.

Other communities -- like the Marshallese, who predominantly live in Northwest Arkansas -- have also been hit hard.

"There were points in July where the funeral homes the Marshallese use had nowhere to hold the bodies," said Mireya Reith, executive director of Arkansas United, a Springdale-based immigrant advocacy group.

It was not until several months into the crisis that a coordinated effort began in the state to make sure covid-19 tests as well as other resources, like information on economic aid or safety measures, reached populations like the Marshallese.

With covid-19 vaccination distribution among these groups, Reith said she fears a similar pattern is emerging.

"In some ways, it feels like we are starting from ground zero," Reith said. "There is not a plan. It is really just piecemeal, and therein lies the challenge."

"Our decision-makers, we don't think they are intentionally trying to further hurt our communities of color," she said. "They have just not had the bandwidth to take actions on the lessons learned from the original outbreak."

Arkansas United and similar organizations that work with minorities have begun to slowly collect names of Hispanics and other groups on a waiting list, which eventually will be used to coordinate with individual pharmacies once vaccination supplies increase, she said.

In the meantime, efforts are being made to educate communities about the vaccines by creating materials in other languages.

She added: "Policy changes have not been made. None of the systemic lessons we learned have been turned into policies or practices moving forward."

Michelle Smith, the state Health Department's Office of Health Equity director, takes it a step further, arguing that the disparities prevalent among minorities throughout the pandemic -- particularly those with low incomes -- are symptoms of a larger problem: ongoing systemic disparity.

"That has always been an issue in underserved communities," said Smith, who is working with local leaders for outreach, like the vaccine event in Forrest City. "Covid is highlighting the disparities in these communities."

"I am talking about poverty, lack of employment, lack of opportunity," said Smith, who is Black and whose aunt died from covid-19 this year. "These issues have been here for decades."

For now, officials say efforts to reach minorities are largely ad hoc and sporadic, initiated by community leaders who recognize the inequities and are trying to find ways to address them.

This means that for immigrants like Gonzalez, who is still trying to get her mother vaccinated, it could be a while longer.

"There have been difficult times where we have had to let go and grieve people that have been lost during the pandemic," she said. "We have learned to keep going no matter what happens." 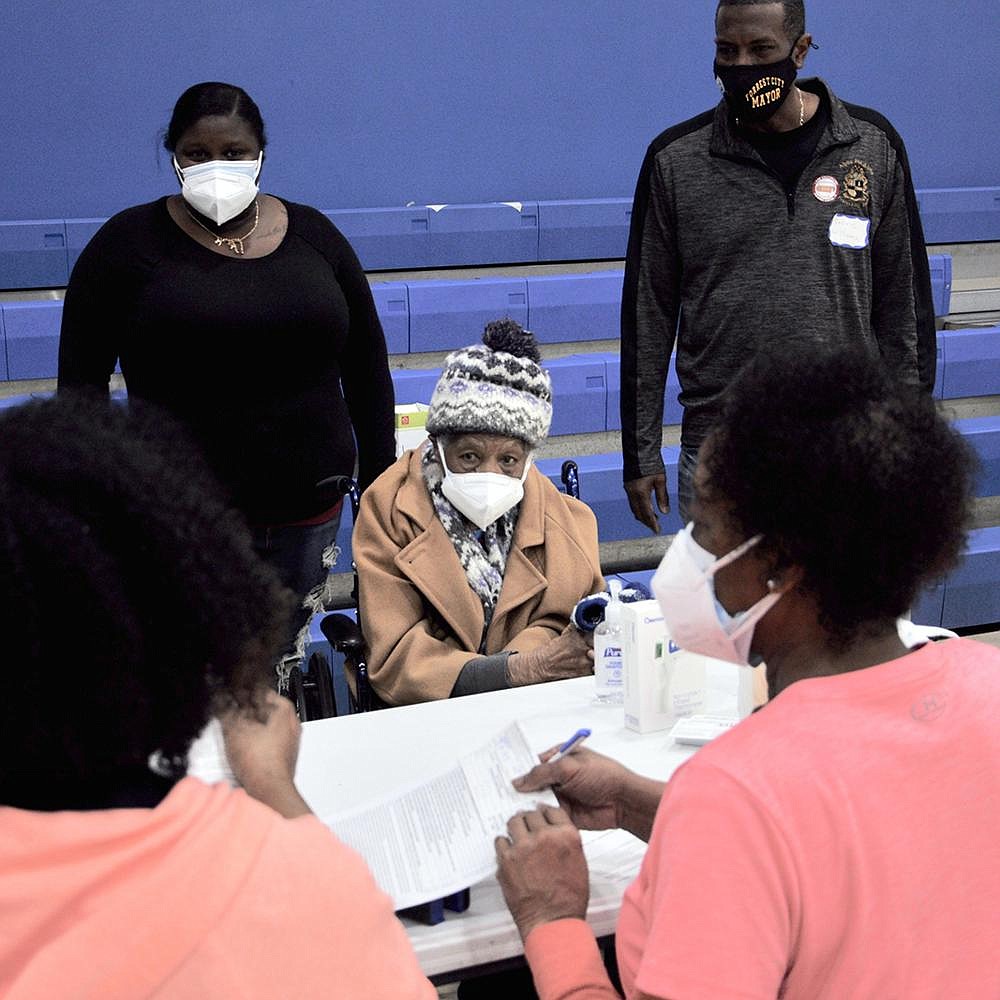 Clara Noble, 103, completes paperwork for her covid-19 vaccination at a clinic earlier this month in Forrest City. Her daughter said they had been on a pharmacy vaccination waiting list for six weeks. At right is Forrest City Mayor Cedric Williams, who called the clinic “a godsend for our community.” (Arkansas Democrat-Gazette/Lara Farrar) 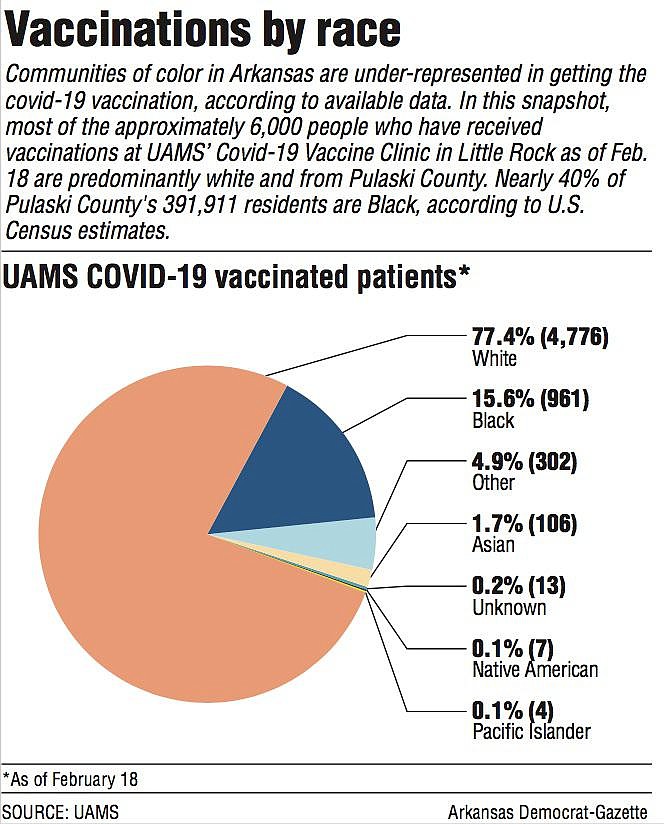