Why we can't stop thinking about Gorman's headband 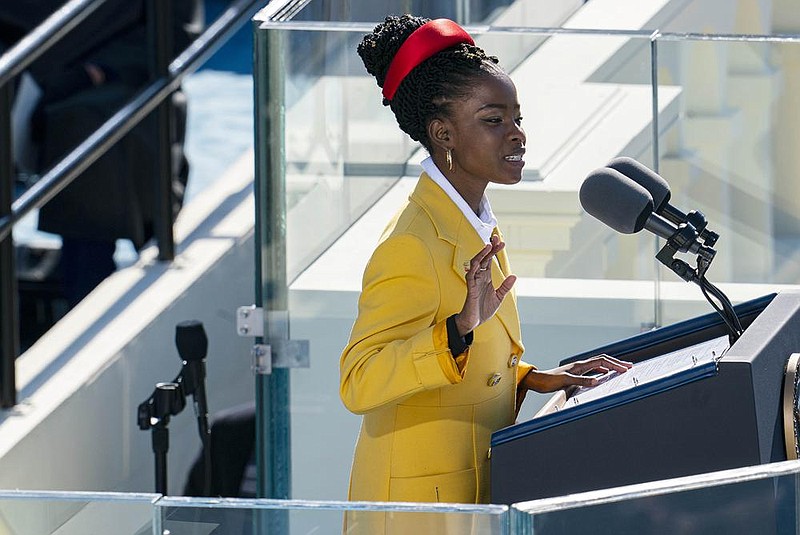 Amanda Gorman, the youth poet laureate, reads her poem, “The Hill We Climb,” during the inauguration of President Joe Biden at the Capitol in Washington on Jan. 20. The headband has morphed from a preppy status symbol to an empowering exclamation point, its purpose less controlling now than crowning. (The New York Times/Ruth Fremson)

Was the hair accessory that Amanda Gorman wore to the presidential inauguration a headband? Or was it a crown?

The wide padded satin piece by Prada, in a shade the brand calls Fiery Red, sat not astride Gorman's head but on top, encircling her braided updo. It heightened the presence of the petite 22-year-old poet behind the large podium with the presidential seal, drawing the viewer's eyes from her sunny yellow coat up to her face as she recited her work.

Accessories aficionados rejoiced. "It read so powerful and strong, like she had crowned herself," said Jennifer Behr, an accessories designer in New York.

"We saw that -- the whole world saw that -- the way Amanda Gorman held herself like a ... queen," said Ateh Jewel, a British beauty journalist and diversity advocate. Jewel began wearing headbands last spring when the pandemic started, both at home for herself but also in her television appearances, as a celebration and a call to action.

"The headband has made me turn the volume up on who I am, my ambitions, my aspirations," she said. She collaborated with Roseings London, a hair accessories brand in the U.K., on a limited-edition pink embellished style called the Kamala; she encourages people to post pictures with the hashtag #crownyourself.

The humble headband has morphed from a preppy status symbol to an empowering exclamation point, its purpose now less controlling than crowning. The designs trending today, puffed up with padding and glittering with gemstones, have the height and sparkle of fine jewelry reserved for royalty. Cast aside your childish "Alice in Wonderland" connotations; these headbands are about making a statement.

"It's such a powerful way for women to take back symbols that traditionally were used to diminish female power," said Nell Diamond, the chief executive and founder of Hill House Home, the lifestyle brand. Fans of the brand's Nap Dress styles often scoop up a padded headband in a matching print.

The one-size-fits-all, mood-lifting headband owes a bit of its popularity to the pandemic, too, standing out in a shoulders-up Zoom. "You're not going out, you're not buying party dresses, you're definitely not buying shoes and bags," said Lele Sadoughi, the founder and creative director of her namesake accessories brand. "The headband has been something super special."

Recently Sadoughi introduced a new collection with embellished headbands, priced between $150 and $195. The brand sold 500 within a half-hour.

Here's where this reporter should confess her own headband enthusiasm. I've graduated from the elastic ones I relied on to keep my hair out of my face for a run or, in the case of my first son, childbirth. Inspired by the royal connotation, I went all in on statement headbands last year in appearances for my book, "HRH: So Many Thoughts on Royal Style." I chose a bright purple satin one for my publisher's pre-pandemic media lunch and a black beaded version for an appointment at the bank to deposit my first advance check. For two virtual book parties I wore a light blue velvet headband, picking the color to match my book cover.

My collection has swelled to require its own drawer in my closet. I can confidently report that these oversize designs do make you stand a bit taller and stand out in the crowd.

This maxed-out headband moment is just the latest in the accessory's long history. From Grecian goddesses to bobbed flappers, there has been a headband for every fashion era. Just think of its visible roots in modern times: the simple band Grace Kelly wore or how chic Catherine Deneuve looked with her oversize black bow.

Diana, Princess of Wales, stripped an emerald choker across her forehead in 1985, and Whitney Houston sported a wide white headband with her tracksuit to sing the national anthem at the 1991 Super Bowl. Hillary Clinton donned a padded headband as first lady, then a super thin version as secretary of state. Carolyn Bessette-Kennedy opted for the tortoiseshell look. Would the style of "Clueless" be so iconic without headbands on Cher Horowitz and Dionne Davenport? As if!

"Headbands are such a potent place for personal expression," said Elizabeth Way, assistant curator at the Museum at FIT and co-curator of a forthcoming accessories exhibition, "Head to Toe." People must wear shoes or carry bags, but headbands are something "completely accessory," Way said. "Decadent" is how Sadoughi describes them.

Today's headband craze owes a special thanks to another queen bee: Blair Waldorf of "Gossip Girl." Hers were preppy, yes, and prim on occasion. But the embellished, oversize pieces had a hint of campy rebellion to them when worn tucked into tousled hair.

"In the beginning, people just didn't know how to wear headbands," said Behr, the designer. The teen drama gave people "a visual of how to have fun with them."

A HATBAND, IF YOU WILL

Back in summer 2018, Catherine, the Duchess of Cambridge -- née Kate Middleton -- arrived at her youngest son's christening in a towering Jane Taylor creation. The padded, woven piece was dotted with beads and topped off with a corsage's worth of faux flowers. It looked like a headband aspiring to be a hat; a hatband, if you will. "One could wonder if the Duchess just sparked a new trend of chunky headbands going forward," Marlen Komar at Bustle mused. A few months later, Prada sent a parade of padded headbands down the runway for its spring 2019 collection.

In the years since, the statement headband crowd has split into two factions, the have-knots and the not-knots (padded). Both have been bedazzled in a big way -- pearls, beads, rhinestones, bows. Babba Rivera, founder of the hair care brand Ceremonia, recently launched the Frida Headband, a voluminous braided piece inspired by Frida Kahlo. Eugenia Kim was so inspired by the inauguration fashion that soon her accessories brand will launch a capsule "Unity" collection with headbands in red and yellow, à la Gorman, but also the other colors on the stage, including vibrant purple and deep burgundy.

Today's bold pieces demand deliberateness. "It's not something you put on without thinking, it's something you pick out," said Carmen Myer, 31, a Montessori teacher in Houston. Myer has two dozen headbands, including a pink knotted pearl one. A parent mistook it for a costume on Halloween, commenting that she loved Myer's "princess" look. It was an aha moment for her. "This is what it projects to people," she said, meaning regalness.

As a new year dawned, Myer feared the headband trend could be waning. Then she saw Gorman at that podium, single-handedly securing the accessory's continued reign. It was particularly meaningful for Myer as a Black woman.

"It was a great way to show anybody can wear this. It's not just for a white woman who has straight thick hair," Myer said. "It could also be for braided, curly, kinky and coily hair."