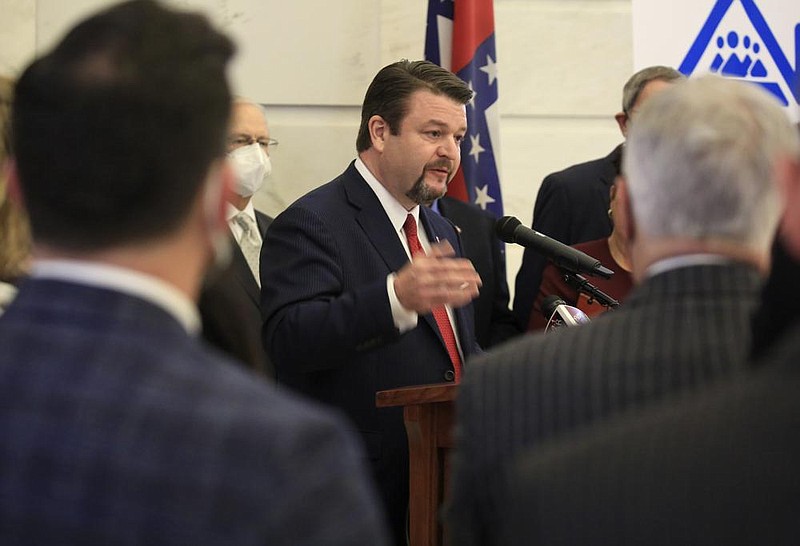 Sen. Jason Rapert, R-Conway, speaks Wednesday, Feb. 10, 2021 at the state Capitol during a press conference about his bill, SB6, that would ban all abortions except those to save the life of a mother. (Arkansas Democrat-Gazette/Staton Breidenthal)

The Arkansas Senate voted to pass a near-total ban on abortions Monday, sending the measure to the House.

Senate Bill 6, by state Sen. Jason Rapert, R-Conway, would prohibit all abortions except for those performed to protect the life and health of the mother.

Rapert has said the bill, if passed into law, is intended to force the U.S. Supreme Court to reconsider its precedent in Roe vs. Wade, in which the court held that a person’s right to have an abortion exists.

The Senate voted 27-7 in favor of SB6, after two senators sought — unsuccessfully — for Rapert to amend the bill and include exceptions for rape and incest.

All but one Democrat in the Senate voted against the bill.

State Sen. Jim Hendren, I-Sulphur Springs, proposed the amendment to include rape and incest exceptions, saying that similar provisions had been included in most anti-abortion legislation passed since the Roe decision.

State Sen. Missy Irvin, R- Mountain Home, also asked Rapert to include the exemptions, saying “I have no idea why we can’t reason together.”

Rapert said that SB6 did allow for emergency contraception that could be used by rape and incest victims.

“It is past time for us to abolish abortion,” he said.

Irvin later joined most Republicans in voting for the bill. Hendren voted present.