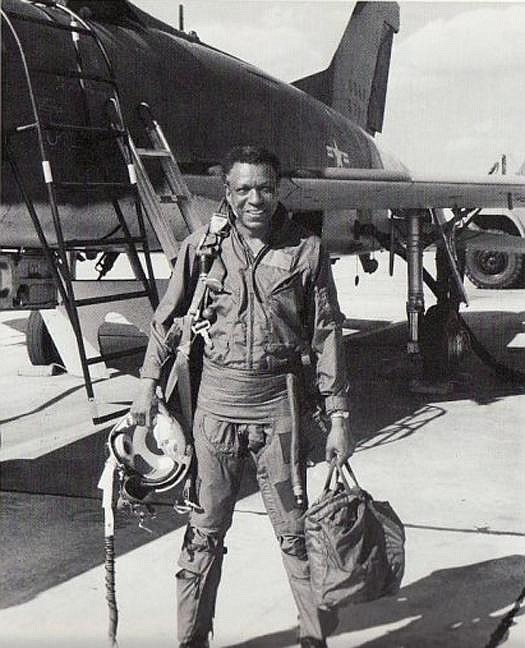 This week, ExplorePineBluff.com shines the spotlight on pilot and artist Roy LaGrone, whose magnificent artistic portrayals of the Tuskegee Airmen brought the stories of these heroes to a wider audience.

This is the third installment in ExplorePineBluff.com's monthlong look at notable people and events with Pine Bluff connections during national Black History Month.

The story of the Tuskegee Airmen is vividly immortalized because of Roy LaGrone's artistic portrayals of his fellow airmen and their exploits.

As one of the airmen who learned to fly at Tuskegee 70 years ago, LaGrone has been described as a "national treasure" whose artwork will be indelibly etched in Air Force history.

Born in 1921 in Pine Bluff, LaGrone discovered his love for flying as a teenager when he paid 50 cents to have a barnstorming stunt pilot take him up in a Ford Trimotor airplane.

"As soon as I got up there, I knew absolutely that this was what I wanted to do," he recalled.

After graduating from high school, LaGrone served in senior Army ROTC, Tuskegee Institute, with the rank of first sergeant. After completing Civil Pilot Training Program at Tuskegee in 1942, LaGrone was drafted into the Army Air Corps as a sergeant.

In the war, he was a member of the 332nd Fighter Group, one of four all-black fighter and bomber squadrons that fought in Europe. In the segregated armed forces, they were known as the Tuskegee Airmen because they trained at Tuskegee Army Air Corps Field in Alabama.

Following his time in Tuskegee, LaGrone was transferred to Caserta, Italy, a locale he would later describe as the only place in which he could "sit down in a restaurant and be treated like a customer."

LaGrone was honorably discharged from the Army Air Corps in January 1946. He studied fine arts and painting at the University of Florence in Italy before returning to the United States to study at the Pratt Institute in New York, graduating in 1949.

He served as illustrator and designer for Family Circle Magazine before joining the U.S. Department of State, where he created editorial layouts, mechanicals and illustrations for AMERICA, a full-color Russian-language picture magazine aimed at countries behind the Iron Curtain.

LaGrone also applied his talents as an art director for Avon Books, as senior artist at ABC Television, for Patent Magazine, for CBS television and as art director and graphics coordinator for the medical arts department at the Robert Wood Johnson Medical School in New Jersey.

In 1961, he was accepted by the prestigious New York Society of Illustrators as an artist member.

Though LaGrone found tremendous success as a commercial artist, his ultimate goal was to paint, for the Air Force Art Program, the Tuskegee Airmen with which he was so proud to serve.

LaGrone made it a lifelong project to tell the little-known stories about the nation's black Army Air Forces, and later United States Air Force, pilots through his paintings.

He was uniquely positioned to do this, being driven by his own Tuskegee Airman experience, his love of flying and aircraft, and his personal friendships with so many of Tuskegee's Heroes.

Thanks to LaGrone, the artistic spokesman for so many who needed to be seen and heard, the stories of the Tuskegee Airmen reached a much wider audience. Through his paintings, his long love of flying and the magnificent portrayals of his fellow airmen, LaGrone has sealed the images of these great heroic men into the history pages.

This article is among features at ExplorePineBluff.com, a program of the Pine Bluff Advertising and Promotion Commission. Sources: AskArt.com, Azul213.blogspot.com, AF.mil, The New York Times. 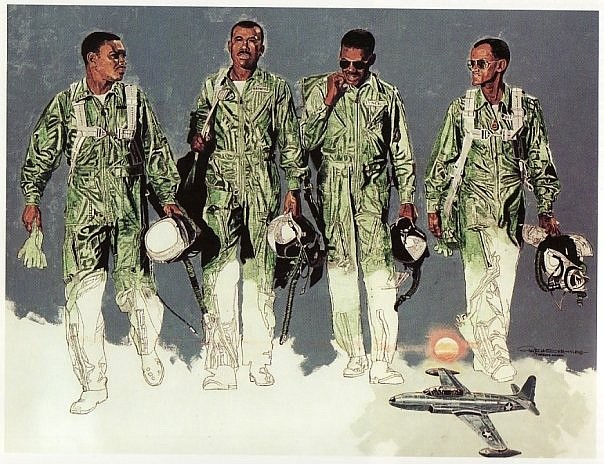 Roy LaGrone made it a life-long project to tell the little-known stories about the nation’s black pilots through his paintings. (Special to The Commercial)
ADVERTISEMENT