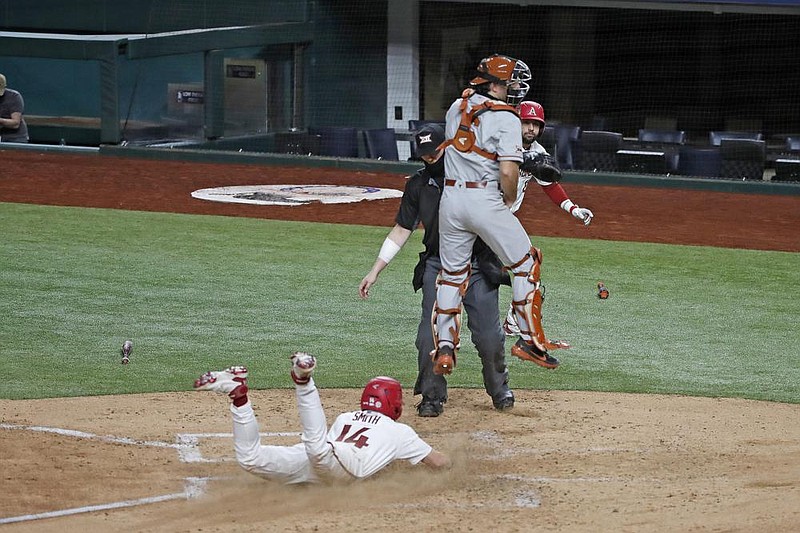 Brady Slavens homered and drove in four runs to back a sterling two-hit pitching performance as the No. 8 Arkansas Razorbacks blanked No. 9 Texas 4-0 in the Sunday nightcap at the College Baseball Showdown in Arlington, Texas.

Peyton Palette combined with Caden Monke (1-0) and Caleb Bolden for 15 strikeouts while holding the Longhorns to two singles.

Bolden, displaying a brand-new slider he developed last week, worked a four-inning save, striking out seven and allowing no hits on 56 pitches.

"To have a shutout like this on the stage that it's one, is just huge," Bolden said.

The official scorer gave Monke the win for posting two outs to get through the fifth. Often times in an early season game, the decision can be given to a performance like that turned in by Pallette, who was razor sharp in his first career start. The right-hander threw 72 pitches over 4 1/3 innings, allowing no runs on 1 hit and a couple of hit batsmen, with 8 strikeouts and 1 walk.

The Razorbacks snapped a two-game skid to the Longhorns over the last two seasons after beating the Longhorns 11-5 in a first-round game at the College World Series. Arkansas has won eight of the last 13 games in the series, which Texas has dominated historically.

Slavens, a junior designated hitter, drove in the only run the Razorbacks would need with a single in the fourth, then launched the team's first home run of the season in the sixth to give Arkansas some padding at 4-0. Both of the big hits came with two outs.

"The first at-bat, the pitcher left a slider up, and I put a good swing on it and got it through the hole," Slavens said. "Not missing a fastball when they give you one on the home run."

"He tried to sneak a fastball by him and he got every bit of it," Van Horn said.

Texas right-hander Tristan Stevens (0-1) making his first since 2018, was mostly sharp through five innings, not allowing a hit through three innings.

Pallette allowed only a single and a couple of hit batsmen and worked out of one jam in the third inning.

"Pallette did a tremendous job for us, just coming out and throwing strikes and getting us in the dugout," Van Horn said.

Monke relieved him in the fifth inning with one out and a runner aboard and quickly gave up a single to nine-hole hitter Murphy Stehly, who had both Texas hits. Monke escaped by coaxing a ground ball, that shortstop Jalen Battles and second baseman Robert Moore nearly turned into a double play, and a routine fly ball to center.

Pallette cruised through the first two innings with five strikeouts, using a 95 mph fastball to good effect. He struck out the side in the second inning on 12 pitches.

He ran into trouble with one out in the third inning, starting with a hit by pitch on catcher DJ Petrinsky after getting ahead 1-2. Stehly notched the first hit of the game, a single through the left side.

Pallette walked Austin Todd to load the bases with one out. He rallied to strike out Eric Kennedy then got Mike Antico to pop up Battles in short left field to escape damage.

Stevens got outs from the first 11 Razorbacks before giving up his first hit and immediately running into trouble in the fourth inning.

First baseman Cullen Smith reached on a two-out single up the middle to start the uprising. With Brayden Webb at the plate, Smith advanced on a passed ball from Petrinsky before Webb reached on a walk. Slavens got ahead with a 2-1 count, then the left-handed hitter drilled a bouncer through the right side to plate Smith.

"I know early on a lot of guys were hitting it hard right at people and not finding the holes, so I'm glad that got through," Slavens said.

Stevens tired in the sixth inning and the Razorbacks made him pay when Christian Franklin drew a out-out walk and advanced on a wild pitch before Smith drew a walk. Merryman relieved Stevens and struck out Webb looking to get on the brink of escaping the inning.

Slavens showed discipline on his at-bat before homering.

"The three-run homer, again with two outs, the pitcher had just gotten a big out and then Slavens took the first pitch, either a change-up or a cutter, which was just a little low," Van Horn said. "It was good to see him take that pitch."

Bolden struck out the first four Longhorns he faced and allowed just two base runners on a walk and a hit batter.

"I had my fastball today," Bolden said. "I had my changeup, although I didn't throw it much today. I developed a new slider this week and Coach [Matt] Hobbs was like, 'That's filthy. Throw it as much as you can.'

"Coming into the ball game in basically the middle of the game, I have the mindset of, 'This is my ballgame and I'm going to finish it.' When I came out of the eighth inning, that's when I told Coach Hobbs, 'I'm finishing this ball game.' And he was like, 'Yes, yes you are.' "