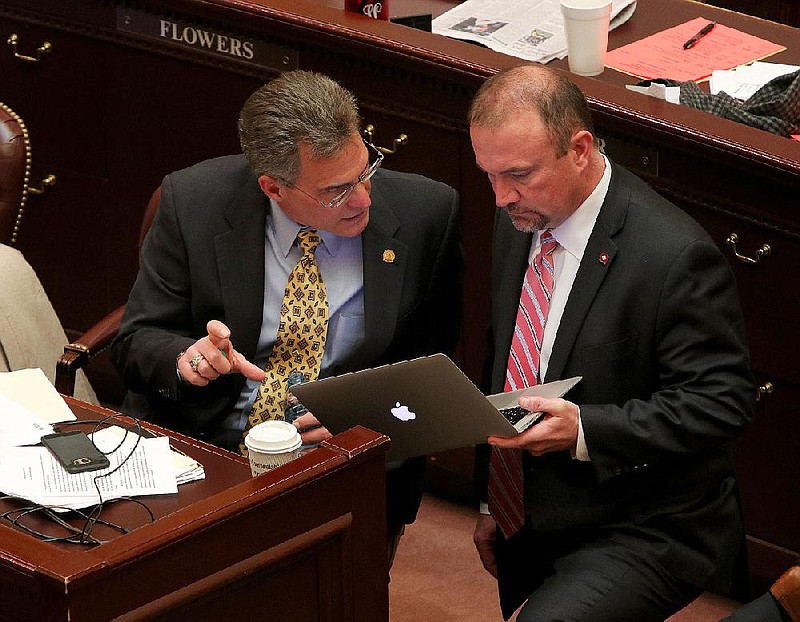 State Rep. Les Eaves (right), R-Searcy, listens to then-Rep. Charlie Collins on the floor of the state House in the Capitol in this March 2017 file photo.

The Arkansas House of Representatives is expected to consider today a bill that would exempt income that taxpayers received through certain federal coronavirus relief programs, including loan forgiveness under the Paycheck Protection Program, from individual and corporate income taxes.

The bill is House Bill 1361, by Rep. Les Eaves, R-Searcy, which cleared the House Revenue and Taxation Committee on Feb. 9.

The House also is expected to consider two other bills also approved Feb. 9 by the tax committee:

• Senate Bill 236, by Sen. Jonathan Dismang, R-Searcy, which would exempt federal and state unemployment benefits from state income taxes in 2020 and 2021.

• House Bill 1049, by Rep. Joe Jett, R-Success, which would allow recipients of unemployment benefits to authorize the state to withhold income taxes from those benefits, possibly starting in 2022.

House action on all three bills was delayed when the regular legislative session recessed because of the statewide snowfall.

HB1361 would change the state's Income Tax Act of 1929 to track certain provisions of federal coronavirus relief legislation, according to the state Department of Finance and Administration.

The bill would exclude from the definition of income the financial aid that a taxpayer received through certain federal coronavirus relief programs, including loan forgiveness under the Paycheck Protection Program; Small Business Administration grants under the Economic Injury Disaster Loan program; and payments received under the Coronavirus Food Assistance Program, the finance department said in its legislative impact statement on the bill.

The legislation also would permit the taxpayer to deduct otherwise allowable expenses incurred using funds from those three federal programs, according to the finance department.

If enacted, HB1361 would be effective retroactively to tax years starting on or after Jan. 1, 2019.

The finance department projects the bill would reduce state general revenue by $33 million in the current fiscal 2021, which ends June 30, and $179 million in fiscal 2022.

"Let's leave this money in the hands of our small businesses. Let that money circulate in the economy for years to come," Eaves said.

The state is seeing unprecedented surplus general revenue in fiscal 2021, in spite of the covid-19 pandemic, he said.

"This loan forgiveness process began in October of 2020 and as of January of 2021 approximately only 19% of these loans have been forgiven," Eaves said.

The federal Coronavirus Aid, Relief and Economic Security Act indicated that the forgiven loans would not be considered taxable income, and many states automatically conform to the Internal Revenue Code, but Arkansas does not conform to this code, so that's "why we need to act on this issue," he said.

"If we fail to update our tax code to conform to current federal tax code, we will wind up taxing this federal lifeline that was given from the federal government to our local businesses," Eaves said.

"It is important to remember that these loans received through the PPP allowed businesses to keep all of their employees on payroll, even as their machines sat idle in factories," he said.

This was a huge relief to businesses because many were not certain they would be in business a year from that point or not, Eaves said.

"Some businesses have recovered, with many feeling like they have weathered the storm, but now they could be in for a huge surprise this tax filing season if we don't act," he said.

"With tax filing season underway, scores of business owners are discovering that painful reality that these PPP loans could still carry a hefty tax bill, courtesy of the state of Arkansas," Eaves said. "This approach runs counter to the federal government's own treatment of the loans, which were seen as a crucial lifeline for small businesses amid the pandemic."

Bruno Showers, senior policy analyst for Arkansas Advocates for Children and Families, said in email to the House tax committee members that "as the fiscal impact notes, this is not a free lunch.

"It would reduce state revenue by more than $200 million over two years, and these benefits would likely skew heavily to those with higher income," he said.

"Scarce public revenue should instead be directed to those who have greater needs, or on public programs we know need strengthening, especially in these times," Showers wrote in his email.

"If the federal government isn't going to tax me on it, why would the state of Arkansas? It just doesn't make a whole lot of sense to me," he said.

"About this time last year, we actually had a little bit of revenue in our accounts. Right now, we don't."

The four businesses have an annual payroll of about $1 million a year, and "we have been able to retain a majority of our staff," Dugan said.

"Out of each quarter, we may have lost two employees from what it was in 2019," he said. "We have used the money for exactly what it was meant for, which was payroll, payroll taxes and rent and utilities and that's it."

Gary Cooper, managing partner of the Hogan Taylor LLP accounting firm in Little Rock, said, "There is obviously a revenue impact to the state for not taxing it, but .... they need this money to reinvest to keep people on payroll.

"Hopefully, when we come out of this [pandemic], that reinvestment back into the business will ultimately pay dividends to the state of Arkansas in future taxable income," he told the House tax committee.

"The PPP funding is intended for helping small businesses, and that's where it should stay," he testified.

SB236, which would exempt from state income taxes the state and federal unemployment benefits paid to recipients in 2020 and 2021, has the support of the finance department, said Paul Gehring, an assistant revenue commissioner.

Those who received unemployment benefits range from low to upper income, and "this pandemic has not spared any type of individual in terms of the amount of income that they are accustomed to receiving," Gehring said.

"The governor has been committed to providing tax relief for working Arkansans, both those that are traditional wage-earners to self-employed individuals," he said.

The finance department projects that SB236 would reduce general revenue in fiscal 2021 by about $51 million because of the $2.6 billion in state and federal unemployment benefits received in 2020, Gehring said.

In 2018 and 2019, about 65% of the unemployment benefit recipients who received a 1099 tax document reported the income on their tax return, so the finance department used the same percentage to generate the general revenue projection, he said.

The finance department projects SB236 would cut general revenue by $3 million in fiscal 2022.

The withholding authorized under HB1049, which would allow recipients of unemployment benefits to authorize the state to withhold income taxes from those benefits, could begin on benefit payments as early as Jan. 1, 2022.