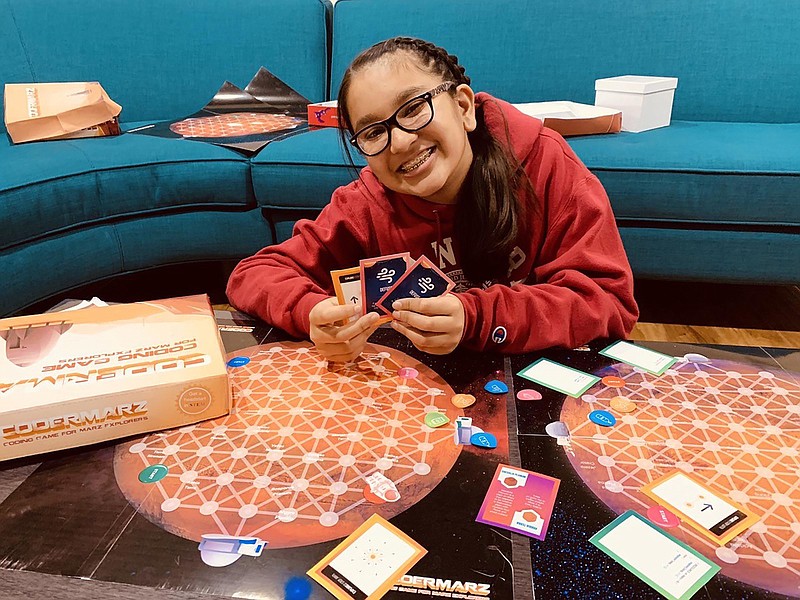 Samaira Mehta, who is 12 and lives in Santa Clara, Calif., became interested in coding at age 6. Her friends didn't share her enthusiasm. She thought a game might convince them that learning to code can be fun. So she invented a board game called Coder Bunnyz. She now has a business and two other coding-related games. (Photo courtesy of Coder Bunnyz)

When Samaira Mehta was 6 years old, her father played a prank on her.

"He showed me basically something on his computer which had one button and a command which said, 'Press this if you're beautiful.' And he told me to give it a try," she said.

As Samaira hovered her mouse pointer over the command, the button disappeared.

Intrigued, she asked her dad how he did it. He explained that he'd used something called coding, using a programming language that tells a computer what to do. That lighthearted moment inspired Samaira's passion for computer science. Now 12, she is founder and chief executive of CoderBunnyz, a business that aims to make coding fun for everyone.

After her dad's prank, Samaira was eager to learn coding tricks. Her father recommended a website with practice exercises. Scrolling down the page, she saw the words "make your own app." She tried following the instructions but made so many mistakes that "it made my whole screen just look red," she said. Frustrated, she gave up.

Samaira later realized that her experience was common for people new to coding. They "start with the hardest problems first, and that intimidates them." That's why it's so important to begin by learning the basic concepts, she said.

With her father's encouragement, Samaira started again. Eventually she was able to create the app that features a disappearing on-screen button. "That brought me a lot of joy," said Samaira, who lives in Santa Clara, Calif.

When she told her friends about her love of coding and encouraged them to try it, they weren't interested. Coding was "scary" and "boring," they said.

But Samaira was determined to change their minds. She asked her friends what they loved. Their answer? Games.

"Maybe I could put this coding thing into a board game," she recalled thinking, "and somehow make it fun for my friends."

She began to sketch ideas for a game featuring a bunny that travels through a maze to eat a carrot. In 2016, with support from her parents and after a lot of trial and error with designers, Samaira introduced CoderBunnyz, her first board game.

As she shared the game with her friends, she saw their attitudes about computer science begin to change.

"They were starting to think of it as something they could enjoy," she said.

Samaira wanted to teach more kids about coding. She asked libraries to let her host workshops, but because she was so young, "getting people to agree to do things with me was a huge challenge," she said.

With time and persistence, Samaira found people who believed in her. She began leading workshops and developed a successful track record.

Samaira invented two more coding board games: CoderMindz, which focuses on artificial intelligence, and CoderMarz, which shares facts about Mars and space. She also launched the "Yes, 1 Billion Kids Can Code" initiative to donate educational resources to children around the world.

During the coronavirus pandemic, Samaira created Boss Biz, an online program that teaches kids how to start their own business. About 200 people have participated.

Whatever you choose to do in life, having a basic coding understanding will help you succeed, Samaira said. "It gives us that mindset that we can take any situation, analyze it, and come up with the best potential solution."

4. Finally, learn JavaScript. This programming language is her favorite.