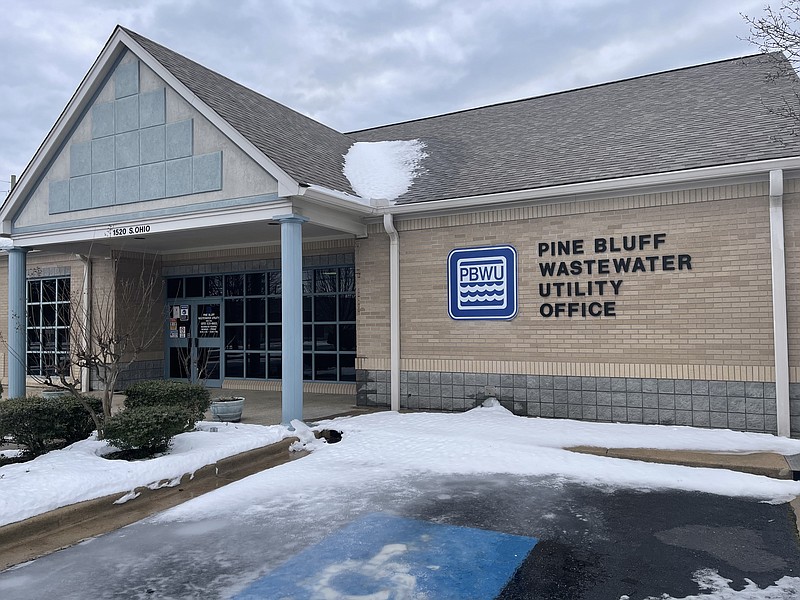 Officials at Pine Bluff Wastewater Utility have offered to help Liberty Utilities fix water line leaks in response to the water pressure problems that are plaguing the city. (Special to The Commercial)

From the city's fire department and UAPB to Jefferson Regional Medical Center and Saracen Casino, Pine Bluff is struggling to cope with a water system that has sidelined or shut down many operations because of a lack of water pressure.

In what might be an example of the most critical result of the water problem, two people who have been unable to get kidney dialysis treatment went into cardiac arrest, according to Mayor Shirley Washington. Their condition was unknown.

The low water pressure problem started Thursday evening, but as one day has led to another, patience has started wearing thin with the utility.

"We are very concerned about this," Washington said Sunday. "We're just in trouble all the way around."

Washington said nursing homes and funeral homes were also being affected by the lack of water.

"It's difficult when we're not 100% sure Liberty is being totally transparent with us," the mayor said.

She said the water utility, which provides water to the city of Pine Bluff, at first denied it had a line leak at one of its plants. Then it said a line leak at the plant had been repaired.

"So how do I know if you're telling us the truth about anything?" Washington said with exasperation.

Washington said she had been on the phone on Sunday with the state attorney general's office and Public Service Commission officials and that the consensus was that Liberty "didn't have a back-up emergency plan in place" and that the company "had not been forthcoming with the people who need information."

"It's just not good business," she said.

Liberty has said that the pressure problems are a result of water line breaks and burst pipes from the extended cold weather and because people have been leaving their faucets running to avoid their own broken lines.

Washington said that at first, kidney dialysis patients had been unable to get to U.S. Renal Care on 28th Avenue because of the snow and ice on the roads. She said those patients were then taken to the clinic by four-wheel-drive vehicle. But then the facility couldn't operate because it didn't have sufficient water pressure to run its dialysis equipment. The Arkansas National Guard then brought in a tanker to provide the needed water, but the guard was removing the tanker Sunday evening because the renal center is a for-profit business.

Washington said she and other officials were working on getting more water brought in, but the guard's action to remove the water tanker has upset a technical director at the renal center.

"They are going to remove this tank and make it impossible for us to provide life-sustaining treatment that patients need," said Eric Foster. "I'm not happy. I'm really not happy with my Army." Foster said he had served in the Army and was disappointed with its actions.

"I understand this," he said. "But this is an emergency. If this is about the money, screw the money. We will figure that out later."

Asked about the two people who went into cardiac arrest because they couldn't be treated, Foster said he was not surprised. He said the facility treats more than a 100 people, and if they have been unable to have dialysis in several days, the increased fluid in their bodies could cause a heart attack.

Attempts to reach the Arkansas National Guard were unsuccessful.

Another key area where low pressure could result in disaster is in the fire-suppression arena. Fire Chief Shauwn Howell said the low pressure at fire hydrants could create situations that, at best, require work-arounds.

"This thing hasn't had an impact, knock on wood," Howell said. "But this is serious, to say the least. It's definitely testing all of us, challenging all of us."

Howell said the fire department is not totally dependent on the water at a hydrant. Fire trucks have water tanks that hold 750 gallons and internal pumps so firefighters can use that water and may not even need water from a hydrant if they are dealing with a small fire.

But a bigger fire or one that requires a ladder truck could complicate matters, he said. A ladder truck, he said, needs additional water pressure because the water has to be elevated.

"Ideally, the hydrant refills a truck's tank as fast as the water is being used," Howell said. "If there isn't enough water or enough pressure to do that, you've got a problem."

Howell said he would not categorize the situation as dangerous to Pine Bluff residents. He said fire officials can send more trucks to fires to take advantage of the water they are carrying, with another option being to bring in tanker trucks from area fire departments.

"It's a challenge, no doubt," Howell said. "The one thing we cannot have is not have water. That is our lifeline for what we do. Having this problem could complicate things very quickly."

Howell said fire sprinklers in buildings could also be at risk of not working.

Ken Johnson, general manager with Pine Bluff Wastewater Utility, said he had been out with crews looking for line breaks and leaks and had identified five so far on Sunday. He said he had offered to help with repairs and was eventually given the green light by Liberty to fix a leak adjacent to its office in downtown Pine Bluff.

Johnson said information coming from Liberty had been "fragmented."

"We need someone to put some accuracy on it," Johnson said, adding that Liberty needs to tell the public what the cause of the problems was, what it was doing about the problems and when they would be fixed.

"We are committed to helping out," he said. "We have the manpower and equipment and we would be on the spot to help in any way possible."

"We had seven or more days of below-freezing temperatures," Davis said. "That's a precursor to disaster for water pressure and pipes. This is a crisis statewide and nationwide. This is not something that Liberty is doing. It's a disaster."

Davis said Liberty needs "boots on the ground" in order to identify as many leaks as possible. He said he believes that many of the problems could be in or around abandoned buildings and houses.

"I think we will find multiple leaks in those areas," he said. "That is why we are going to go property by property to look for those issues."

Davis said executives were coming to Pine Bluff and that on Sunday evening, a first status meeting would be held with area leaders, adding that the meetings would continue each day at 6:30 p.m. until the problems were solved.

At the University of Arkansas at Pine Bluff, some of the student residential areas lost heat because of the lack of water going to the boiler system. Those students have been moved to hotels.

At Jefferson Regional hospital, a fire truck carrying water and then a tanker truck had to deliver water to the boiler system last week so that heat could be maintained. Some hospital operations have been pinched back or interrupted in the process, although some areas are still operational.

"We will either treat and release them or stabilize them and transfer them if they need further care," Jamie McCombs, a spokesperson said Sunday, referring to patients. "We are still performing emergency surgeries and cardiac cath procedures. Our command center leadership team is here and we are still in contact with Liberty about the low water pressure problem."

Even Saracen Casino and Resort was laid low by the low-pressure problem. Carlton Saffa, a chief market officer, said the casino at first closed because of the bad weather but that it has remained closed since Thursday because of the water problems.

Saffa said February and March are two of the biggest months for casinos and to be closed a weekend during that period was "extremely expensive from a revenue position for the city and county and expensive for my employer. The timing is awful."

Saffa, however, said the monetary loss did not compare to the other problems going on around town.

"Our story is sad," he said. "The worst part is what's going on at the hospital and what they are having to go through."

Saffa, like others interviewed on Sunday, chided Liberty for what he said was a lack of communication to let the public know what is going on. 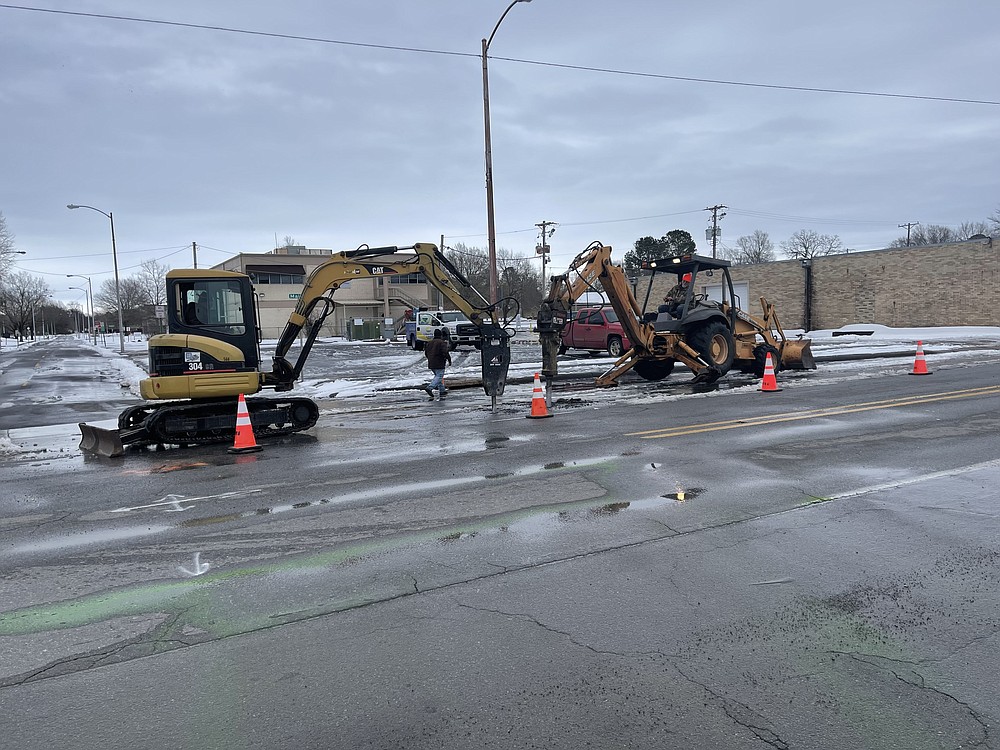 A crew with Pine Bluff Wastewater Utility work Sunday to fix a water leak in downtown Pine Bluff. (Special to The Commercial)
ADVERTISEMENT