OPINION | OLD NEWS: Snowed under in another February ’21 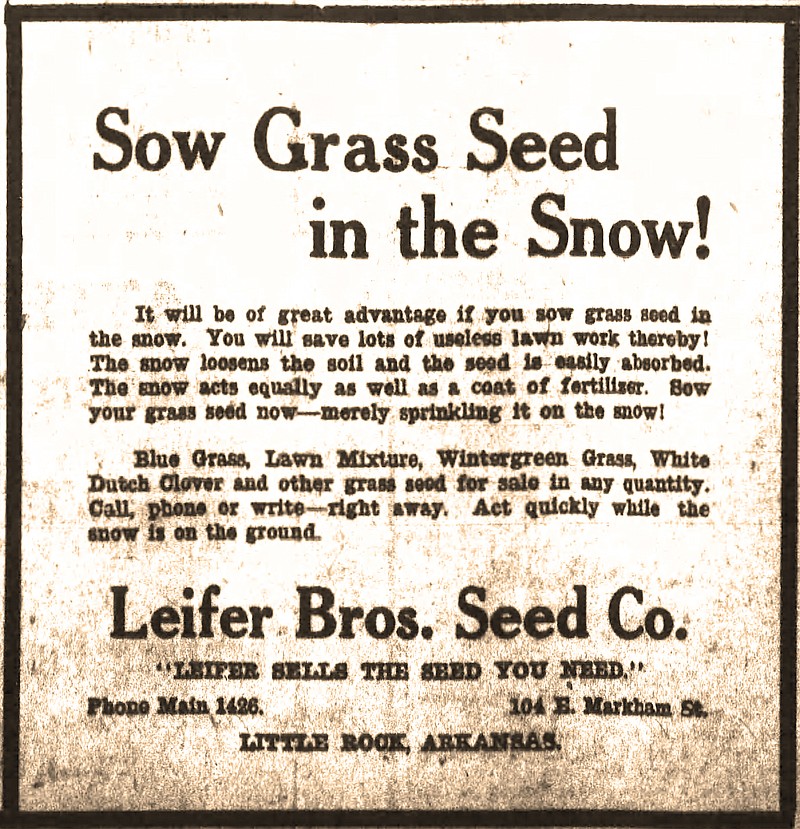 This ad appeared in the Arkansas Gazette on Feb. 19, 1921, the day after 11 inches of snow fell at Little Rock. (Arkansas Democrat-Gazette)

Many suffered danger and woe during recent events we will file under "2021: Pandemic Made Colder," but Old News was merely thwarted.

Thwartation can be vexing, but Old News was not much vexed. I had two fine old news stories to research for this column.

I still have them. One features funny Arkansas Gazette reporting about the state legislative session of February 1921; the other is about the first Sunday morning edition of the Arkansas Democrat, which was published at Little Rock on Feb. 27, 1921.

The story of the afternoon newspaper's venture into Sunday morning competition has to its credit 200 newsboys with whistles. But I was more eager to share that Gazette legislative story. It's a hoot. And it raises questions that inquiring minds will want to see answered by an actual historian. One of those, a live one — state archivist David Ware — likes it, too, and wants to help us find answers.

Sadly, he has no wings. Before Ware could look into whatever the state archives might contain pertaining to the 1921 Legislature, 8 to 20 glittering inches of snow blanketed Little Rock between his home and office — which wasn't open anyway.

So, Old News turned to the Democrat archive, to find ... a placard where that first Sunday morning issue should appear in our microfilm: "Page(s) Missing Not Available." More placards stand in for successive Sundays. I don't have the first Sunday Democrats.

But I do have the house ads that preceded them, as well as a loooong front-page self-commendation by editor Elmer E. Clarke. These I have gathered into a gallery for your amusement: See arkansasonline.com/222sun.

Note that in 1921, the Democrat occupied 613-615 Main St. -- the building that today hosts Three Fold Noodles & Dumpling. For further context, remember that while the paper was preparing for its new edition, the Rev. James L. Delk was suing it for $30,000. (See arkansasonline.com/222delk.)

And — oh, yeah, a blizzard had just clobbered the state. During what had appeared to be a mild February, with fruit trees and late winter crops progressing toward spring, massive weights of snow suddenly descended.

Dardanelle's reporting station was buried most deeply, with 22 inches of snow.

“Barns and sheds collapsed under the weight of snow, and many roofs were warped and strained. A private garage and tool house was badly wrecked, and the veranda at the home of Mrs. Lulu Standridge crashed to the ground and was broken in three pieces.”

At Mena, W.E. Watkins' 100-by-40-foot cattle-feeding shed collapsed. Two of his 200 Angus cattle died, and many cows were injured.

After 15 inches covered Fort Smith, the head bookkeeper of the Merchants National Bank survived a close call. F.A. Moore was at his desk when so much snow avalanched off the roof that it shattered a window. The snow drove a long sliver of glass through 50 pages of the record-book he was bent above. He suffered minor cuts on his head.

The 11 inches reported at Little Rock collapsed the roof of a temporary, wood-frame gymnasium annex on the campus of Little Rock High School, which had too many students enrolled to fit inside the regular gym at 14th and Scott streets (better known today as the former East Side Junior High). The annex was empty at the time.

A streetcar on the Highland Avenue route left its tracks near the 13th Street viaduct and ambled into a front yard. No one was hurt and the car was soon dragged back and re-railed.

But while many businesses closed for the day, the city didn't shut down. Tracks were cleared, and transportation, while delayed, happened. Many automobiles were abandoned in drifts and on the sides of steep hills, but some autoists got around by following the streetcar rails.

Meanwhile, Little Rock police were busily knocking on doors downtown to inform occupants that city ordinance No. 2479, dated Jan. 21, 1918, required them to clear their sidewalks. Failure incurred fines up to $25 a day, with each day constituting a separate offense. The Gazette quoted a statement by Police Chief C.C. Rotenberry:

"All snow and sleet must be immediately removed from the sidewalk by the person who occupies the buildings or if vacant the owners of the property in front of their respective places of business.

"It is very necessary that this ordinance is complied with and each person must be notified to immediately comply with this ordinance and upon failure to do so must be ordered into court for violation of same."

That storm happened on a Friday. Saturday morning's Gazette carried an ad for the Leifer Bros. Seed Co. The company's motto was "Leifer Sells the Seed You Need." Its address at 104 E. Markham St. would place it today somewhere underneath the Statehouse Convention Center. The ad says:

Sow Grass Seed in the Snow!

The ad promises that "you will save lots of useless lawn work thereby!" Also, that the snow "loosens the soil and the seed is easily absorbed."

"The snow acts equally well as a coat of fertilizer. Sow your grass seed now — merely sprinkling it on the snow!"

What a concept. Just scatter the grass seed lightly over the snow, no need for mulch or tedious watering. Why, oh why aren't we doing this today?

Janet Carson, whose four decades' worth of horticultural expertise is on display every Saturday in Style, says, "Snow would not be of any use to us for growing the grasses we grow today."

Today, Arkansans grow summer grasses, she explains. The most popular are Bermuda, zoysia, St. Augustine and centipede, in that order. Those seeds won't germinate in cold soil. Gardeners "would be throwing their money away," she says.

The list of seeds mentioned in the Leifer ad — blue grass, wintergreen grass and white Dutch clover — do germinate in cold soil. She theorizes that in the 1920s, Arkansans planted spring lawns using these cool-loving seeds. Springtime is rainy and so lawns grew easily. She doubts they planted summer lawns. "They didn't water lawns then," she notes — there weren't yet garden hoses or home faucets designed for that.

"People used to sweep their yards," she says. "They would sweep the dirt."

White Dutch clover is coming back as a lawn plant, with homeowners who like a less rigidly shaved look using it for its soft mounds and sweet flowers, which attract pollinators. But to most lawn-growing Arkansans, she says, clover still looks like a weed.