Governor vows action after power grid’s failure in storm by Compiled by Democrat-Gazette Staff From Wire Reports | February 22, 2021 at 7:15 a.m. 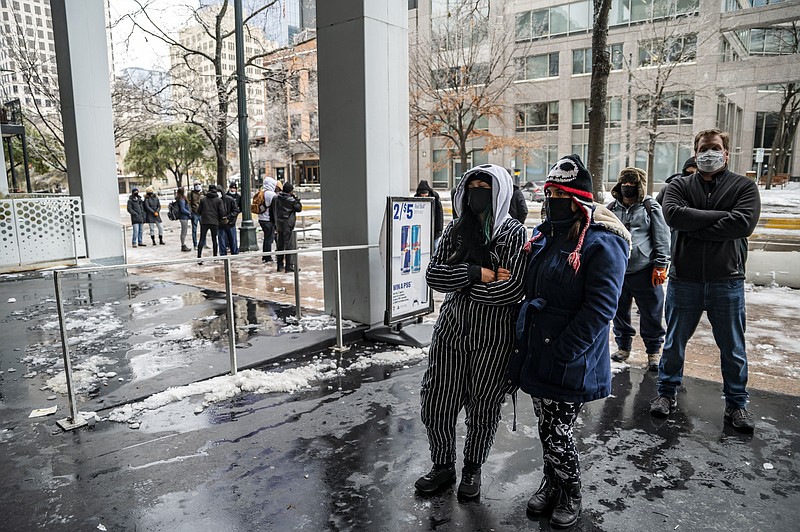 People wait in line outside a 7-Eleven store in Austin, Texas, on Wednesday, Feb. 17, 2021. MUST CREDIT: Photo for The Washington Post by Sergio Flores

As Texans grapple with spiking energy bills, water restrictions and a growing death toll from last week's winter storm, the White House said Sunday that President Joe Biden is "eager" to visit and could head there as soon as this week.

"He is eager to go down to Texas and show his support," White House press secretary Jen Psaki said Sunday on ABC's "This Week." "But he's also very mindful of the fact that it's not a light footprint for a president to travel to a disaster area. He does not want to take away resources or attention."

"We certainly would welcome him," Turner said on CBS' "Face the Nation," adding: "He would not be a distraction, neither a burden."

The storm, which contributed to at least 76 deaths in eight states, also knocked out power for millions of people during brutally cold weather.

About 30,000 Texans were still without electricity Sunday because of downed power lines and other equipment failures. Gov. Greg Abbott said during a news conference that he expected all service to be restored by Sunday night or today.

[Video not showing up above? Click here to watch » https://www.youtube.com/watch?v=FxcebbCqlRM]

Nearly 230,000 customers across the South were still without power as of Sunday, according to PowerOutage.us, a website that tracks power outages. Other large outages were reported in Mississippi, West Virginia, Kentucky and Oregon.

Abbott said Sunday that he was concerned about the threat of large electric bills after wholesale energy prices skyrocketed while power plants were offline. He said it would be the "top priority" for the Legislature, and he vowed not to end the legislative session until lawmakers ensure that the state's power grid is retrofitted to handle extreme winter and summer weather.

The state's increasingly popular, variable-rate electricity plans offer a potentially lower-cost alternative to traditional fixed-rate energy payments, but in a crisis situation they can saddle customers with outsize bills. The spike in prices left many Texans with dizzying bills in the wake of the storms -- in some cases more than $17,000.

"We are about to see a wave of bankruptcies, foreclosures and evictions as these bills hit consumer and retailer mailboxes," said Robert McCullough, a consultant and former utilities executive who has testified before Congress.

McCullough noted that electric companies are profiting from the price spikes. Those serving Texas' main power grid -- the portion managed by the Electric Reliability Council of Texas -- garnered $40 billion in revenue, according to his estimates.

"Somebody won big," McCullough said. "That's not all profit, but I suspect most of it will be."

The Electric Reliability Council of Texas, which manages about 90% of the state's electric load, is facing a state investigation and two lawsuits arguing that its preparation, or lack thereof, for extreme cold left residents freezing and in the dark.

Texas Attorney General Ken Paxton said Friday that he was launching an investigation into how the council and power companies had "grossly mishandled" the winter storm.

An Electric Reliability Council of Texas official defended the decision to trigger rolling outages, saying in a statement Saturday that it had been the "right choice to avoid a statewide blackout."

With Biden signing a major disaster declaration that will allow much of the state to tap reserves of federal aid, Rep. Michael McCaul, R-Texas, suggested that the federal assistance would be used to help those facing spiking power bills.

"The current plan is, with the federal assistance, to be able to help the homeowners both repair -- because we have a lot of water leaks, a lot of water damage, pipes bursting -- but, also, their electricity bills as well," McCaul said Sunday on CNN's "State of the Union."

He said federal assistance is "what Texas needs right now so desperately. A lot of people are hurting right now."

Turner agreed that consumers should not be saddled with the astronomical power bills.

"For these exorbitant costs, it's not the consumers who should assume that cost," he said on "Face the Nation." "They are not at fault for what happened this week. The bills should go to the state of Texas."

The White House's disaster declaration followed similar state-of-emergency notices in Louisiana and Oklahoma, which will allow the general public and business owners to apply for temporary-housing grants, home-repair loans and other emergency aid.

It offers individual assistance to 77 of 254 Texas counties, including the areas around Houston, Dallas and Austin, but it does not cover the entire state.

Abbott said Saturday that the White House's "partial approval is an important first step." The White House and the Federal Emergency Management Agency said more counties could be covered as government officials continue assessing the damage. Michael Hart, a spokesperson for FEMA, said major disaster declarations "routinely begin with an initial set of counties for which damage information is available."

In recent days, FEMA has provided generators, food, water and other supplies statewide.

Asked about the partial declaration on "This Week," Psaki said the White House has been in "very close touch with Gov. Abbott."

"What happens here is the governor requested a federal disaster declaration. The president asked his team to expedite that," she said. "And FEMA determined where the counties should be -- where it should focus the immediate resources, where the counties that are hardest hit, so that they can make sure they get to the people in most need."

Last week's winter storms have been blamed for at least 76 deaths, according to data compiled by The Washington Post and The Associated Press. Half of those deaths occurred in Texas. Eight states have at least one confirmed death.

The identities of most victims still aren't known. Authorities have confirmed the ages of fewer than half, but of those, 23 were 50 or older and six were 85 or older.

Where the weather is coldest, some have resorted to risky, last-ditch attempts to keep warm, using gas grills indoors or running cars inside closed garages. At least five people have died of carbon monoxide poisoning.

Others seem to have frozen to death. At least 17 people died of hypothermia or "exposure." Some of them were among society's most vulnerable.

Early Thursday, a man was found lifeless in a parking lot north of Houston. He was wearing a jacket with no shirt beneath, authorities said. He had no shoes and no socks.

Another person was found dead about 350 miles northwest, in Abilene, and the local fire chief described the victim as "a transient" who had been sleeping outside.

Even some of those with shelter succumbed.

In rural eastern Kentucky, two elderly women from Ashland -- a city of 20,000 on the banks of the Ohio River -- died in 48 hours, both of hypothermia. One woman, age 77, lost power in her home, Boyd County Coroner Mark Hammond said. Her family, blocked by ice and felled trees, couldn't reach her and couldn't contact her. She was found on Wednesday.

Still others have died in cold-weather accidents -- in cars and on foot.

In Louisiana, a 77-year-old man in Calcasieu Parish slipped, fell into a pool and drowned. And in Lafayette Parish, a 50-year-old man died after slipping on ice and slamming his head on the ground.

A 10-year-old boy died in Shelby County, Tenn., after falling through ice into a pond with his 6-year-old sister, who is in critical condition. When authorities arrived at the scene, it was just 14 degrees.

The boy is one of three known victims under the age of 12. Another, identified by Univision as Cristian Pineda of Texas, was 11.

States across the South also grappled with water shortages Sunday as temperatures in some areas climbed as high as the mid-60s.

As of noon Sunday, more than 11 million Texans were under orders to boil tap water before drinking it and another 120,000 were without any water because public water utilities remained hindered, according to figures from the Texas Commission on Environmental Quality.

After temperatures plunged as much as 40 degrees below normal last week, the temperature in Houston climbed into the 60s on Sunday. The city lifted its boil-water advisory on Sunday afternoon.

Houston Methodist Hospital spokeswoman Gale Smith said water had been restored Sunday at two community hospitals in the system, which was dealing with an influx of dialysis patients after their local centers closed.

A rural hospital in Anahuac, Texas, about 50 miles east of Houston, lost both water and power during the storms.

William Kiefer, CEO of Chambers Health, which runs the hospital along with two clinics and a wellness center, said the facilities resorted to backup generators and water from a 275-gallon storage tank. They refilled it three times using water from a swimming pool in the wellness center.

Water was restored Thursday, and operations had returned to normal on Sunday, he said. The health system plans to look into installing more sophisticated backup systems, he said.

Memphis Light, Gas & Water issued a boil-water advisory Thursday out of concern that low water pressure caused by problems at aging pumping stations and water main ruptures could lead to contamination. The advisory was still in place Sunday; utility officials said they did not know when they might lift it.

About 260,000 homes and businesses were under the advisory. Hospitals and nursing homes have been forced to switch to bottled water. The Tennessee National Guard was supplying water to critical services such as area hospitals.