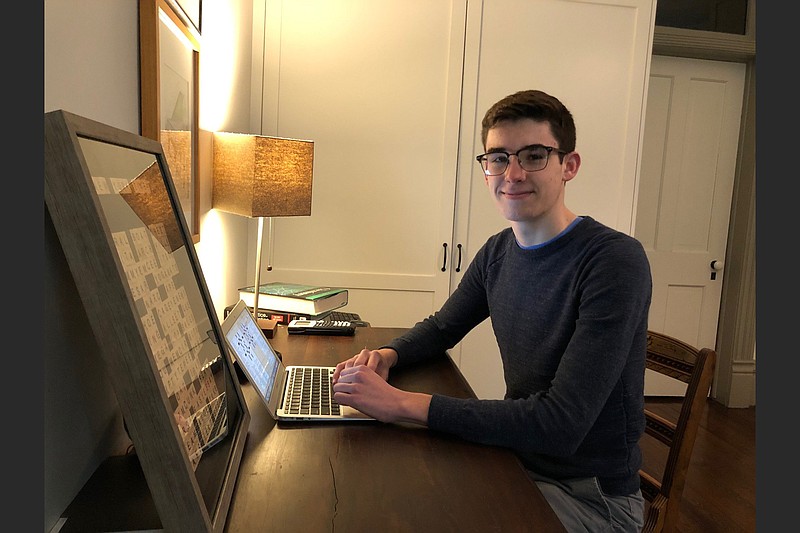 Simon Marotte, 16, works on constructing a crossword puzzle at his home in Conway. Marotte has had three crossword puzzles accepted by The New York Times. The first is set to run March 9. (Arkansas Democrat-Gazette/Sean Clancy)

A Conway teenager has found instant success as a cruciverbalist.

His interest in crosswords was first sparked while combating boredom in class.

"I didn't have the normal path of solving them for a long time and then getting into constructing," Marotte says. "I didn't really solve crossword puzzles until about a year ago. I remember being in health class and I was bored. I looked online and there was some USA Today puzzle I did."

He wasn't that good at first, he admits, but during quarantine, with time on his hands, he began to improve.

He also decided to make his own.

"I was just amazed that people could actually do it," he says.

After reading a Times how-to article, he put together a handmade puzzle with the theme Antonomous Flicks.

"It was movie titles that were antonyms, so 'The Godfather' would be 'The Godmother,'" Marotte says. "It was pretty bad."

Still, he wondered what to do next. Where to go with this new crossword interest?

Enter Victor Fleming, the Little Rock traffic court judge and seasoned crossword creator who has placed more than 40 puzzles in The Times.

Marotte's grandfather, Michael Wilson, contacted Fleming who then emailed Marotte and a crossword kinship was formed.

"His story is amazing," Fleming says. "Three acceptances inside of six months is something I've never had happen to me."

Marotte is one of the youngest contributors to be accepted by The Times, says Will Shortz, the newspaper's puzzle editor. Not that his age was taken into consideration.

"He is held to the same standards as everybody else," Shortz says. "We get somewhere around 200 entries per week and we can publish only seven, so the competition is fierce. That's another thing that is impressive about Simon. Your odds of getting a yes are not so strong, but his puzzles are just as good as anyone's."

Marotte and Fleming began meeting via Zoom in June to discuss crosswords and work on puzzles.

"I've been real lucky," Marotte says. "I think the number one thing is that I got in contact with Vic and I started my mentorship with him. He's been kind enough to offer his wisdom and encouragement."

"He was a quick study right from the get-go," says Fleming, who has mentored many crossword makers. "He picked up on everything I was saying. He had several ideas for puzzle themes. We worked on them, accepted some, rejected others and went through a three-to-four week program that I teach on the different steps to making a puzzle."

Those steps include theme development, grid construction, filling the grid and writing the clues, Fleming says.

"From the standpoint of efficiency, it's a process that needs to go in that order and each needs to take a respectable amount of time," Fleming says.

It takes him anywhere from 3-4 days to a week to finish a puzzle, Marotte says.

A good puzzle has a "fresh theme — assuming the puzzle has a theme — that is elegantly and consistently done," Shortz says.

A collaboration between Marotte and Fleming resulted in Marotte's first acceptance by The Times.

For that puzzle's theme, Marotte was originally drawn to gramograms, a letter or group of letters which can be pronounced to form one or more words.

"For example, the word 'Emmy' sounds like the letters M and E," Marotte explains, sounding uncannily like Shortz describing the on-air quiz during the Sunday Puzzle segment on NPR's Weekend Edition.

Fleming recommend some tweaks and the puzzle the pair created was accepted in November.

The first publication of a Marotte puzzle is set for March 9, Shortz says. It was accepted on Dec. 31 and features a theme that impressed the longtime editor.

(Spoiler alert! Crossword workers may want to skip the next two paragraphs if they don't want to know the theme and a couple of the answers ahead of time.)

The theme of that puzzle is cars in reverse inside words.

"So the phrase 'False Teeth' has the word 'Tesla backwards,'" Marotte explains. "The name 'Laura Bush' has 'Subaru' backwards in it."

The first crossword appeared in 1913 in the New York World, Fleming notes, and the crossword craze started booming in the 1920s. Marotte is among five Arkansans, including Helen Pettigrew, George Rose Smith, Judith Dalton and Fleming, who have had puzzles selected by the Times, Fleming says.

For someone who hadn't paid a lot of attention to crosswords before last year, Marotte says looking for new puzzle ideas has become a habit.

"I do find myself being more thoughtful about language and trying to pick up on things that might lend themselves to a puzzle."