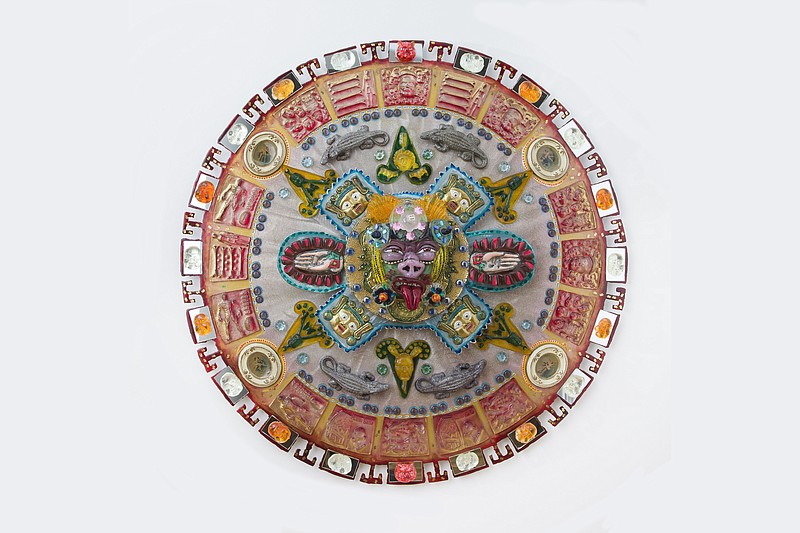 "¿Qué me ves? (What Are You Looking At?)," blown glass, cast resin and found objects on painted plasma-cut aluminum by Einar and Jamex de la Torre, is part of the Arkansas Museum of Fine Arts Foundation Collection, currently on display at the as part of the “Crafting America” exhibit at Crystal Bridges Museum of American Art in Bentonville. (Special to the Democrat-Gazette)

Glass artists and collaborating brothers Einar and Jamex de la Torre, will discuss, virtually, their more than three-decade career with Brian J. Lang, chief curator of the Arkansas Museum of Fine Arts and Windgate Foundation curator, in: "What Are You Looking At? The Art of Einar and Jamex de la Torre," 7 p.m. Thursday. The talk will also focus on their work in the museum collection. "Admission" is $10, free for members. Register at my.arkansasartscenter.org/136/238.

The grand prize includes the commercial airing on live TV on the two stations and on the Facebook pages of all four partners, $200 in gift cards to downtown shops and restaurants and a free one-year Cinema Society membership and a ticket to its Filmland festival. The video "must be appropriate for all audiences" and "may not be profane, sexist, racist, offensive or overtly political."

Entry deadline is midnight March 16; upload videos to YouTube and email the video link to DowntownPartnership@DowntownLR.com (include your full name and phone number in the body of the email). Visit DowntownLR.com/news.

The Arkansas Symphony Orchestra is celebrating the second anniversary of the premiere of "No Tears Suite" with a rebroadcast of its original 2019 performance of a symphonic arrangement by bassist Rufus Reid of the piece by jazz pianist Chris Parker and singer Kelley Hurt, 7 p.m. March 6 online via ArkansasSymphony.org. The orchestra is working with its original partners, Oxford American magazine, the Mosaic Templars Cultural Center and Central High School on the rebroadcast. Melba Patillo Beals' memoir "Warriors Don't Cry," about the 1957 Little Rock Central High School desegregation crisis, inspired the piece. Members of the Arkansas Symphony Orchestra joined jazz musicians, including Grammy-winning drummer Brian Blade, to perform the arrangement. Geoffrey Robson conducted.