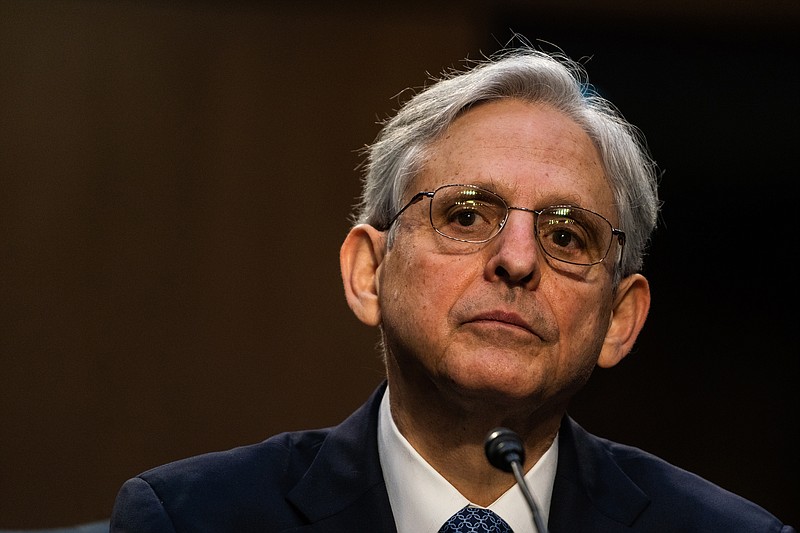 WASHINGTON -- Attorney general nominee Merrick Garland said Monday that, if confirmed, his first order of business will be the sprawling investigation into the U.S. Capitol riot, as he more broadly vowed to stamp out the rising threat of domestic terrorism and restore public faith in the Justice Department.

Testifying at his confirmation hearing before the Senate Judiciary Committee, Garland drew parallels to past domestic terrorism threats, including the Ku Klux Klan and the prosecution he led of Timothy McVeigh in the bombing of a federal building in Oklahoma City in 1995 -- one of the deadliest such attacks in U.S. history.

His remarks made clear that if he's confirmed, his tenure will be defined by how he responds to the Jan. 6 riot, which resulted in five deaths, and to the broader threat it exposed.

"We are facing a more dangerous period than we faced in Oklahoma City at that time," Garland said, promising the ongoing investigation would center not just on the rioters, but on those who aided them.

[Video not showing up above? Click here to watch » https://www.youtube.com/watch?v=2mkuqFI7Lo0]

"We begin with the people on the ground and we work our way up to those who are involved and further involved," Garland said, adding later, "We also have to have a focus on what is happening all over the country and on where this could spread, and where this came from."

Garland, a federal appeals court judge, is expected to be confirmed with bipartisan support in the Senate, where Republican lawmakers in 2016 refused to vote on his nomination to the Supreme Court. A second panel featuring outside witnesses is scheduled today, and a confirmation vote is expected in early March.

Monday's hearing, which lasted less than seven hours with some breaks, was mostly congenial even as Democrats and Republicans pressed the nominee on how he would manage the department and aired grievances about previous administrations.

Republicans sought to extract promises on specific investigations and prosecutions in politically sensitive cases, particularly special counsel John Durham's review of the FBI's 2016 investigation of Donald Trump's campaign. As Democrats asserted the Justice Department had been politicized in the Trump administration, Republicans expressed displeasure with actions during former President Barack Obama's administration and asked Garland to assure them he would not return to Obama-era policies.

Garland said he saw "no reason" to end the Durham probe -- though he also declined to provide a firm commitment to giving Durham the time and resources to finish his work. Sen. Charles Grassley, R-Iowa, the committee's ranking GOP member, pressed Garland on whether he would remove Durham only "for cause."

Garland said "there were certainly serious problems" with applications for surveillance during the FBI's Russia investigation, and that he intended as attorney general to speak more deeply about the issue with the Justice Department's inspector general and with the FBI director.

"I understand that the Delaware U.S. attorney was permitted to stay on as U.S. attorney, and I, again, have absolutely no reason to doubt that was the correct decision," he said.

Garland declined to answer when asked about whether he supported carrying out the federal death sentences of those already convicted of crimes, including the defendant in the Boston Marathon bombing and the white supremacist who shot and killed nine members of a black church in 2015.

He said he supported the death penalty for McVeigh and harbored no regrets, but that his views had since evolved. Now, Garland said, he had "great pause" about the death penalty because of its disproportionate impact on Black Americans and other minority communities, and because of the number of defendants being exonerated by new DNA evidence.

He hinted that the Justice Department is likely to return to its posture in the Obama administration, when there was a moratorium on executions while officials reviewed the agency's protocols, even as it continued to seek and win death sentences in some trials. Biden opposes the death penalty and has said he will work to end its use.

"I expect it's not at all unlikely that we will return to the previous policy," Garland said, adding later, "I would not oppose a policy of the president because it is within his authority to put a moratorium on the death penalty in all cases and instead to seek mandatory life without possibility of parole, without any consideration of the facts of any particular case."

The Trump administration restarted federal executions for the first time since 2003, and under Trump the government carried out the highest number in a single year.

Garland, 68, told lawmakers that his confirmation would be "the culmination of a career I have dedicated to ensuring that the laws of our country are fairly and faithfully enforced, and the rights of all Americans are protected." He repeatedly promised independence from the White House on law enforcement matters.

"I have grown pretty immune to any kind of pressure other than the pressure to do what I think is the right thing, given the facts and the law," he said. "That is what I intend to do as the attorney general. I don't care who pressures me in whatever direction."

Before becoming a judge and the high-profile political feud over his Supreme Court nomination, Garland was best known in legal circles for his role guiding the investigation and prosecution of McVeigh, the man who detonated a bomb outside a federal building in Oklahoma City in 1995, killing 168 people.

Garland said his previous work is particularly relevant now, noting that if confirmed he will supervise the prosecutions of white supremacists and others who forced their way into the Capitol last month, an event he called "a heinous attack that sought to disrupt a cornerstone of our democracy: the peaceful transfer of power to a newly elected government."

At one point in the hearing, Garland held back tears as Sen. Cory Booker, D-N.J., asked him about the hate and discrimination faced by his family.

"I come from a family where my grandparents fled anti-Semitism and persecution. The country took us in, and protected us, and I feel an obligation to the country to pay back, and this is the highest, best use of my own set of skills to pay back," Garland said. "So I very much want to be the kind of attorney general that you're saying I could become, and I'll do my best to become that kind of attorney general."

Garland said that as he receives briefings on the Capitol riot, he will seek to determine whether U.S. laws are sufficient for prosecuting wrongdoers and stamping out domestic terrorism. He said he did not oppose a legislative commission to look into the matter, as Democrats and some Republicans have signaled, but emphasized that he hoped lawmakers would ensure their work did not interfere with prosecutors' investigation.

Garland also signaled the department was likely to continue rolling back Trump law enforcement policies -- for example, resuming broad investigations of police departments, resulting in court-enforced consent decrees, that were largely abandoned in the Trump administration.

"Where they are necessary to assure accountability, it's very important that we use that tool," Garland said.

Garland has spent the past two decades as a federal appellate judge in Washington and is known as a moderate with a knack for building consensus. More than 150 former Justice Department officials have written to Congress supporting Garland's nomination, including former Attorneys General Loretta Lynch, Michael Mukasey and Alberto Gonzales, along with 61 former federal judges. Other backers include civil rights groups, the Fraternal Order of Police and the International Association of Chiefs of Police.

Sen. Mike Lee, R-Utah, pressed Garland for new insight into his views on gun rights and the Second Amendment. In 2007, Garland voted to rehear a D.C. Circuit decision striking down Washington's restrictive ban on handguns. Garland said he voted to revisit the ruling, and to give the city another opportunity to defend the ban, because it was the first time an appeals court had declared an individual right to keep and bear arms -- a ruling eventually upheld by the Supreme Court.

"It's not a vote on the merits of the case," Garland said in response to a question from Lee. "I thought this was an extremely important issue, important enough since it was the very first time."

Garland said he supports universal background checks for gun owners to ensure, for instance, that convicted felons are not able to obtain firearms. He declined, however, to state his personal view of bans on certain guns supported by Biden.

"The role of the Justice Department is to advance the policy program of the administration as long as it is consistent with the law," he said.

Information for this article was contributed by Matt Zapotosky, Ann E. Marimow and Devlin Barrett of The Washington Post; and by Michael Balsamo, Eric Tucker and Mary Clare Jalonick of The Associated Press.