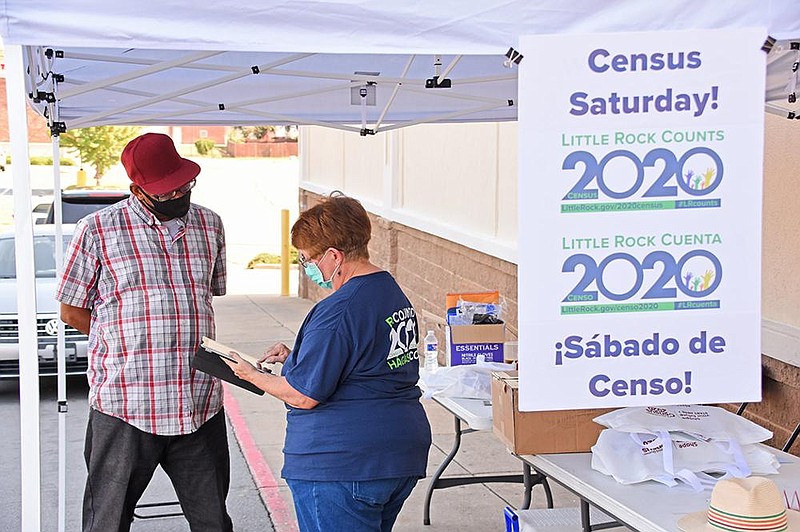 Volunteer Harriett Philips assists David Golden of Little Rock with filling out the 2020 census form during the Census Saturday event at Edwards Food Giant on Main Street in Little Rock. The City of Little Rock will be holding two more Census Saturdays from 9 a.m. to 12 p.m. on Aug. 22 and Aug. 29. Locations for the Aug. 22 mobile hot spot will be Edwards Food Giant at 7525 Baseline Rd. and 20383 Arch St., Kroger at 8824 Geyer Springs Rd. and La Regional Panderia at 7414 Baseline Rd. Locations for the Aug. 29 mobile hot spot will be Kroger at 6420 Colonel Glenn Rd. and 1100 E. Roosevelt Rd., Edwards Food Giant at 1701 Main St. and Super Mercado Sin Fronteras at 4918 Baseline Rd. (Arkansas Democrat-Gazette/Staci Vandagriff)

The delay of U.S. census numbers this year is crimping the redrawing of Arkansas legislative district boundaries, which is causing ripple effects for every level of government in the state and even next year's party primaries.

Back up: When was U.S. census data supposed to come out and why is it delayed?

Census data was originally set to come out March 31, but now it won’t be released until about Sept. 30, the U.S. Census Bureau announced earlier this month.

The Census Bureau said it needs the extra time to process the data because the pandemic caused problems that skewed results (for example, colleges shuttered campuses in the spring and the bureau found it difficult to hire door-to-door canvassers).

Other factors not mentioned by the Census Bureau but reported in news accounts include:

• The census budget was not increased from the previous one for the first time in U.S. history

• The census director resigned in January

What is census data used for?

Districts for the Arkansas General Assembly’s two chambers, the Senate and the House of Representatives, are redrawn after each U.S. census, which happen every 10 years, as is required under the Constitution.

The state district maps in question in turn affect everything from city council wards to U.S. Congressional districts.

Why does it matter that the data was delayed?

In the past, the state held hearings, received months of public input and finished its district mapping by October.

However, this year, the process can’t even start until around then, but it must still be done by February 2022, when candidates can start filing for the 2022 primaries.

This means the public input period is expected to be shorter. County election officials will also be crunched as they draw voter precinct lines based on the legislative districts.

Why is public input important?

What Arkansans say in public hearings and in letters and calls to elected officials have often proved decisive in districting, recent history shows.

After the 2010 census, public input and demands by city officials stopped an effort to divide Springdale into several Senate districts, news accounts show. City residents, leaders and legislators rallied around efforts to have one Senate district that covered most of the city.

After the 2000 census, Northwest Arkansas leaders hired legal counsel and warned the board of apportionment that it would face a challenge if the growing region's representation was shorted.

Read more here on how the census will affect the redistricting process from Northwest Arkansas Democrat-Gazette politics editor Doug Thompson.