Pratt & Whitney engine failed in 777 aircraft over Denver by Compiled by Democrat-Gazette Staff From Wire Reports | February 23, 2021 at 2:01 a.m. 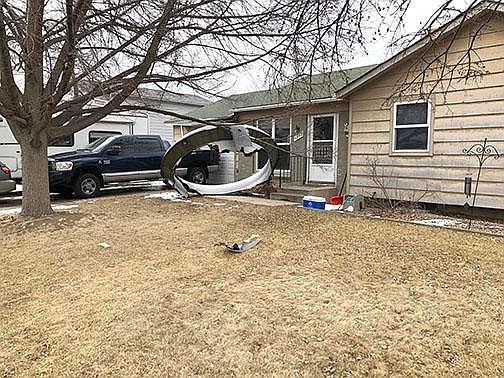 Airlines grounded dozens of older Boeing Co. 777 aircraft after the failure of a Pratt & Whitney engine showered debris onto a Denver suburb and prompted U.S. regulators to order emergency inspections.

United Airlines Holding Inc. halted operations of 24 of its planes in the wake of the incident involving one of its fleet over the weekend, after the U.S. Federal Aviation Administration ordered fan-blade checks on PW4077 engines. Japan's transport ministry grounded planes with the engine variant Monday, as did Korean Air Lines Co. and Asiana Airlines Inc.

The incident on United Airlines Flight 328 from Denver to Honolulu took place shortly after it took off Saturday with 231 passengers and 10 crew members on board. The Boeing 777 landed safely back at Denver, nor was anyone injured by the falling debris. Footage of the burning engine was filmed by a passenger, while people on the ground captured scenes of the plane overhead and scattered aircraft parts near houses.

The scare comes at a sensitive time for the global aviation industry, which is trying to emerge from a year of crisis caused by the coronavirus pandemic's impact on travel. For Pratt, the United incident came on the same day as an emergency in the Netherlands on a 747 cargo jet using the same family of engines. Boeing is only just dusting itself off from the nearly two-year grounding of its best-selling 737 Max jet following fatal crashes in Ethiopia and Indonesia.

Two fan blades were fractured on the United flight, the U.S. National Transportation Safety Board said. Most of the destruction was contained to the engine and the plane suffered only minor damage.

The board said the cockpit voice recorder and flight data recorder were sent to its lab in Washington so the data can be analyzed. Board investigations can take a year or longer, although in major cases the agency generally releases some investigative material midway through the process.

While the Denver event doesn't suggest broader problems with the 777, a twin-engine wide-body plane typically used on intercontinental routes, it adds another urgent issue to Boeing's to-do list just after the 737 Max was cleared to fly again in markets including the U.S. and Europe. The company also halted deliveries of its 787 Dreamliners to check for manufacturing flaws.

"We recommended suspending operations of the 69 in-service and 59 in-storage 777s powered by Pratt & Whitney 4000-112 engines until the FAA identifies the appropriate inspection protocol," Boeing said, adding that it supports decisions by the FAA and Japan's Civil Aviation Bureau to temporarily ground aircraft powered by the engines.

The European Union Aviation Safety Agency said Monday it was in touch with the FAA about the Denver incident and an uncontained engine failure in the Netherlands on Saturday. On the Dutch flight, a 747 cargo plane had to make an emergency landing shortly after takeoff from Maastricht.

The plane scattered parts over the Dutch town of Meerssen, injuring two people and damaging property. One widely circulated photo of the destruction shows what appears to be a part of an engine blade wedged in the roof of a car like a knife stuck in a block of butter.

The plane made an emergency landing at Liege Airport in Belgium.

Japan's Ministry of Land, Infrastructure, Transport and Tourism said an engine in the PW4000 family suffered trouble on a Japan Airlines 777 flying to Tokyo from Naha on Dec. 4. The airline has said the plane had engine trouble after takeoff and returned to Naha. An inspection showed damage to the engine case and missing fan blades, according to the airline. Stricter inspections were ordered in response.

Pratt engines were used on the earliest versions of the 777, with the United example making its debut in 1995.

United had 24 of the 777 models in service; it is the only U.S. airline with the engine in its fleet, according to the FAA. Two Japanese airlines have another 32 that are being pulled, while South Korea's Asiana Airlines grounded nine, seven of which were in service, until Boeing establishes a plan to fix the problems.

The crack that led the fan blade to break on the United flight was similar to one that occurred on a 2018 flight by the carrier, said a person familiar with the preliminary investigation results who wasn't authorized to discuss them.

The blades on this type of PW4000 are hollow and made of titanium. The cracks appear to start from within the surface, making them hard to detect. Airlines can use technologies such as ultrasound to find them beneath the surface. The blades are used only on some 777 planes, said the FAA, which is stepping up the frequency of inspections.

Pratt has dispatched a team to work with investigators and is coordinating with airlines and regulators.

"These recent incidents on the 777 and a 747 do suggest a closer look needs to be taken at the older PW4000 engines and their inspections and maintenance," said Sanjiv Kapoor, a former top executive at SpiceJet Ltd. and Vistara, the Indian affiliate of Singapore Airlines.

Information for this article was contributed by Alan Levin and Julie Johnsson of Bloomberg News (WPNS), by staff members of The Associated Press, and by Katherine Khashimova Long of The Seattle Times (TNS).