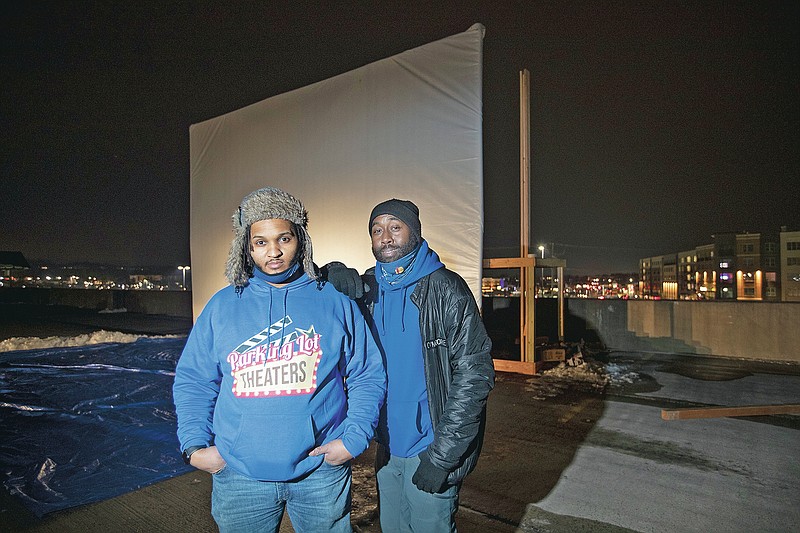 Jason Hunter, left, and Dan Chattin pose in front of a pop-up drive-in theater being set up by Parking Lot Theaters on the upper level of the Exton Square Mall parking garage in Exton, Pa., on Wednesday, Feb. 10, 2021. “When the pandemic kicked off and movie theaters were closing, I was looking to go to a drive-in,” said Jason Hunter, the company’s founder. (Charles Fox/The Philadelphia Inquirer via AP)

EXTON, Pa. -- If you look closely at the impact of covid-19, you'll discover in a number of ways some Americans are reconstructing a gauzy vision of 1950s suburban life.

With so many homebound, family dinners are back. Board games are experiencing a resurgence. And for those fortunate enough to telecommute, some are looking for big homes with big yards.

One more staple from that doo-wop decade has resurfaced, though with a distinctly 21st-century twist. Drive-in movie theaters are popping up at venues throughout the Philadelphia region -- at Citizens Bank Park, the Navy Yard, the Mann Center, King of Prussia Mall and the Delaware Art Museum.

While traditional drive-ins have almost disappeared from the area -- the closest is in Vineland -- these temporary theaters, which tap into both the pop-up business trend and a quarantined populace's desire for safe outdoor activities, are suddenly commonplace.

The newest is to debut this weekend on the top tier of a parking garage behind a shuttered Sears at the Exton Square Mall. There, Parking Lot Theaters, a company founded by a 2006 Temple grad, will stage two nightly movie showings on Friday, Saturday and Sunday.

"When the pandemic kicked off and movie theaters were closing, I was looking to go to a drive-in," said Jason Hunter, the company's founder. "But there weren't really any around. I'd been thinking about doing a pop-up drive-in for a while, and finally, after I started to see that a lot of companies were doing it, I figured why not?"

The return of this peculiarly American tradition comes more than 60 years after the drive-in movie heyday. Started in 1933 when the first opened in Camden, the trend peaked in 1958, when there were more than 4,000 of the mobile theaters across the U.S. Since then the numbers have declined sharply and, by the end of 2019, according to the United Drive-In Theater Owner Association, only 305 remained.

But Hunter and other entrepreneurs sensed an opportunity when the pandemic hit. Traditional theaters had closed. People confined to their homes and cars were eager for entertainment. And the shutdown provided ample space for this new generation of drive-ins in the vast parking lots of idled malls, corporate parks and arenas.

So last fall, Hunter, a Cheltenham native who was working as a graphic designer, contacted the owners of the King of Prussia Mall about setting up a drive-in theater and haunted Halloween village there.

By October, with the mall owner's approval and all the necessary permits from Upper Merion Township, he set up his temporary enterprise in the lot behind the former JCPenney store.

"We called it Parking Lot Horrors, and it went really well," Hunter said. "We had about 100 to 150 cars come through each night."

Customers purchased tickets online, drove through the holiday displays, and then parked to watch a horror film. They could purchase sodas and snacks from an on-site concession stand or, using a mobile-phone app, order hot food from such nearby participating restaurants as Outback, Shake Shack and Yard House.

He planned another event there for Christmas but had to cancel when cases of the virus surged in December. And that's when he began looking toward Exton, whose hard-hit mall had lost two of its four anchor stores and numerous other businesses.

A multi-level garage behind the empty Sears was ideal because it allows for restricted traffic in and out of the site. In the lot at King of Prussia, Hunter said, it was difficult to control access to his event and there were places where motorists could view the movies without paying the admission fee.

"In a parking lot there are too many different ways for people to enter," Hunter said. "I can't control the crowd. Here there's only one way in and out."

Admission at Exton will be $32 a carload, $50 for premium locations in the first few rows. SUVs and trucks will be located away from the sight lines of those in cars. And instead of the first-come-first-served race to the best viewing areas that was a feature of the drive-in experience, Exton attendees can reserve their spots online in advance. The movie audio will be available through the cars' radios through a dedicated FM frequency.

No one is certain how many of these pop-up sites there are at any one time now in the U.S., but one indication of their popularity is the increase in screen rentals in the last year. FunFlicks, a Baltimore-based company that rents large inflatable screens nationwide, says its business has jumped fivefold.

The blow-up screen that Hunter used at King of Prussia proved too susceptible to high wind so he has constructed one out of vinyl for the Exton site. He's also ordered a 23-by-113-foot mobile LED screen that will allow him to take his business to private and corporate events.

Once again, the company will sell popcorn, candy and sodas and deliver it to the cars. Those wanting something more substantial can use the app to get deliveries of burgers, fries, chicken tenders, and more from Buddy's Burgers, located in a nearby shopping center.

There will be two showings a night, at 6 and 9, at least until daylight saving time starts. The movies won't yet be first-run -- though Hunter plans to do that in the near future. The first weekend's fare is to include The War on Grandpa, which has sold out; Blockers; The Time-Traveler's Wife; Tenet; and A Star Is Born.

Hunter hopes to continue at Exton for the foreseeable future, but in the meantime he's looking for a permanent home.

"Dealing with all the different townships and the different requirements they have can take a lot of time," he said. "If I have one place, people can get familiar with it and I can add things like miniature golf and other attractions. But for now, just getting out of the house and seeing a movie is all people need." 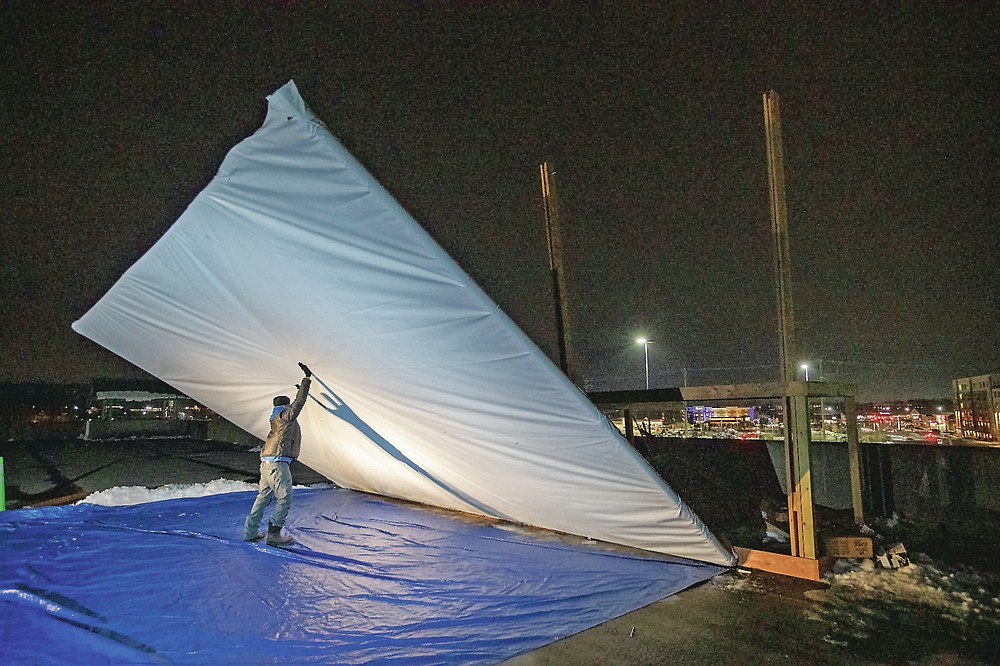 A man works on a pop-up drive-in theater being set up by Parking Lot Theaters on the upper level of the Exton Square Mall parking garage in Exton, Pa., on Wednesday, Feb. 10, 2021. “When the pandemic kicked off and movie theaters were closing, I was looking to go to a drive-in,” said Jason Hunter, the company’s founder. (Charles Fox/The Philadelphia Inquirer via AP)