Search of water lines yet to yield big break 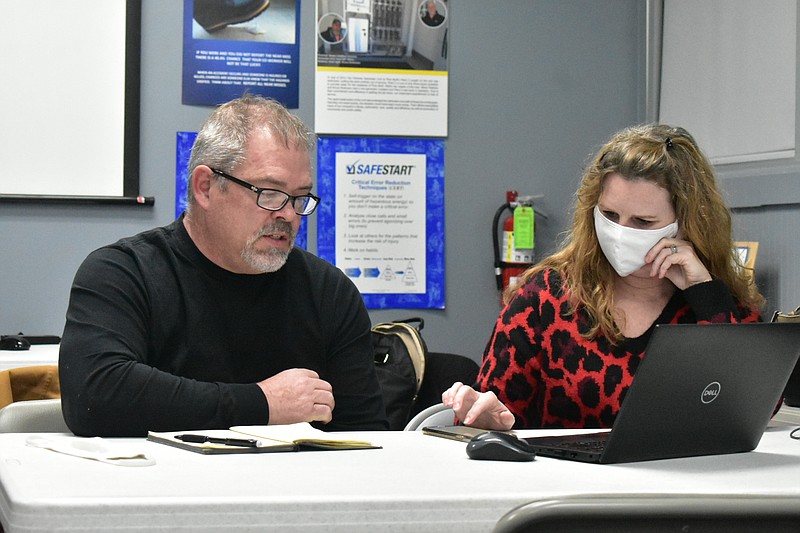 Workers from Liberty Utilities are still searching for a "major" line break that may have compromised Pine Bluff's water system and reduced the water pressure in residences and other establishments across the city, a utility official said Monday.

Mike Beatty, Liberty vice president for water and gas, said during the company's second teleconference in as many nights that a number of 2-inch line breaks have been discovered, but he characterized a major break as one of 8 inches or greater.

"You would think with the amount of water we are producing that would be self-evident, but it has not showed its face at this time," Beatty said. "We continue diligently looking for those leaks."

As of Monday, Liberty had found at least 110 smaller leaks and nine fire protection service leaks in vacant buildings.

Leaks found at the Sunbeam Bakery and the vacant Pine Bluff Commercial building were measured at 6 inches, Beatty said.

"You can imagine what a 6-inch main looks like with 20 pounds of pressure coming out," he added. "Both were significant leaks."

Liberty has increased the amount of water pressure to Jefferson Regional Medical Center, but still not at a rate that Beatty said hospital officials desire. The Liberty water plant on South Myrtle Street, also known as Plant 2, was pumping at a rate of 37.9 pounds per square inch, an increase of 5 psi from Sunday.

Beatty said hospital officials would like at least 50 psi pumped for optimal performance but that he was told 30 psi would help the facility.

"We're working with them, and hopefully they can get more than 30 pounds. They're running about 24," Beatty said.

Workers segregated Plant 2 from the other two as a way to take a load off it and provide more water to the hospital, which had suffered from low pressure and heating problems after last week's snowstorms. Plant 1 is located on Fifth Avenue, and Plant 3 is on Industrial Park Drive.

The Pine Bluff, Dollarway and Watson Chapel school districts announced that classes would remain virtual, in large part citing water pressure issues. Plant 3, which services the White Hall and Dollarway districts, was pumping at 23.6 psi. Plant 1, in the Pine Bluff district, was pumping at 15.2 psi. Beatty said Sunday that the plants average 60 psi across the entire system on a normal basis.

Two refurbished filters were installed at Plant 1 on Monday. Pending bacteria tests from the Arkansas Department of Health, Beatty estimated the plant will be brought online by noon today to help with the water pressure.

Plant 2, although it is pumping to the hospital, is in the Watson Chapel district.

"We're trying to take as much water from here up [from Fifth Avenue north] and let those plants [1 and 3] run that and let this plant [2] serve this [hospital] area," Beatty said, using a city map. "It has worked. We brought the pressure up here [at the hospital]. It has worked, but not enough."

A dialysis center on 28th Avenue has been supplied with two 1,500-gallon tanks, Beatty said. About 8,000 gallons per day have been used.

Liberty has added 14 more crew members from California; four from Arizona who worked through water-pressure issues in Texas last week; and 12 electric utility workers from its plant in Joplin, Mo., to aid in the search for a major break. That brings the personnel count to 50 working on the case.

"It's completely an added community effort at this time," Beatty said.

He received more voices of support during Monday's teleconference, a night after speaking before a room of city leaders and community members dissatisfied over the time it took Liberty to release information about a problem with the water system.

Ken Johnson, general manager of the Pine Bluff Wastewater Utility, expressed his appreciation to Beatty and Liberty crew members for teaming with his employees.

"We want to continue to work with you and the city of Pine Bluff to try to get back to normalcy as soon as possible," Johnson said. "I just want to let everyone know the course of action, now that you are making a very concerted attempt to get this taken care of and in a prompt and expeditious manner. Certainly, we applaud you for the resources you are bringing to town."

Pine Bluff businessman and former Council Member Win Trafford told Beatty: "I think you'll be able to make a difference at a faster rate. There is a community buy-in. We're hoping Liberty will make a future investment to make sure this event doesn't happen again."

Customers are asked to continue conserving water and to report any water-line leaks or breaks by calling (855) 382-6511.