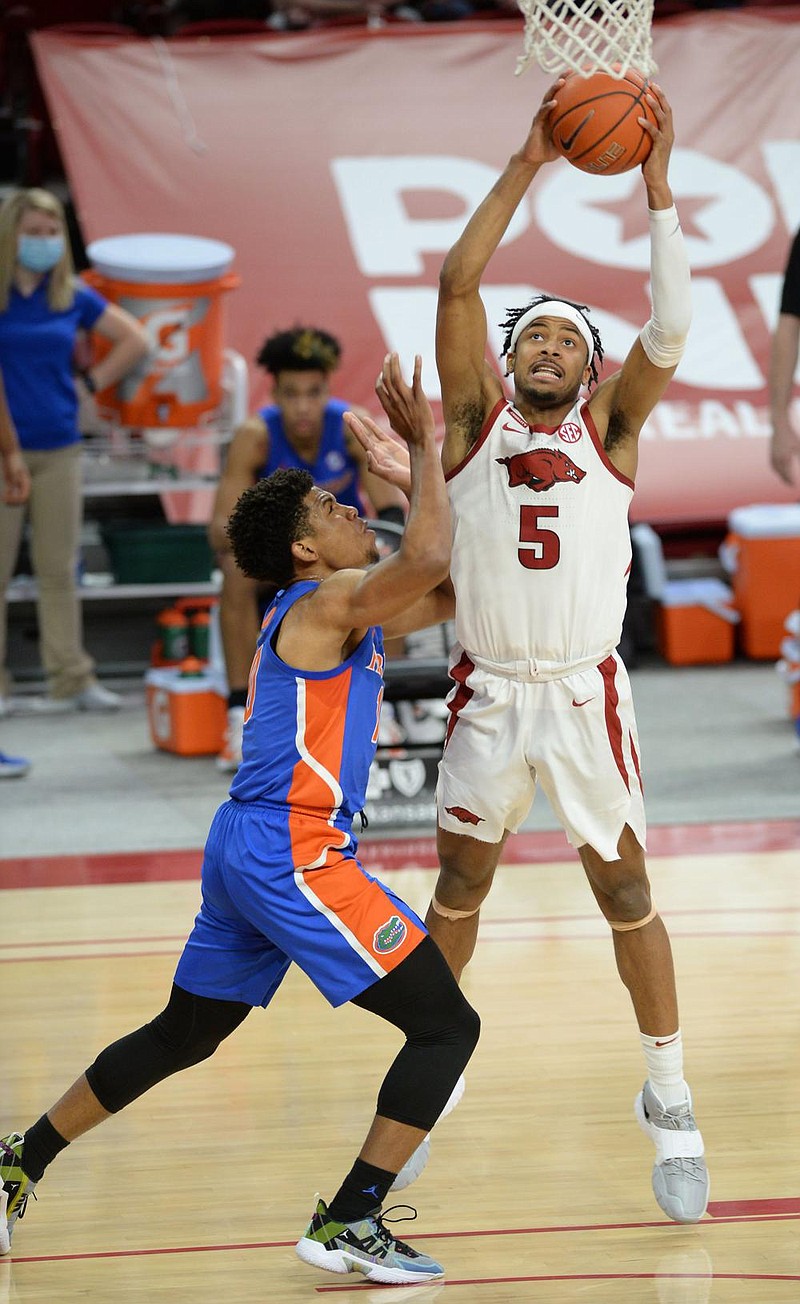 FROM TOP TO BOTTOM

The NCAA instituted in 2018-19 a rating system called the NET Rankings, which took the place of the Ratings Percentage Index. An acronym for NCAA Evaluation Tool, the NET rankings take into account game results, strength of schedule, game location, scoring margin, net offensive and defensive efficiency and the quality of wins and losses.

One more win will clinch a tie for the SEC regular-season title for the Crimson Tide, who were 5-4 in nonconference play. If it comes on Wednesday at Walton Arena against the SEC's hottest team, it would clinch the No. 1 seed in the SEC Tournament for Alabama.

"To be honest with you, if [Arkansas] had played today -- based on the way we played today -- they probably would've looked better than us." -- Alabama Coach Nate Oats after Saturday's 82-78 win over last-place Vanderbilt

"Even when we were playing bad, I still believed in them. They're kids. You keep working with them, but you hold them accountable when they're not doing it right." -- Kentucky Coach John Calipari after a 70-55 win at Tennessee.

"That we were beaten by 15 is a surprise. We were that bad. We got stagnant. We play better when we move it and get going." -- Tennessee Coach Rick Barnes after a 70-55 home loss to Kentucky

The University of Arkansas has made one of the steadiest climbs into the NCAA Tournament bracket of any team in the country the past month.

The Razorbacks, considered on the NCAA Tournament bubble after lopsided road losses at LSU and Alabama on Jan. 13 and 16, were projected Monday as a No. 6 seed by CBSSports.com's Jerry Palm. Arkansas (17-5, 9-4 SEC) has won seven SEC games in a row heading into Wednesday's showdown against SEC leader Alabama.

The Razorbacks have had two postponements against Texas A&M during the course of their longest SEC winning streak in six years, but not playing Saturday's scheduled road game at the Aggies could have a side benefit. Arkansas has an 11-0 record under Coach Eric Musselman when having four or more days to prepare for an opponent.

While that statistical category includes season openers and fall semester games that at times feature a week between games, it also includes a road game at Indiana last year, and SEC wins over Auburn and Kentucky this year.

The Razorbacks are one of six SEC teams in Palm's latest projection. He also includes Alabama as a 2 seed, 4 seeds Missouri and Tennessee, 7 seed Florida and 8 seed LSU.

ESPN.com's Joe Lunardi also had six SEC teams in his latest projection Friday, with 2 seed Alabama, 4 seed Tennessee, 6 seeds Arkansas and Missouri, 7 seed Florida and 8 seed LSU. Lunardi also listed Ole Miss among his "next four out," but that was before the Rebels lost at home 66-56 to Mississippi State on Saturday.

The SEC had four teams in The Associated Press poll again on Monday, with No. 6 Alabama leading the way, followed by No. 20 Arkansas, No. 24 Missouri and No. 25 Tennessee. LSU would be No. 30 based on those also receiving votes.

The Volunteers have been bouncing up and down with a 5-5 record -- including an 80-61 rout of Kansas in the Big 12/SEC Challenge -- since opening conference play at 4-1.

Missouri broke out of a three-game skid with a 93-78 win at South Carolina on Saturday. The Tigers are scheduled to face Ole Miss and Texas A&M at home before closing with a road game at Florida.

Wins by Kentucky and Mississippi State on Saturday gave the conference three two-game series in which a team lost at home only to turn around and beat that opponent on the road.

Kentucky avenged an 82-71 home loss to Tennessee on Feb. 6 with a 70-55 triumph at Thompson-Boling Arena on Saturday.

Mississippi State shocked arch rival Ole Miss with a 66-56 win at The Pavilion in Oxford, Miss., after losing previously to the Rebels at home.

The Egg Bowl series has been bonkers. Ole Miss started the weirdness by winning 64-46 in Starkville, Miss., on Jan. 19 to break a three-game losing streak. Mississippi State entered that game winning three of its last four games, including a 15-point win over Missouri and a 72-69 triumph over Florida.

Heading into the return game in Oxford, Miss., the Bulldogs had lost two in a row, including a 72-51 home loss to last-place Vanderbilt in its previous game. Conversely, Ole Miss had been garnering talk of being an NCAA Tournament bubble team by winning four games in a row before shooting 38.2% in the home loss to the Bulldogs.

Earlier, two of the SEC's most highly regarded teams traded convincing road wins. Tennessee opened the conference season by trouncing No. 12 Missouri 73-53 in Columbia, Mo. The Tigers got revenge when the No. 6 Volunteers were playing some of their best basketball with a 73-64 decision in Knoxville, Tenn., on Jan. 23.

Missouri ripped South Carolina 93-78 on Saturday in Columbia, S.C., to notch a season sweep of the Gamecocks and snap a three-game losing skid, their first consecutive losses on the season.

The Tigers notched their first regular-season sweep in seven years, since the 2014 team beat Arkansas 75-71 in Walton Arena on Jan. 28, then edged the Razorbacks 86-85 at Mizzou Arena on Feb. 13.

There were key items aplenty for Missouri with the win, including Coach Cuonzo Martin's 250th career win.

The Tigers held a player's only meeting prior to the game, as guard Dru Smith said, to get everything out on the table.

Jeremiah Tilmon returned from a two-game absence to score 17 points on perfect shooting: 5 of 5 from the floor and 7 of 7 from the foul line for a guy who entered the game hitting 49% of his free throws.

Missouri shot 57.6% after also torching South Carolina for a season-high 58.3% in its 81-70 victory last month in Columbia, Mo.

LSU joined Alabama and Auburn among SEC teams to have scored 100 or more points in a conference game with its 104-80 rout of Auburn on Saturday.

Alabama leads the way in the SEC with two games of 100-plus points in league play, including a 115-82 drilling of Georgia that marked a school scoring record in conference play. The Crimson Tide also posted a 105-75 win at LSU on Jan. 19.

[Video not showing up above? Click here to watch » https://www.youtube.com/watch?v=00U3dGIqwMs]

Auburn's century mark came in a 109-86 decision at South Carolina.

Arkansas and Tennessee cracked 100 twice in nonconference play, with the Razorbacks scoring an SEC season-high in a 142-62 win over Mississippi Valley State. The Volunteers did it in back-to-back wins over Tennessee Tech (103-49) and Saint Joseph's (102-66).

Texas A&M has the lowest high-point total among SEC teams with its 82-53 win over New Orleans in the season opener. Who the Aggies are tied with in that category is a bit surprising. Kentucky's highest point total of the year is also 82 points, accomplished in three wins: 82-69 over LSU, 82-80 over Auburn and 82-78 at Vanderbilt.

Vanderbilt Coach Jerry Stackhouse was assessed a technical foul early in the second half at Alabama after the upset-minded Commodores had built a 38-34 lead.

The technical came during a 14-3 Alabama run that included a pair of three-point makes by Keon Ellis and Herb Jones, and Alex Reese's thunder dunk. The Crimson Tide woke up after missing 20 of its first 22 three-point tries in the game.

Vanderbilt's Dylan Disu and Kentucky's Isaiah Jackson were named the SEC players of the week Monday by the league office.

Disu, a 6-9, 220-pound sophomore from Pflugerville, Texas, averaged 23.0 points and 15.5 rebounds in games against Kentucky and No. 9 Alabama to be named SEC player of the week. He had career-highs of 29 points, on 10-of-20 shooting, and 16 rebounds against Kentucky.

Jackson, a 6-10, 206-pound forward from Pontiac, Mich., was named SEC freshman of the week after averaging 15.5 points, 8 rebounds and 2 blocks in wins over Vanderbilt and at Tennessee.