Water a struggle for Saline County 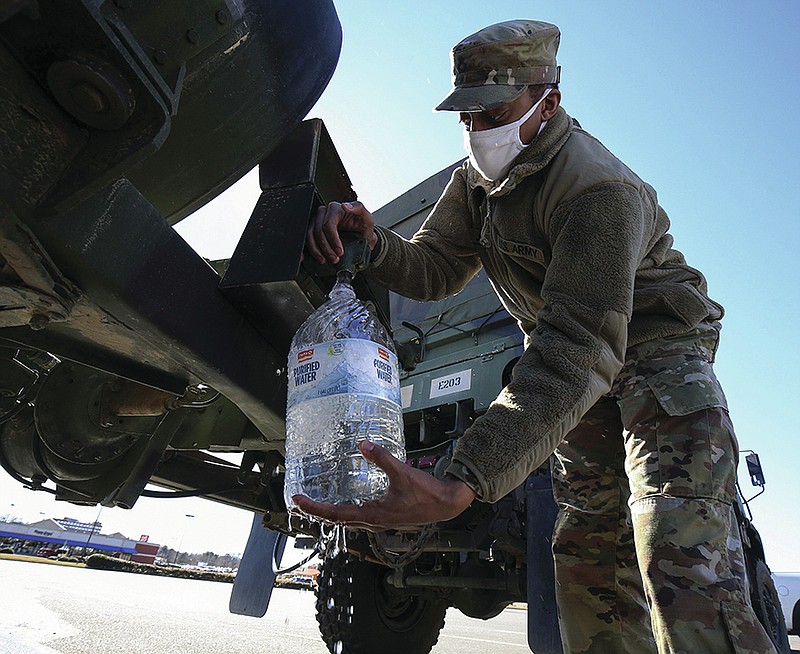 One after another, Saline County residents, burdened with water outages, pulled up to an Army National Guard water tanker Monday and handed off buckets, water jugs and empty tea containers to be filled.

Multiple water utility providers in the county and others across the state are experiencing service failures and boil orders after two winter storms left pipes frozen and then bursting as they thawed.

About 30 percent of Benton was without water Monday and the rest of the 35,000 residents were on a boil order, said David Vondran, Benton Utilities general manager. He said the order should be lifted by Friday evening.

The utilities provider has experienced multiple main ruptures, fire hydrants struck by vehicles and customer leaks in the past week, according to its Facebook page. Other utilities in Saline County experiencing issues include Southwest Water, Salem Water, Haskell Water and Bauxite Water, according to a news release from the county.

The Saline County Office of Emergency Management and the National Guard set up distribution centers Sunday at Benton River Center and Tinseltown Theater. The centers will run from 8 a.m. to 5 p.m. today.

Katie Richmond, 34, of Benton filled up buckets for herself, her parents and her grandparents Monday at the River Center location.

The mother of three has been out of water since a pipe burst in her home on Valentine's Day. She's struggled with water pressure since the pipe's been fixed.

"I have a tub on my deep freezer that I'm washing the essentials that I need in," Richmond said.

The family had half a case of water from Walmart when they lost water, she said.

"I've been rationing it," she added.

Richmond said she received bottles of water from the center on Sunday and came back for more Monday.

The center ran out of bottled water Sunday but was filling containers with two tankers carrying about 1,000 gallons Monday, Sgt. Josh Pippen of the Army National Guard said.

He said by late Monday morning the center had seen about 250 people since it opened Sunday.

"They have been grateful," Pippen said of the residents who received water. "They are very thankful."

Rickey and Kimberly McDoole of Traskwood used sign language to thank to Pippen and electric linemen with Benton Utilities, who helped at the center.

She said they rushed to the center after learning it was open. They plan to use the water for cooking, drinking and their five cats and three dogs, she said.

"We need lots of prayers," McKeon said noting that his crews have battled with road conditions and broken lines in recent days.

About 20 customers at higher elevations were out of service Monday, he said.

McKeon said it is possible the water pressure could be back to normal by the end of the day Monday.

Hot Springs' two treatment plants increased water in the distribution system by 60% over the weekend, but officials encouraged customers Monday to continue to use water sparingly.

"We're not anywhere out of the woods," Hot Springs Utilities Director Monty Ledbetter said. "We still need to be in conservation mode."

"We were able to pump directly to the customers and stay off a boil order," Ledbetter said. "There were a few customers on the high spots who lost water temporarily. They've kind of been off and on because of the elevation at their houses. Those high areas of town may lose water for a little while, but it will come back on."

Washington Water Authority in Northwest Arkansas issued a boil water notice Monday for areas south of Morrow and to Evansville.

"This order was issued for these areas as a precautionary measure because of the possibility that contaminated water may have entered the distribution system as a result of a water storage tank draining below acceptable levels due to increased water demand," the order states.

The loss of water is a result of water system breaks, plumbing leaks and increased demand, according to the order.

Central Arkansas Water continued to ask customers to conserve water Monday, but spokesman Doug Shackelford said there weren't any disruptions to service. He said it is possible the conservation effort could be lifted in coming days.

"Our system is improving and our tanks are filling back up," Shackelford said.

Information for this article was contributed by David Showers of the The Sentinel-Record in Hot Springs.