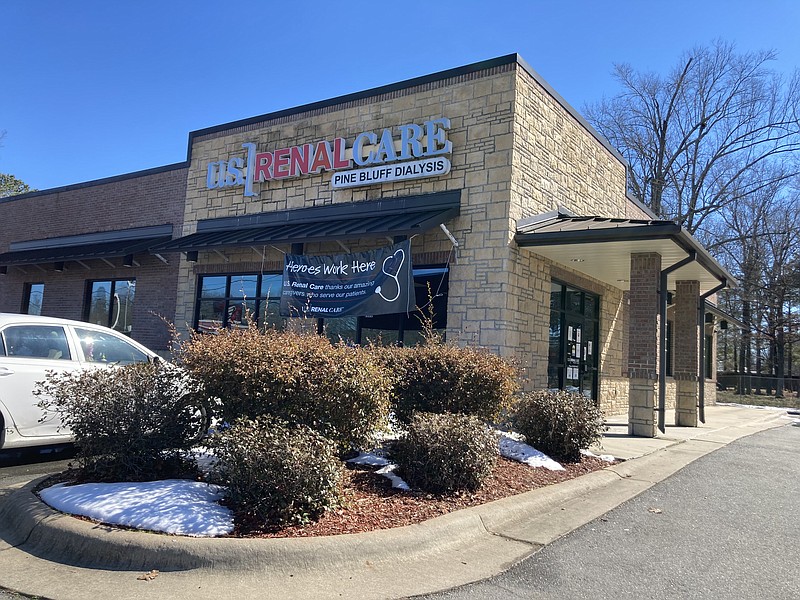 An Arkansas National Guard water tanker that was being used by U.S. Renal Care had to be removed because the facility is a for-profit business. But a social worker said the clinic got help from the Pine Bluff Fire Department on Monday morning and was back in operation by 11 a.m. (Pine Bluff Commercial/Byron Tate)

The Arkansas National Guard had to move its water tanker from a for-profit dialysis center because to leave it there would have been against federal law, a guard spokesman said Monday.

The guard's tanker was being used by U.S. Renal Care on 28th Avenue because the facility had been unable to operate its dialysis machines due to the low water pressure the city has been experiencing since last Thursday. A manager told the Pine Bluff Commercial on Sunday that he was upset with the guard's move because it would threaten life-saving medical care for the more than 100 people the company serves.

But Lt. Col. Brian Mason, a spokesman for the Arkansas National Guard, said that, while he was sympathetic to what was happening in Pine Bluff, federal law barred the use of the tanker by a business.

"We are legally prohibited from supporting a for-profit business," he said. "To do otherwise would constitute an improper use of our equipment."

Initially, the tanker was being used in the area in a proper manner, he said.

Mason offered a timeline of what happened with the tanker. He said a call came in over the weekend from the Jefferson County Emergency Management office to the Arkansas Division of Emergency Management that water was needed at the University of Arkansas at Pine Bluff. The water tanker was taken there on Saturday and put to use in supplying water to a boiler system used to heat buildings.

On Sunday, however, the tanker was supposed to be moved to Jefferson Regional Medical Center. Mason said such "asset reallocations" of equipment happen often during a natural disaster and in most cases, that movement does not present a problem.

Mason said, however, that because the hospital had already lined up water tankers for its own boiler system use, the guard's tanker was taken to the renal center.

"When we realized it was being used at the renal center, which is a for-profit business, we didn't just move it right then," Mason said. "What we did do was we offered that water to the entire community."

Later in the day on Sunday, however, the guard moved the tanker, he said.

Mason said what might have helped the situation was for the guard's tanker to have been left at the hospital, which is nonprofit, and for the tanker already at the hospital to be moved to the renal center. "But that didn't happen," he said.

Mayor Shirley Washington said on Sunday that renal care patients had been unable to get dialysis for several days and that two people had gone into cardiac arrest because of the delays.

Eric Foster, the manager at U.S. Renal Care, said his office sees more than 100 kidney patients and that he wasn't surprised to hear that some of them had gone into cardiac arrest, adding that without dialysis, people with failing kidneys retain fluid and the additional fluid puts a strain on their hearts.

Foster said he had served in the military and was "not happy with my Army" for moving the tanker, adding that if it was a matter of money, the business and the National Guard could settle up later.

Mason, however, said that money was not the issue and that even if the guard was reimbursed, the fact remained that the federal equipment could not be used to support a for-profit enterprise.

Mason reiterated that he understood the gravity of the situation and the position the dialysis clinic was in, adding that he planned on calling Foster and discussing the matter with him.

Mason said the request for assistance was "the sticking point," for the legal requirements and statutes.

"The issue came in when the tanker was not being utilized in line with the initial request," he said. "There are many people here trying to do great things to help the people of Arkansas in these times of need. Our state and local partners with ADEM, the County Judges and OEMs, enjoy great working relationships."

The city's water system, operated by Liberty Utilities, has had a critical shortage of pressure. The utility has blamed the cold weather on burst lines and leaky pipes as the problem and has asked the public for help in identifying those areas so they can be fixed.

Contacted on Monday, a U.S. Renal Care employee said the facility was back in business.

"Yes, we got water from the Pine Bluff Fire Department," said Eric Hudson, a social worker at the clinic, "and we started back up today. We got the water this morning and were able to start at 11 a.m."