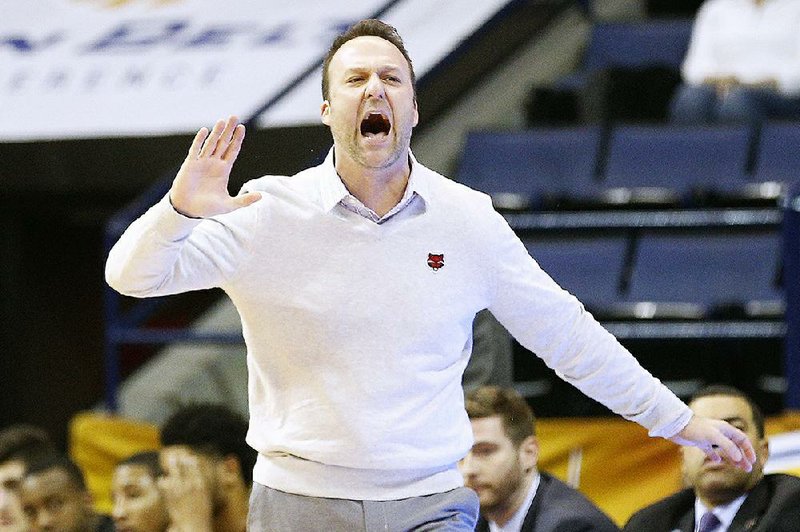 JONESBORO -- For the first time in 305 games, the Arkansas State University men's basketball team did not make a three-pointer.

The Red Wolves -- who entered Monday's game against West Division-leading Texas State atop the Sun Belt in three-point shooting at 39.3% from deep -- went 0 of 13 and fell to the Bobcats 57-52 at First National Bank Arena.

"We had an off-shooting night," senior Marquis Eaton said. "They hit five and we hit none. That's a big difference."

The Red Wolves led by as many as eight points after halftime, but they missed each of their last five field goal attempts and were outscored 7-2 by Texas State (16-5, 10-3) in the final 3:27.

Freshman Norchad Omier paced the Red Wolves with 16 points and recorded his 12th double-double with 14 rebounds. Eaton scored 13, the only other ASU player in double figures as the Red Wolves shot 36.8% from the field, their third-lowest mark of the conference season.

Bobcats interim head coach Terrence Johnson did not travel to Jonesboro due to covid-19 protocols. Led by assistant Bennie Seltzer, Texas State overcame a 2 of 12 start from the field with a 50% shooting performance in the second half . Junior Mason Harrell scored a game-high 17 points and recorded four assists.

"[Harrell] should be player of the year," ASU Coach Mike Balado said. "I'm sorry. I don't know what other player has done more for his team than that young man has done. I'm voting for him. I'll tell you that right now. He's 5-9, and that kid has a bigger heart than a lot of guys that I've played against."

"There's no panic button," Balado said. "There really isn't. Our offense, I thought, flowed well. We just stay the course and continue to do what we do."

Neither team shot above 40% in the first half. Texas State junior Alonzo Sule scored on his team's second possession before the Bobcats missed 10 of their next 11 shots.

The Red Wolves weren't much better, shooting 39.3% in the opening half, but outrebounded Texas State 21-14 and scored 8 second-chance points. Omier scored 10 and grabbed six boards in the half, and his putback followed by Willis' jumper with 33 seconds remaining sent ASU to the half ahead 25-21.

"We just have to capitalize on the little stuff," Eaton said. "We had them up eight and then they cut it down to four. [In those moments], we have to keep going."

The Red Wolves trailed 50-47 with under four minutes when Omier swiped the ball from Texas State junior Caleb Asberry and completed a three-point play to tie the game at 50-50. It was ASU's last field goal of the game.

The defeat took the Red Wolves out of contention for the West Division title. ASU enters the final weekend of the regular one and a half games behind Louisiana-Lafayette for second place in the division, a spot that would earn a first-round bye in the conference tournament.

"We're still in the hunt," Balado said. "We win out, we have a chance to get a bye. As much as we'd like to win the West Division, [Texas State] played better than we did tonight, so give them credit."