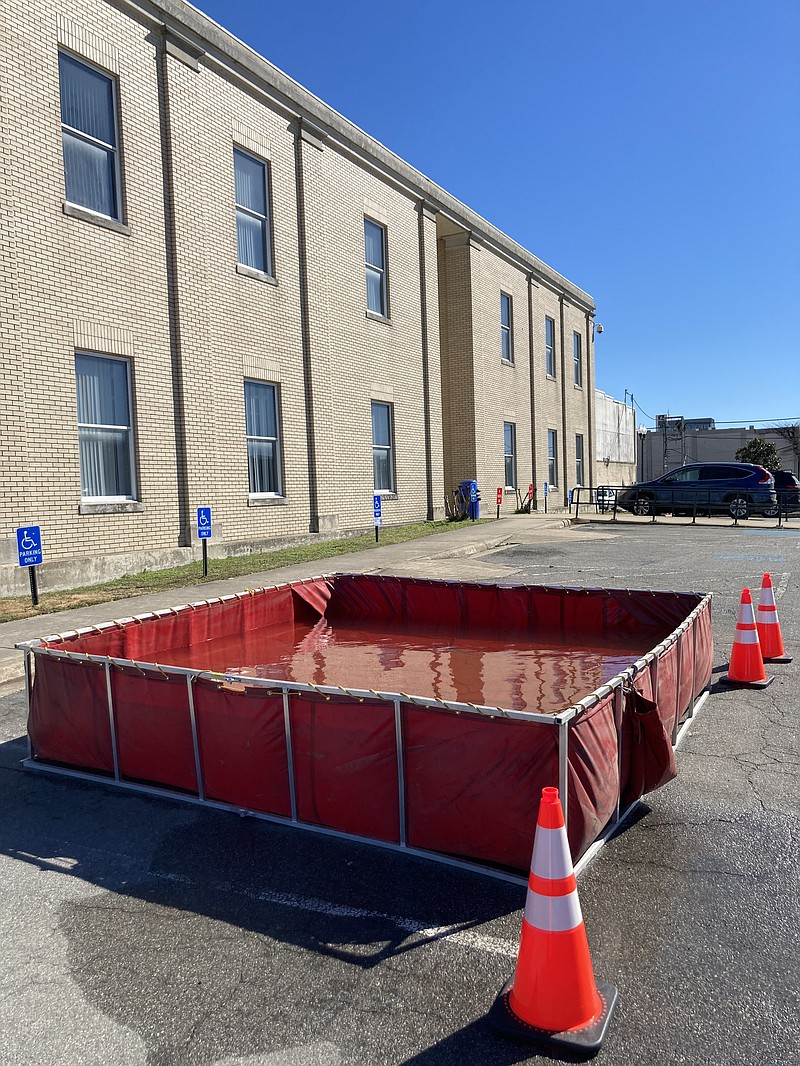 A temporary water trough has been placed in the parking lot of the Jefferson County Courthouse. The water is used to flush toilets in the building because the water pressure is too low. "Every office has a bucket," one worker said. (Pine Bluff Commercial/Byron Tate)

County offices are having to adjust as the reduced water pressure continues to be an issue in Pine Bluff. After county offices were closed last week due to the winter storm, Jefferson County Judge Gerald Robinson made the call for his employees to come back to work, despite the water issues.

"I made the call simply because I know that we were off a week and many of the offices may be behind on some of the things that they need to do," said Robinson. "We still got to provide to the public."

To accommodate the county employees, Robinson has altered their work schedules to 9 a.m. to 4 p.m. He has also provided 5-gallon buckets that can be filled with water from a temporary water trough constructed on the west side of the courthouse.

"I know this may not be the best route, but this is all we have at the moment," said Robinson, who added that if the water pressure doesn't improve in the next couple of days, he will reassess the work schedule due to the conditions. "I understand not having this water pressure is unsanitary and causes a problem not only for the employees but causes a problem for the public if they come in."

Robinson, as well as the County Road Department, have purchased "water buffalo" tanks to transfer up to 500 gallons of water to be placed at the Juvenile Justice System, the jail, and the courthouse.

Robinson is also part of a task force, along with the Office of Emergency Management, the mayor's office, the sheriff's office and other county entities that meet twice a day with Liberty Utilities to gather information to share with the public.

"I don't want you in the dark. We are trying to be as transparent as possible," said Robinson. "I want you to know what we are facing."

The first meeting was held on Sunday.

During that meeting, Liberty Utilities had not found the issue although it was known that millions of gallons of water were being lost through unlocated major leaks.

The company has been able to maintain positive pressure, avoiding a boil order advisory event, but the main focus is for Plant 2 to get more pressure to Jefferson County Regional Medical Center.

"This situation is dire and we don't know when it will be corrected," said Robinson. "Right now JRMC is diverting patients to other area hospitals because they can no longer put a person on the floor because they don't have enough water pressure for them to have the basic needs for them to use the bathroom and things of that nature."

Robinson also stated that officials learned Liberty Utilities had some weaknesses in its system that were reported months ago that it failed to fix.

The process for maintenance on filters began several weeks ago.

"We are deeply sorry that our customers continue to experience significantly reduced water pressure, and we recognize that this is a true hardship for the entire community," said Mike Beatty, a Liberty vice president. "Our top priority is restoring full service to our customers as quickly as possible, which is why we have crews working around the clock to identify waterline breaks. We are also working to bring additional personnel in to aid in the effort. Fortunately, at this time, a water boil advisory is still not required."

On Monday, Liberty Utilities reported their crews worked on three additional water leaks and breaks. Two were reported by customers, and Liberty crews identified one, but none were major.

The total number of leaks as of Monday involved 110 residences where meters were shut off to stop the flow of water to begin the repair.

Reports show that 24 Liberty operations team members are on-site and working in the community. Additional Liberty crew members are on their way -- 14 are coming from California, four from Arizona and 12 from the company's electric utility.

Liberty is urging everyone to continue to conserve water and report any waterline leaks or breaks by calling (855) 382-6511.

It also created an online update website to keep the community informed at https://arkansas.libertyutilities.com/pine-bluff/residential/urgent-update.html.

"Liberty Utilities has failed in their upgrading of the infrastructure. They knew that parts of it were old but essentially this bad weather and extreme temperatures have exposed the weaknesses that they had," said Robinson. "This is an issue that we have with Liberty Utilities and they're working trying to fix that problem."

Liberty officials have said the company should not be held responsible for the failure in the water system and instead have blamed the bitter cold weather for the leaks and line breaks, as well as residents who left their faucets dripping to avoid burst pipes.