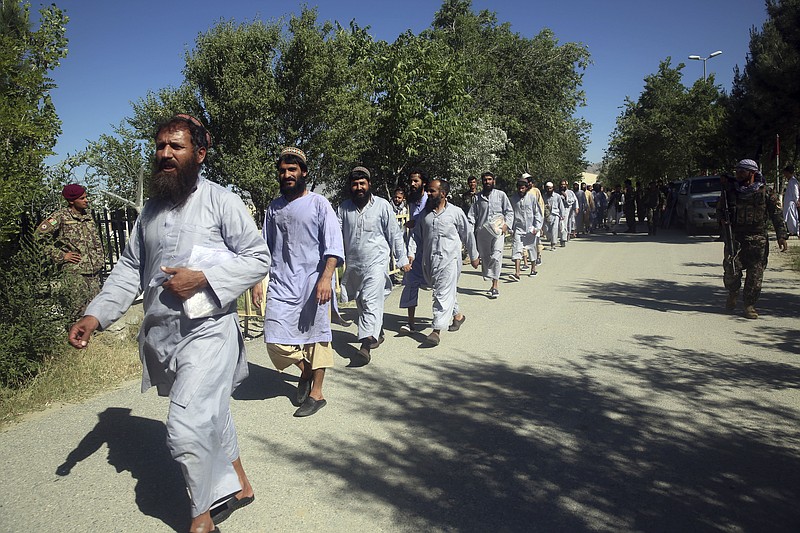 FILE - In this May 26, 2020, file photo, prisoners are released from Bagram Prison in Parwan province, Afghanistan. After more than a month of delays, escalating violence and a flurry of diplomatic activity peace talks between the Taliban and the Afghan government have resumed Monday, Feb. 22, 2021, in the Middle Eastern State of Qatar. (AP Photo/ Rahmat Gul, File)

ISLAMABAD -- With violence spiking, Afghanistan's warring sides have returned to the negotiation table, ending more than a month of delays over hopes that the two sides can agree on a reduction of violence -- and eventually, an outright cease-fire.

Taliban spokesman Mohammad Naeem tweeted Monday night that talks had resumed in the Middle Eastern state of Qatar, where the insurgent movement maintains a political office. There were no details other than the atmosphere was "cordial," a commitment that negotiations should continue and an announcement that the first item of business will be setting the agenda.

When talks ended abruptly in January, both sides submitted their wish lists for agendas. The task now is for the two sides to sift the respective wish lists, agree on items to negotiate and the order in which they will be tackled.

The priority for the Afghan government, Washington and NATO is a serious reduction in violence leading to a cease-fire. The Taliban have said it is negotiable, but until now have resisted any immediate cease-fire.

Washington is reviewing the February 2020 peace deal that former President Donald Trump's administration signed with the Taliban that calls for the final withdrawal of international forces by May 1. The Taliban have resisted suggestions of even a brief extension, but a consensus is mounting in Washington for a delay in the withdrawal deadline.

Neither Washington nor NATO has announced a decision on the fate of an estimated 10,000 troops, including 2,500 American soldiers, still in Afghanistan. The Biden administration has emphasized a political solution to the protracted Afghan conflict, retained Zalmay Khalilzad, the man who negotiated the U.S. peace deal with the Taliban and until now avoided any definitive statements about the road forward.

Meanwhile, civilian casualties rose sharply in Afghanistan after peace negotiations began in September, even as overall deaths and injuries dropped during 2020 compared with the previous year, the United Nations reported Tuesday.

In its annual report documenting civilian injuries and deaths, the United Nations' mission in Afghanistan found that the escalation in civilian casualties began shortly after intra-Afghan negotiations opened on Sept. 12 in Doha, Qatar, increasing by 45% in the final quarter of 2020 versus the same time period in 2019.

"2020 could have been the year of peace in Afghanistan," said Deborah Lyons, the special representative of the U.N. secretary-general for Afghanistan. "Instead, thousands of Afghan civilians perished due to the conflict."

The decline was attributed to a reduction by the Taliban of mass casualty attacks in major cities and a decline in the number of U.S. airstrikes.

But civilian casualties surged in the fourth quarter as fighting raged in the countryside between the Taliban and Afghan government forces. At the same time, a targeted assassination campaign of shootings and bombings killed government workers and security force members, journalists, civil society advocates and family members of combatants.

Also targeted were religious minorities, especially Hazaras, most of whom are Shiite Muslim, and the country's small Sikh population.

The Taliban have denied targeted attacks against anyone other than government employees or supporters, but the Afghan government has blamed the militants for most such attacks.

Information for this article was contributed by Kathy Gannon and Tameem Akhgar of The Associated Press; and by David Zucchino of The New York Times. 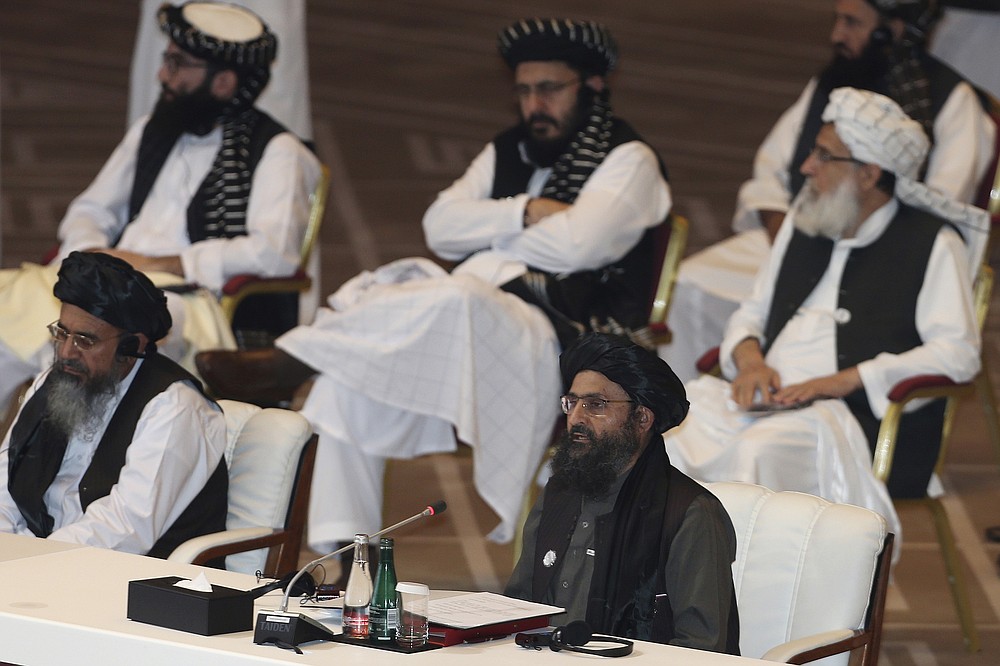 FILE - In this Sept. 12, 2020, file photo, Taliban co-founder Mullah Abdul Ghani Baradar, bottom right, speaks at the opening session of peace talks between the Afghan government and the Taliban in Doha, Qatar. After more than a month of delays, escalating violence and a flurry of diplomatic activity peace talks between the Taliban and the Afghan government have resumed Monday, Feb. 22, 2021, in the Middle Eastern State of Qatar. (AP Photo/Hussein Sayed, File)
ADVERTISEMENT