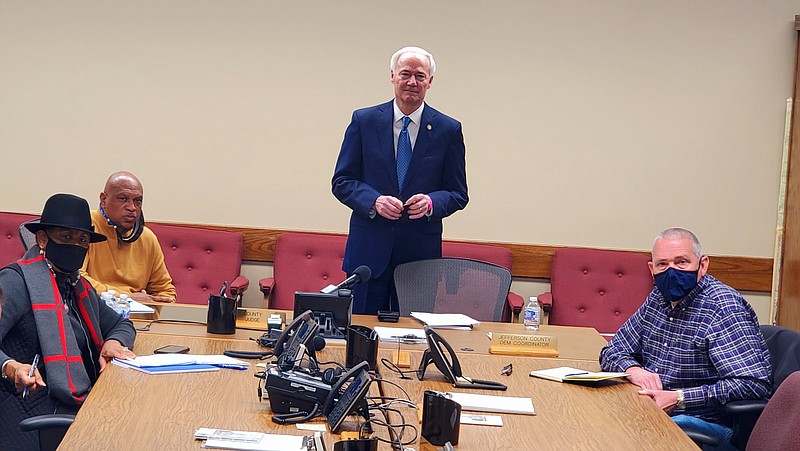 Arkansas Gov. Asa Hutchinson came to Pine Bluff on Tuesday to meet with city and county leaders and other officials to discuss the "catastrophic" water pressure problems caused by last week's winter storm.

"We want to look at what resources are needed here," said Hutchinson, who added that the state had provided portable water tanks to help the city get through the water shortage. "Until we get the pipes fixed and identify the entire problem, it's not going to get back to normal."

[Video not showing up above? Click here to watch » https://www.youtube.com/watch?v=y20RWUpwaKA]

Hutchinson said he wanted to identify anything the state could help with so businesses could get back on-line and Pine Bluff residents' water pressure could be restored.

Since Thursday, the city has experienced a drastic reduction in water pressure. Liberty Utilities has said the problem stems from the cold weather, which caused pipes to leak and burst.

Hutchinson heard from each leader in the room as part of his statewide assessment to see if Arkansas will qualify for a major federal disaster declaration request.

"We are in a catastrophic situation, and I would say it means a lot to the judge and myself that you are here this morning," Washington told the governor. "That lets us know you have a pulse on what's going on in Pine Bluff."

Robinson said that since city leaders started having meetings to collaborate and come up with solutions, he has seen some progress.

"Water pressure is beginning to go up," he said. "We have identified several locations where those leaks are. We have also collectively come up with other ways to fix things."

According to Robinson, the group prioritized water needs beginning with the hospital, nursing homes and UAPB.

Alexander said the university had more than 100 residential students spread out between Little Rock, White Hall and Pine Bluff hotels because living conditions on campus do not allow for enough water pressure to even flush the toilets.

"My hope is that they wouldn't have to be in a hotel more than a week because I think it can wear on the students anything beyond that," said Alexander, who said he wants the water pressure issue fixed as soon as possible. "The other alternative is to release them and send them home, which is a real downer because they went home last spring around the same time."

Hutchinson's concern is that the students will leave and not return, and Washington agreed, referring to a conversation she had with her granddaughter who is a UAPB student.

"She talks to many of her friends and some of them are considering dropping out if they have to go back home," Washington said. "That's the last thing we want to do. We most definitely want to bring this to an end as soon as possible."

Alexander said in the meantime the students are continuing their virtual learning, which was implemented because of the coronavirus pandemic. He also mentioned that UAPB's dining services workers were taking three meals a day to the far-flung students.

"We've gotten accustomed to the remote environment, but it's put quite a strain on us because I believe the university is probably in the most vulnerable position," said Alexander.

According to Alexander, the water plant near UAPB has a major break, which presents a serious obstacle to restoring water pressure to campus.

While UAPB is seeing no change in its water crisis, there is some hope for Jefferson Regional Medical Center, which had been diverting patients to other hospitals because of the low water pressure. On Tuesday, hospital officials said the pressure had risen sufficiently to allow the hospital to resume most activities, including surgeries.

According to Thomas, the operating cost is approximately "a half-million dollars," and each day that the hospital cannot render full services is a drain the hospital will not be able to recoup.

According to Thomas, the hospital's water pressure is about halfway to the level needed for full operation.

"Due to the fact that our water pressure is inadequate to supply water to upstairs to our floors where our patients are to have running water for showers and toiletries, we are simply just not in a state where we can admit those patients at this time," said Thomas.

Later in the day, the water pressure had risen at the hospital from 24 pounds per square inch (psi) to 42 psi.

Patients were being transferred to Dumas and Monticello hospitals, while the emergency room remained open.

"We have got plans in place to get portable water tanks to help feed water into the hospital's intake," said Thomas. "That may actually help get us back in business sooner than later, depending on how long the crisis may continue."

"I told them to do virtual today," said Washington, explaining that she had spoken to Watson Chapel School District Superintendent Jerry Guess.

Washington said she has received numerous complaints from people who have low water pressure or none at all.

"Some residents are having to go to other areas just to shower," she said.

Hutchinson recalled his conversation with Liberty Utilities officials, stating that it was not known when the company would be able to find the main leakages.

According to Liberty officials, the utility, which provides water to all of Pine Bluff and some areas outside the city, are pulling in help from several areas to help locate underground leaks. In all, 50 workers will be working on the problem.

Liberty Utilities has also been working alongside Pine Bluff Wastewater Utility to look for leaks and repair them.

After finding major leaks at the vacant Pine Bluff Commercial building and the Sunbeam Plant, Liberty Utilities officials said they are going through vacant buildings in search of other big leaks.

"Those were both 6-inch mains that were fully broken," Liberty Utilities officials said. "Once we shut those off, we did see the pressure come off on the system."

Officials say more than 120 leaks have been identified. They are using drone technology, as well as fluoride tracing to identify additional leaks.

"I do like the fact that we have been coming together for the last few days," said Washington. "We are working on getting some things in place, but it's still not happening fast enough. We are in a catastrophic situation."

Foster has been lending support to various entities in need in Pine Bluff, especially to the Jefferson County sheriff's office by supplying water.

"That's what is wonderful about Jefferson County -- when they pull your resources together all across the county," said Hutchinson.

Washington said the city is thankful for the support, adding that she wants to continue to make sure everyone is working together to solve the problems as efficiently as possible.

"From the flood to this winter storm, we seem to be setting records," said Hutchinson, who told Robinson to let him know if there are human resources that are needed. "We got to get this fixed as quickly as we can because we don't want human resources to stand in the way." 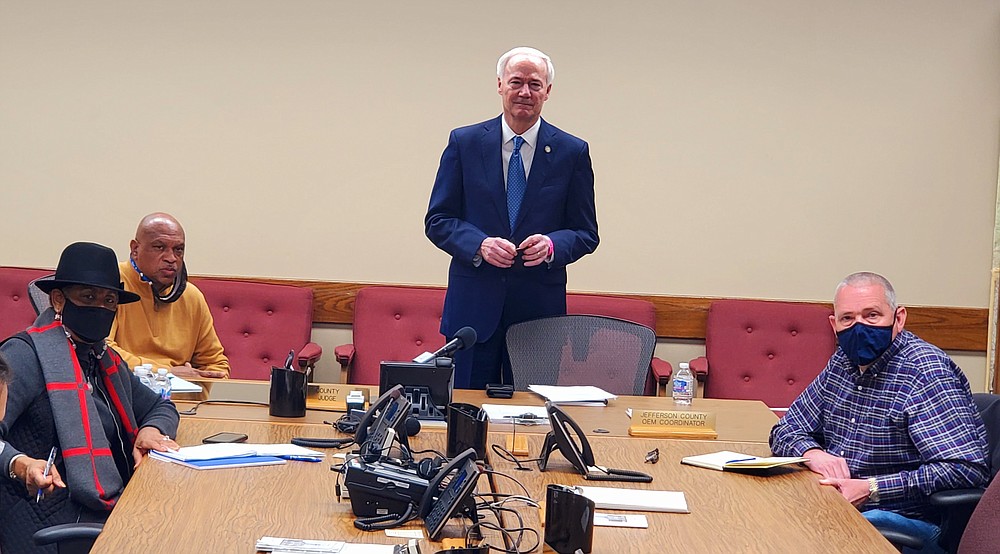