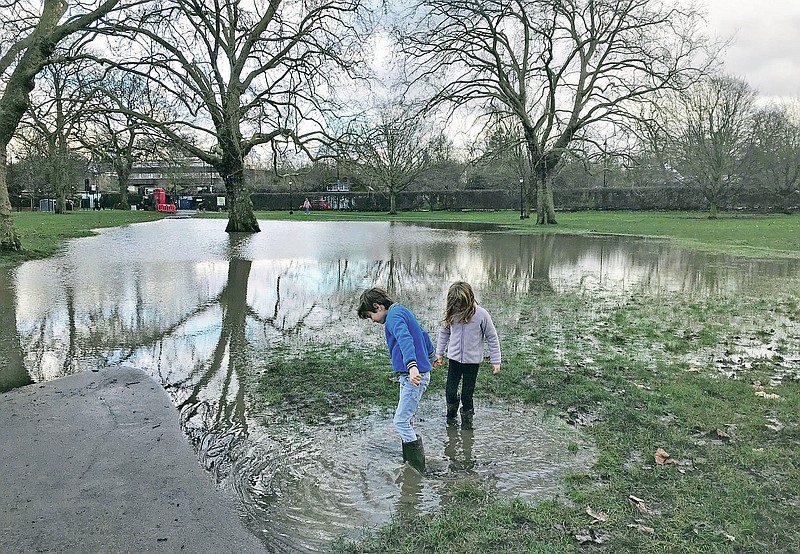 LONDON -- It's apparently not enough for Britons to endure almost 120,000 covid-19 deaths and face a new variant of the virus scientists say is more contagious and more deadly.

Not enough to struggle through a third lockdown in less than a year, a shutdown now in its ninth week in London with no end in sight.

No, all of this has to come smack in the middle of Britain's mud season, the time formally known as winter.

While everyone in the U.K. is already lacking Vitamin D, the sun chooses to take a months-long work stoppage and named winter storms kept sweeping eastward across the Atlantic. Storm Bella marched in right after Christmas, bringing gusts up to 106 mph and rain dumping 3.2 inches on a village in Scotland.

A sodden, freezing version of a hurricane. Storm Darcy roared in last week from the opposite side, bringing an icy Arctic blast and the U.K.'s coldest temperature in 25 years.

British meteorologists have as many ways to describe rain as the Inuit do snow, since the daily forecast is just an estimate of how much rain will hit when and with what force. Even my husband, who grew up in sun-soaked Southern California, realizes one just runs or walks or shops in the rain here; it's impossible to dodge it.

Unlike the southeastern U.S., which floods during the summer-fall hurricane season, Britain floods in the dead of winter, bringing hypothermia alongside germ-laden waters. Rivers across England and Scotland are bursting: 73 flood alerts were in effect on Friday alone. And this year, few gyms or schools are available for emergency housing for fear they will turn into covid-19 factories.

It's a Dickensian time.

The lockdown in London began Dec. 20, literally the day before the darkest day of the year. Forget about fun: bars, nightclubs, museums, gyms, theaters and cinemas are closed, except for a few restaurant takeouts. Even outdoor venues such as London's Hampstead Heath bathing ponds, a bracing 55 degrees Fahrenheit when I last took a dip in October, are shut.

You're allowed out once a day for exercise, more for food shopping. Even British Prime Minister Boris Johnson had to defend himself over a cycling trip to a park 7 miles away, though it was deemed not to have violated lockdown rules.

So the only thing left for most to do is walk or run.

And having millions trudging in the cold winter rain has done exactly what one would expect: create acres and acres of squishy mud.

Farmers across the country are upset over trekkers who, in their efforts to avoid sodden right-of-way paths, trample around them. Only they are not marching over grass but corn, barley and wheat crops, creating mud highways 25 feet wide.

Dogs in the parks have black mud-line streaks across their bellies. Knee-high wellies -- plastic-molded boots that are often caked with mud -- are worn by everyone from toddlers to grannies with hiking poles.

While protected against the weather, too many in London's parks still forget the key pandemic-era weapon: a mask. In an hour-long trek across Regent's Park, Primrose Hill Park or Hampstead Heath you can pass hundreds of maskless people and outsized social "bubbles."

It takes all the composure I can muster not to lecture every one of them.

My husband and I now avoid the grand parks on the weekends, but walking on uneven cobblestones and pavement in London's grittier areas brings sore joints and foot ailments. It's a minor price to pay, however, compared with the waves of grief wrought by the virus on families and medical workers.

Years from now, when my grandchildren ask, "What did you do during the pandemic, Mimi?"

I will tell them: I spent 10 hours a day hip-deep in emotionally wrenching pandemic news. The rest of the time I was out in the mud, trying to stay safe.