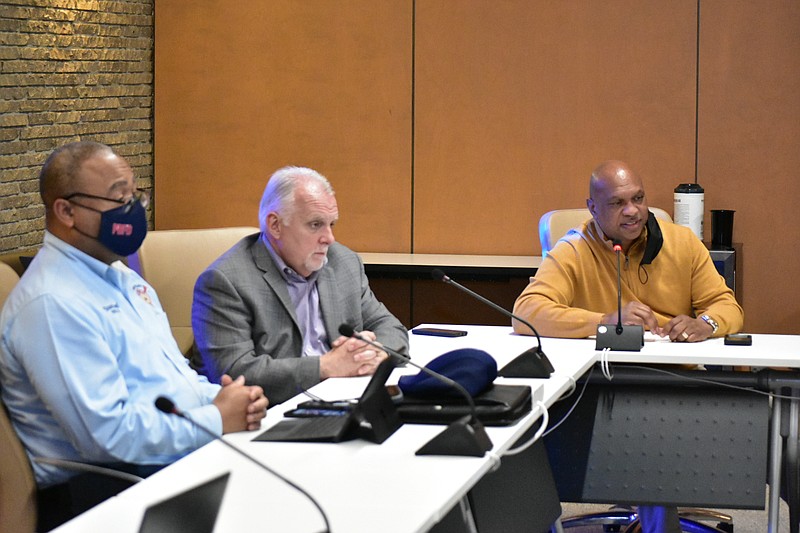 Water pressure has significantly increased in each of its three plants, with Plant 2 on 28th Avenue being isolated so that the pressure improvements will affect the lines going to Jefferson Regional Medical Center, according to Mike Beatty, a Liberty executive who spoke during an update meeting Tuesday afternoon.

Plants operate at 50-60 psi across the entire system under normal operations, according to Beatty.

"We're not exactly where we need to be, but we're getting there," he said.

The refurbished filters at Plant 1 were not yet turned on because of a water sample that the Arkansas Department of Health ruled was inconclusive, Beatty said. The filters underwent maintenance to increase the plant's operation.

"The water pressure has slightly better, but I don't think it can handle 1,200 to 1,500 kids," Watson Chapel Superintendent Jerry Guess said.

Liberty President David Swain arrived in Pine Bluff on Tuesday to assess the damage to the water system after last week's brutal cold spell. A "few" major leaks were detected at the old Sunbeam Bakery facility near downtown, and 141 faults have been found in customer-owned pipes that are not Liberty systems, the company said. When those leaks are reported, Liberty shuts off water at the meters to allow customers to begin repairs.

"People are used to having water on a day-to-day basis," Swain said. "We're not out of the woods just yet. We've got a long way to go, and we don't want to give a false sense of security."

Swain asked that anyone who notices something out of the ordinary with their water service to call Liberty at (855) 382-6511.

"It's important to see you and to see your concern for our city," Jefferson County's County Judge Gerald Robinson told Swain.

Robinson said Friday that he issued an emergency order allowing him to waive the bidding process as he seeks professional services to help remedy the Pine Bluff water system. White Hall Mayor Noel Foster suggested that some plumbers who could help.

Despite the start of investigations into Liberty Utilities by the Arkansas Public Service Commission and Arkansas Attorney General Leslie Rutledge, Robinson praised Liberty officials and incident command members, which include city officials and hospital leaders, for their teamwork in seeking to restore the water system. Robinson told Liberty leaders that the admonishments against them may have seemed more pointed because their utility is the only water provider for Pine Bluff.

"Everybody is on the same path," Robinson said. "It took a while to get there. It was imperative for the residents of Jefferson County to see us come together."

Beatty said "the continued support for this city is coming together in this crisis."