Study in order for parking along West Avenue in Fayetteville, transportation committee says 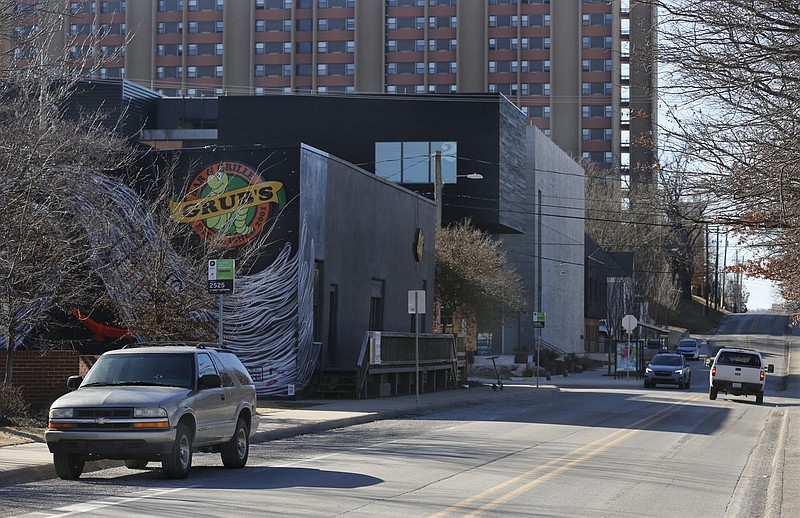 Parking is available Tuesday near the intersection of West Avenue and Spring Street in Fayetteville. The City Council's Transportation Committee discussed ways to regulate about 31 on-street parking spaces on West Avenue as part of the planned cultural arts corridor downtown. Check out nwaonline.com/210224Daily/ and nwadg.com/photos for a photo gallery. (NWA Democrat-Gazette/David Gottschalk)

FAYETTEVILLE -- City staff will study on-street parking use on West Avenue to determine whether creating a paid parking district may be appropriate once street improvements associated with the arts corridor downtown are complete.

The city has three paid parking districts. One is the Dickson Street entertainment district using payment kiosks or a cellphone app, with residential and business permits available. Another is the downtown square with coin-operated meters. A third is the Wilson Park neighborhood, which was created at the end of 2019 to allow visitors to pay to park with an app and neighbors to park for free.

Justin Clay, the city's parking manager, on Tuesday asked the City Council's Transportation Committee for direction on how to handle a likely increased demand for on-street parking on West Avenue once the planned cultural arts corridor is built. Work on West Avenue from Dickson to South streets and its intersecting streets is part of the first phase of the arts corridor project, set to last through the end of the year. The stretch is planned to have 31 on-street parking spaces.

The arts corridor project also involves turning the parking lot west of the Walton Arts Center into a civic green space, with a new parking deck built at the northwest corner of Dickson Street and West Avenue. Construction of the deck is set to happen this year, with construction of the civic space scheduled for next year.

Those projects, plus the expanded Fayetteville Public Library and increased development south of South Street, warrant taking a look at the parking situation, the committee agreed.

Council Member Matthew Petty said in general, if it's difficult to find a space in a certain area then paid parking might be in order. He advocated for a tailored approach taking into account specific hours and days, although he recused from conversation about Prairie Street because he has a business interest in the area.

Council Member Sonia Gutierrez said she hoped a study would help identify any parking issues on Prairie Street, although less frequent use because of covid-19 should be considered and businesses should be kept in the loop. Council Member Sarah Bunch said she was in favor of a solution with a careful eye toward balancing the needs of visitors and residents in that area.

In other business, the committee recommended the full City Council accept a $128,900 contract with McClelland Consulting Engineers in Fayetteville for preliminary designs associated with work on North Street from Garland Avenue to Mission Boulevard. The planned work primarily involves putting a sidewalk on at least one side of the road along the stretch, pedestrian improvements on the west side near campus and adding turn lanes at the intersection with College Avenue, Brown said.

The project was included among a $70 million transportation bond issue voters approved in April 2019. It was listed with a proposed budget of $3.42 million. The contract with McClelland will help fine-tune the budget figure, Brown said.

Petty said he hoped the budget would allow for sidewalks on both sides of North Street, especially near campus, since the city will already be doing work in the area.

A roundabout also is proposed at North Street and Mission Boulevard. That feature's design is part of a larger Mission Trail project and a draft plan should go before the committee soon, Brown said. The money for construction of the roundabout will come out of the $3.42 million budget for North Street, he said.

• Recommended the full City Council accept a $308,185 contract with McClelland Consulting Engineers in Fayetteville to design an extension of Industrial Drive from where the street dead-ends southwest to City Lake Road.

• Expressed support for a bill making its way through the state Legislature that would give bicyclists the same rights as pedestrians at crosswalks.