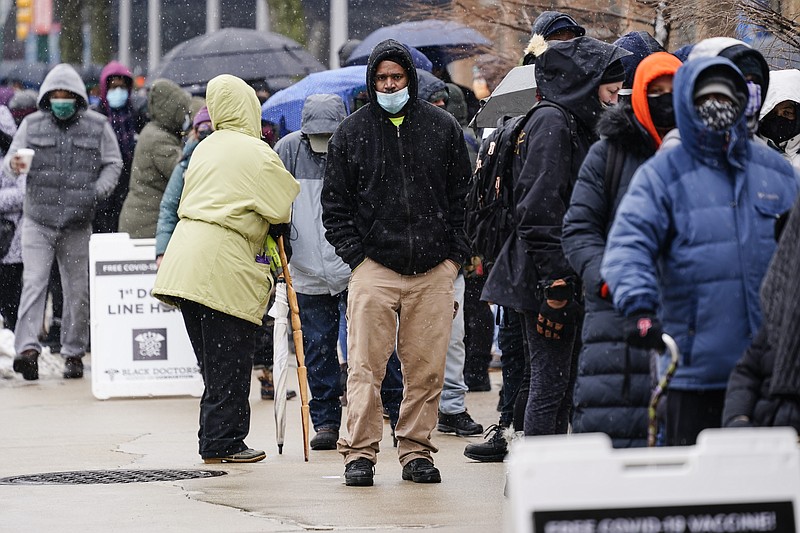 WASHINGTON -- Makers of covid-19 vaccines told Congress on Tuesday to expect a big jump in the delivery of doses over the coming month, and the companies insist that they will be able to provide enough for most Americans to get inoculated by summer.

By the end of March, Pfizer and Moderna together expect to have provided the U.S. government with 220 million vaccine doses, up sharply from the roughly 75 million shipped so far.

"We do believe we're on track," Moderna President Stephen Hoge said, outlining ways that the company has ramped up production. "We think we're at a very good spot."

That's not counting a third vaccine, from Johnson & Johnson, that's expected to get a green light from regulators soon. The Biden administration said Tuesday that it expects about 2 million doses of that vaccine to be shipped in the first week, but the company told lawmakers that it should provide enough of the single-dose option for 20 million people by the end of March.

Looking ahead to summer, Pfizer and Moderna expect to complete delivery of 300 million doses each, and Johnson & Johnson aims to provide an additional 100 million doses. That would be more than enough to vaccinate every American adult, the goal set by the Biden administration.

Two other manufacturers, Novavax and AstraZeneca, have vaccines in the pipeline and anticipate eventually adding to those totals.

[Video not showing up above? Click here to watch » https://www.youtube.com/watch?v=vPtBs5i0_mY]

Asked if they face shortages of raw materials, equipment or funding that would throw off those schedules, all of the manufacturers expressed confidence that they had enough supplies and had already addressed some of the early bottlenecks in production.

"At this point I can confirm we are not seeing any shortages of raw materials," said Pfizer's John Young.

The hearing by a House subcommittee came as U.S. vaccinations continue to accelerate after a sluggish start and recent disruptions caused by winter weather. More than 44 million Americans, or about 14%, have received at least one dose of either the Pfizer or Moderna vaccine, and about 1.4 million per day got a first or second dose over the past seven days, according to the CDC.

"The most pressing challenge now is the lack of supply of vaccine doses," Rep. Diana DeGette, D-Colo., said as she opened the hearing. "Some of the companies here today are still short of the number of doses they promised to initially deliver when they last testified before this subcommittee in July."

Pfizer and Moderna, which both make mRNA vaccines, fell far short of the delivery schedules set by the Trump administration in December, when their vaccines received emergency authorization from the Food and Drug Administration.

That's prompted Congress to scrutinize the companies' plans for vaccine development and delivery, which they noted benefited from $16 billion in federal funding.

"A significant amount of American tax dollars were invested to be able to produce the vaccine immediately upon approval," said Rep. David McKinley, R-W.Va., who questioned executives on why they were still unable to meet demand for the vaccines.

But both companies are expressing confidence in their latest promises after continuing to invest in manufacturing and steadily advancing production. Combined, the two companies have contracts to provide 600 million doses, which they say will be ready by the end of July.

Pfizer, which is partnered with Germany's BioNTech in production of its vaccine, has laid out an aggressive timeline for boosting deliveries in coming weeks, according to Young's advance testimony. The company has been pouring money into doubling batch sizes and adding manufacturing suites, as well as making its own supply of crucial raw materials called lipids and creating its own finish-fill capacity to put batches of vaccine into vials for shipment.

Pfizer reported last week during Biden's visit to its Kalamazoo, Mich., manufacturing plant that it had reduced manufacturing time from 110 days to about 60 days.

Pfizer also benefited from an FDA decision that recognized "overfill" in its vials as a sixth dose, creating a 20% increase in its deliveries.

Uneven weekly production is among the reasons the Biden administration has not issued new promises beyond its initial goal of delivering 100 million shots within the president's first 100 days, despite drugmakers' more ambitious promises, according to a senior administration official who, like other officials addressing production schedules, spoke on the condition of anonymity because of the matter's sensitivity.

The administration is aiming to hold the companies to their commitments, the official said, while maintaining "collaborative enough relationships where they will share risks, as opposed to putting a gun to their head and saying, 'You have to do X or Y and we don't want to hear anything about it.'"

Two other Biden administration officials said it was unlikely that 220 million vaccine doses would be distributed by the end of March, even if a quantity approaching that total was allocated to states and other jurisdictions without being shipped by then. One official said just shy of 200 million doses was a more realistic estimate.

Rep. Frank Pallone, D-N.J., questioned Johnson & Johnson Vice President Richard Nettles on why the company has fallen behind on the schedule outlined in its federal contract, which included delivering 12 million doses by late February.

Nettles said only that the company has faced "significant challenges" because of its "highly complex" manufacturing process. But he noted that the company is partnering with drugmaker Sanofi to further expand production.

"This has been an unprecedented effort to scale up manufacturing for a vaccine against a disease that didn't even exist more than a year ago," Nettles told lawmakers.

The Trump administration's Operation Warp Speed focused most of its efforts on racing vaccines through research, development and manufacturing. But little planning or funding went to coordinating vaccination campaigns at the state and local levels. That effort is now picking up speed with plans for mass vaccination sites and an increasing supply distributed to chain pharmacies.

The stepped-up efforts come as the covid-19 death toll in the U.S. surpassed 500,000, far more than any other country.

Although average daily deaths and cases have been falling, some experts say not enough Americans have been inoculated for the vaccine to be the reason. The decline instead is attributed to the passing of the holidays, more people staying indoors during the winter, and better adherence to mask rules and social distancing.

What's more, they warn that dangerous variants could cause the trend to reverse itself. States are responding by simultaneously trying to catch up from last week's pause and gear up to vaccinate more people in coming weeks.

In Mississippi, where covid-19 vaccinations plummeted last week during freezing weather and icy roads, health officials were automatically rescheduling appointments, and planned to schedule more than normal through the weekend.

The state Department of Health said Monday that just 32,540 vaccinations were given in the state last week, down from 106,691 the previous week.

Nevada Gov. Steve Sisolak said Monday that 46,000 doses of Moderna's vaccine that were delayed by weather began arriving in the state. The head of the state's Bureau of Child, Family and Community Wellness said officials would work overtime to administer those doses along with this week's regularly scheduled shipment.

"This change will make it easier for our most vulnerable Arizonans ... to get vaccinated," Ducey said.

Newsom said the state also is sending 34,000 extra vaccine doses to that area from a pharmacy that wasn't using them quickly enough.

Meanwhile, Tennessee's top health official said Tuesday that more than 2,400 doses of the covid-19 vaccine went to waste over the past month in Shelby County, which encompasses Memphis, while officials sat on tens of thousands of shots that they thought had already gone into arms. 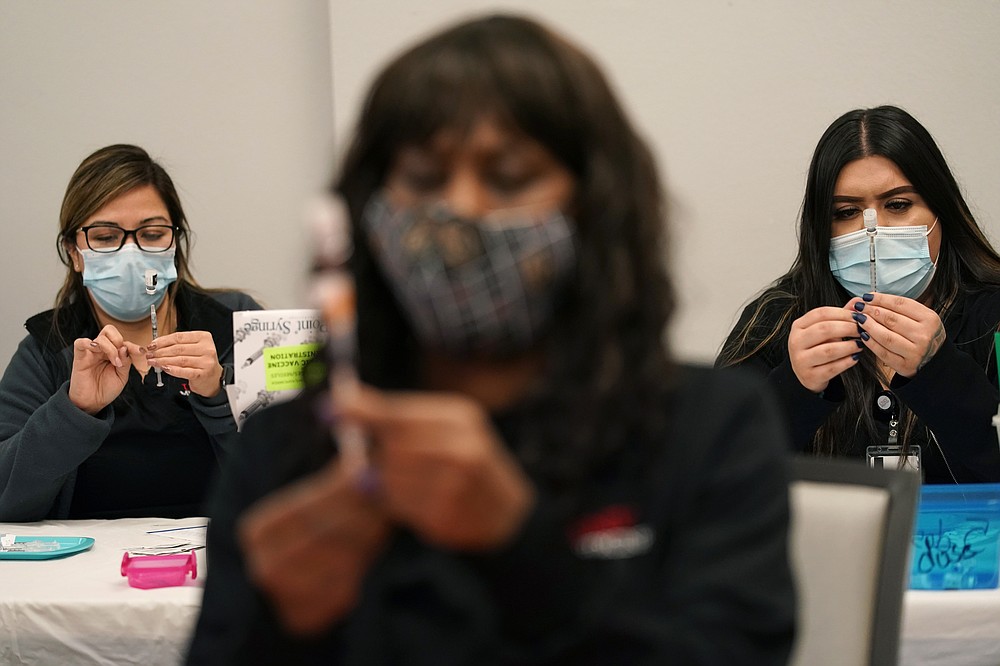 FILE - In this Jan. 22, 2021, file photo, certified medical assistants Martha Sida, from left, Tina Killebrew and Cynthia Bernal prepare doses of the Pfizer-BioNTech COVID-19 vaccine at a vaccination center at the University of Nevada, Las Vegas, in Las Vegas. COVID-19 vaccine makers tell Congress to expect a big jump in the delivery of doses over the coming month. The companies insisted Tuesday, Feb. 23, at a hearing that they will be able to provide enough vaccine for most Americans by summer. (AP Photo/John Locher) 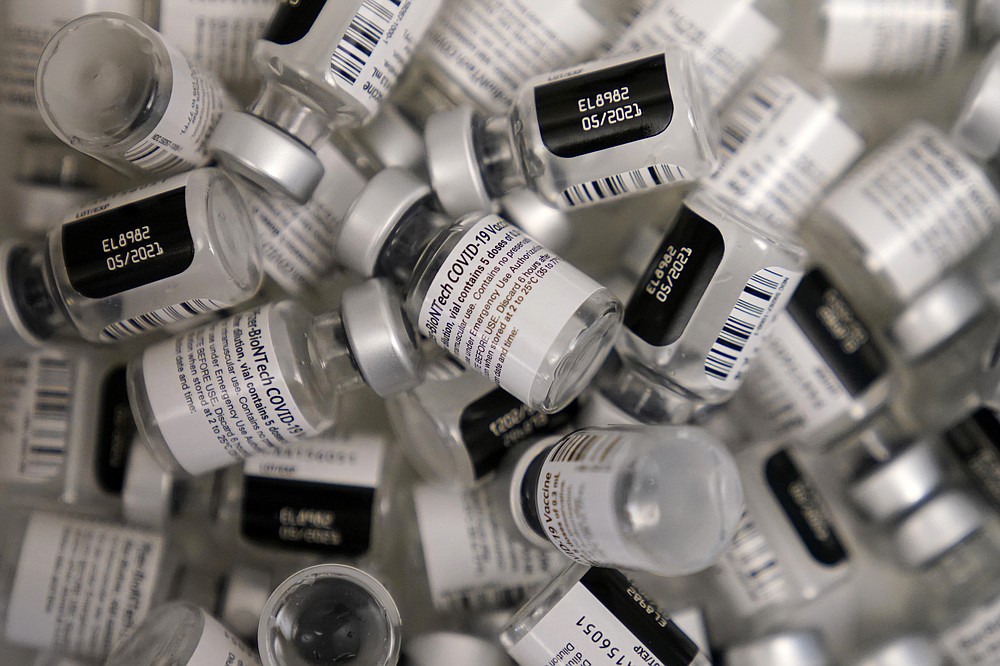 FILE - In this Friday, Jan. 22, 2021, file photo, empty vials of the Pfizer-BioNTech COVID-19 vaccine are seen at a vaccination center at the University of Nevada, Las Vegas. COVID-19 vaccine makers tell Congress to expect a big jump in the delivery of doses over the coming month. The companies insisted Tuesday, Feb. 23, at a hearing that they will be able to provide enough vaccine for most Americans by summer. (AP Photo/John Locher, File) 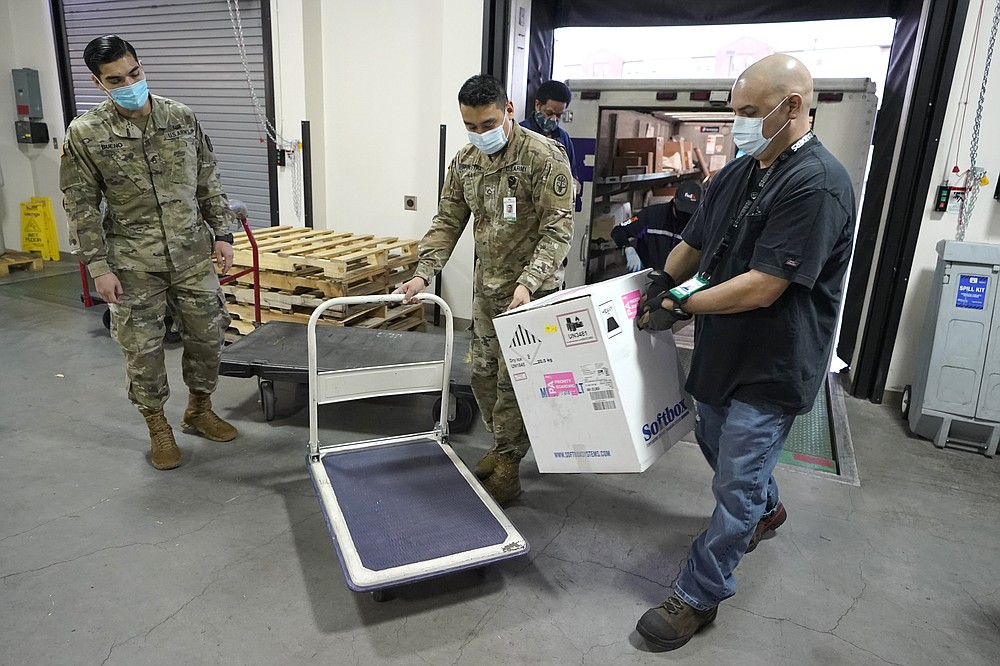 FILE - In this Dec. 15, 2020, file photo, Staff Sgt. Noel Bueno, left, Pfc. Saurav Shrestha, center, and Mark Robinson, right, take delivery of a box of the first shipment of the Pfizer vaccine for COVID-19 before putting it in a freezer shortly after it arrived at Madigan Army Medical Center at Joint Base Lewis-McChord in Washington state, south of Seattle. COVID-19 vaccine makers tell Congress to expect a big jump in the delivery of doses over the coming month. The companies insisted Tuesday, Feb. 23, at a hearing that they will be able to provide enough vaccine for most Americans by summer. (AP Photo/Ted S. Warren, File) 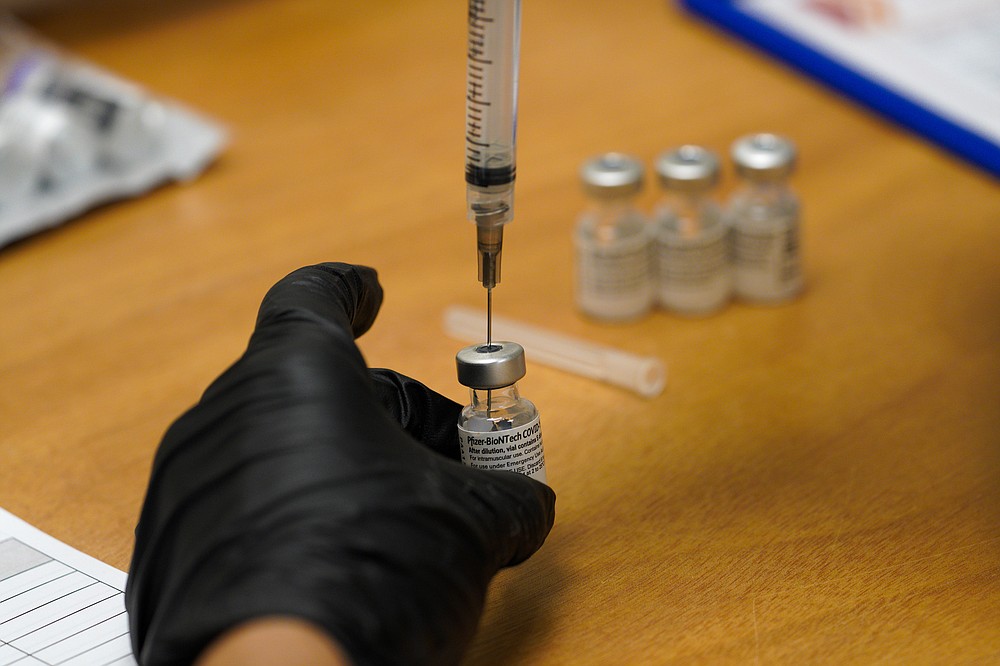 FILE - In this Feb. 12, 2021, file photo, scripps health official draws from a vile of the COVID-19 vaccine prior to administering it at their new drive-thru vaccination site at the Del Mar Fairgrounds in Del Mar, Calif. Executives from the major COVID-19 vaccine producers are set Tuesday, Feb. 23, to answer questions from Congress about expanding the supply of shots needed to curb the pandemic that has killed more than 500,000 Americans. (Nelvin C. Cepeda/The San Diego Union-Tribune via AP, Pool, File) 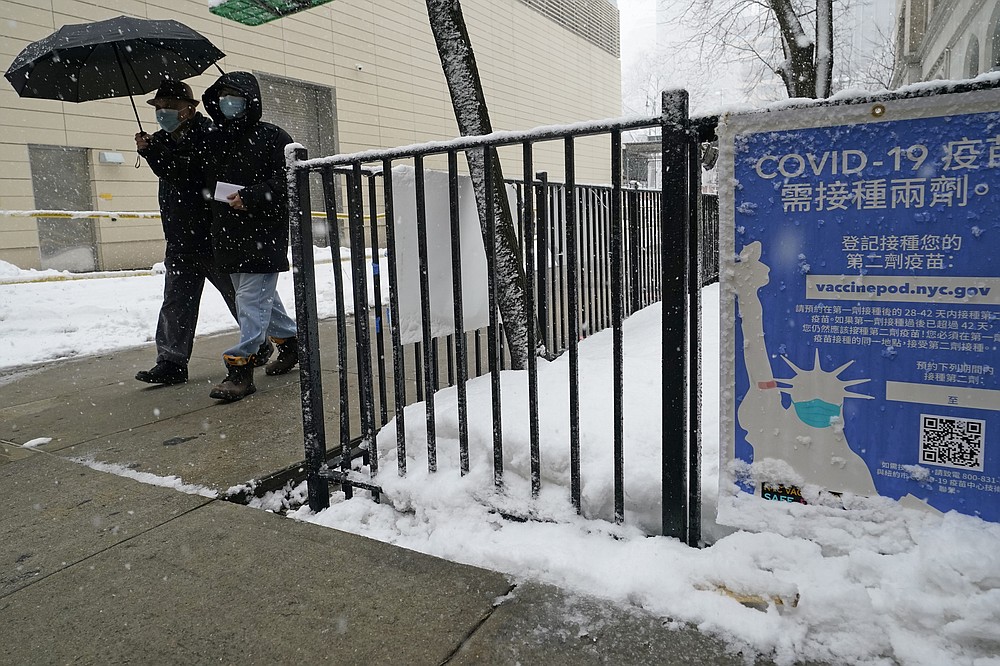 FILE - In this Feb. 7, 2021, file photo, two people enter a New York City vaccine hub during a snowstorm in New York. Executives from the major COVID-19 vaccine producers are set Tuesday, Feb. 23, to answer questions from Congress about expanding the supply of shots needed to curb the pandemic that has killed more than 500,000 Americans. (AP Photo/Kathy Willens, File) 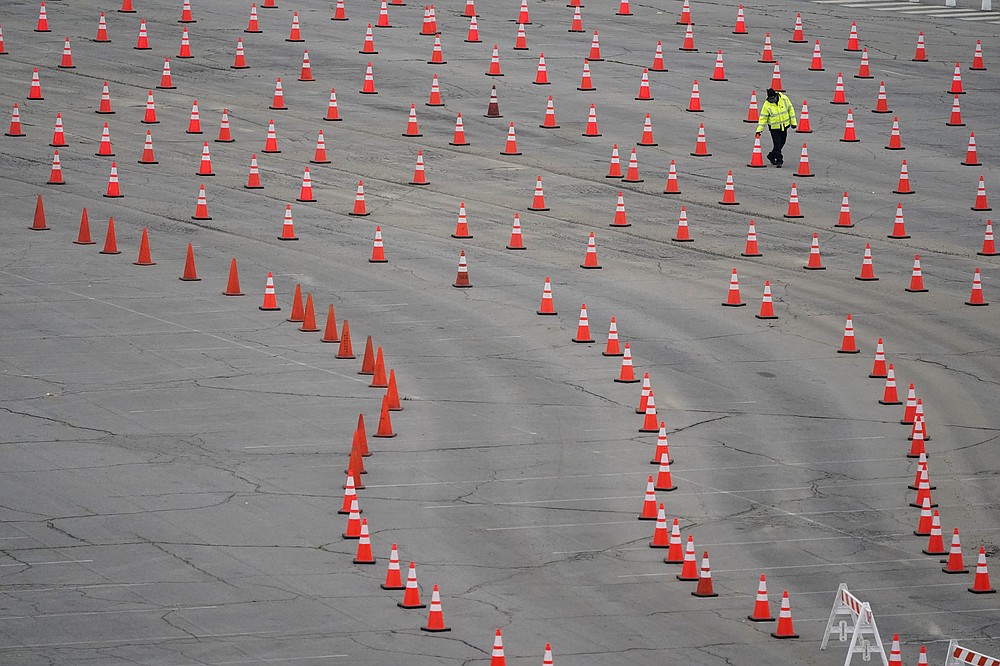 FILE - In this Feb. 11, 2021, file photo, a worker arranges cones at a mostly-empty vaccination site at Dodger Stadium in Los Angeles. Executives from the major COVID-19 vaccine producers are set Tuesday, Feb. 23, to answer questions from Congress about expanding the supply of shots needed to curb the pandemic that has killed more than 500,000 Americans. (AP Photo/Marcio Jose Sanchez)
ADVERTISEMENT