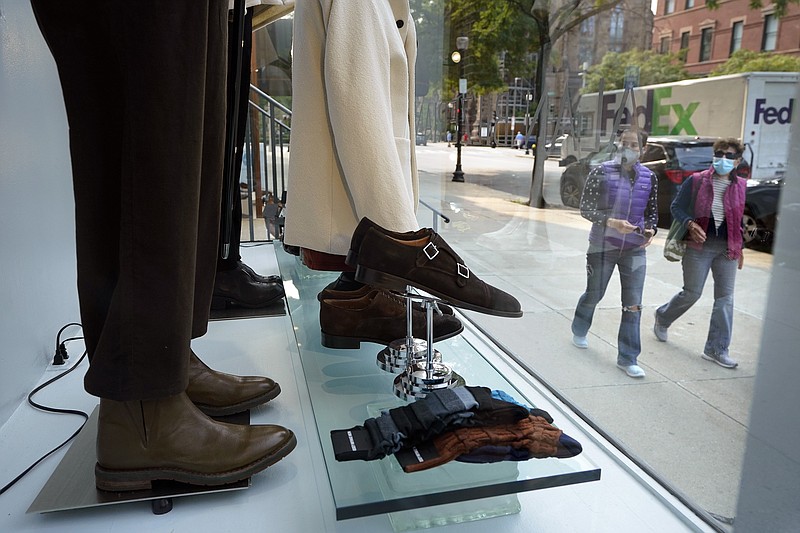 FILE - In this Tuesday, Sept. 15, 2020, file photo, passers-by examine a storefront window in Boston's fashionable Newbury Street shopping district. U.S. consumer confidence dipped slightly in October as a new wave of coronavirus cases began across the country. The Conference Board reported Tuesday, Oct. 27, 2020, that its consumer confidence index fell to a reading of 100.9, from 101.8 in September. (AP Photo/Steven Senne)

SILVER SPRING, Md. -- U.S. consumer confidence rose again in February as an accelerating covid-19 vaccine push provides hope for Americans who have lived through a year of unprecedented restrictions.

However, despite the improved vaccination rollout, consumers are more optimistic about current conditions than they are about the near future. The present situation index, which is based on consumers' assessment of current business and labor market conditions, rose to 92 from 85.5 last month.

But the expectations index -- based on consumers' near-term outlook for income, business, and labor conditions -- ticked down slightly to 90.8 this month from 91.2 in January. That's somewhat surprising to economists as many experts have predicted that widespread vaccinations and the prospect of warmer weather could make for a summer of relative normalcy.

"One would imagine that the prospect of vaccines being rolled out to all Americans would boost confidence for the future," said Jennifer Lee, an economist with BMO Capital Markets. "Not the case this month." Lee noted that she thought consumer confidence would continue to improve in the coming months as more people are vaccinated and businesses fully reopen.

The percentage of consumers expecting business conditions to improve over the next six months fell to 31% from 34.1%. Those expecting conditions to worsen, however, also declined.

"Consumers remain cautiously optimistic, on the whole, about the outlook for the coming months," Lynn Franco, senior director of economic indicators at the Conference Board, said in a statement.

Consumers' assessment of the job market also was mixed.

The share of survey respondents who said that jobs are plentiful rose to a three-month-high of 21.9%, while fewer respondents said jobs were hard to get. Slightly fewer consumers expect their incomes to increase in the next six months, but fewer see their incomes declining.

Still, respondents indicated they are less likely to make big purchases in the months ahead. The share of people expecting to buy major appliances, a home or cars fell.

Respondents also expect prices to pick up in the coming year. The Conference Board's data showed consumers expect inflation to rise to 6.3%, the highest since June.

The consumer confidence index, which is closely watched by businesses and economists because consumer spending makes up about 70% of U.S. economic activity, had been over 100 for nearly four years before the pandemic struck last spring.

Average daily covid-19 deaths and cases have plummeted in the past few weeks. Virus deaths have fallen from more than 4,000 reported on some days in January to an average of fewer than 1,900 per day.

While winter weather has hamstrung vaccination efforts the past couple of weeks, supply is catching up with need and experts expect distribution to accelerate further as the weather improves.