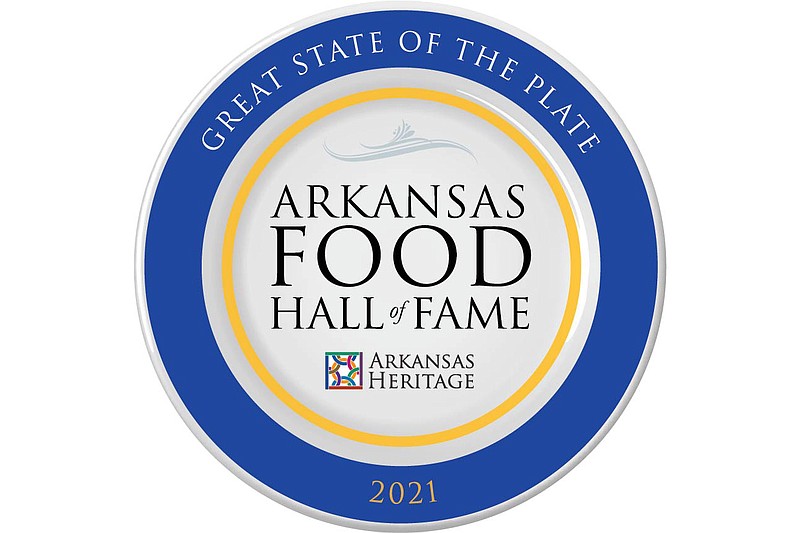 Feltner's Whatta-Burger in Russellville, Monte Ne Inn Chicken in Rogers and Star of India in Little Rock are the class of 2021 entrants into the Arkansas Heritage Department's Arkansas Food Hall of Fame. The department announced the three honorees at a virtual award ceremony Monday evening.

Matt McClure, executive chef of The Hive in Bentonville, receives the Proprietor of the Year Award. The top Food-Themed Event is the Bradley County Pink Tomato Festival. The top choice for "Gone But Not Forgotten" honors is North Little Rock's Roy Fisher's Steak House. And the People's Choice Award goes to Bistro Bar & Grill in Helena-West Helena. Corn was the choice of the judging panel of food professionals, foodies and food writers to be the Food of the Year for 2021.

That panel chose first finalists and subsequently the award-winners from nominations submitted by members of the public — more than 2,000 submissions from all 75 Arkansas counties — except for the People's Choice Award, which is based on the number of nominations the establishment receives.

The Food Hall of Fame was launched by Arkansas Heritage in 2016 to recognize Arkansas' iconic restaurants, proprietors and food-theme events.

Last week's inclement weather caused restaurant and other business closures across the state, but beyond the snow and ice per se, other weather-related factors came into play. For example, sister restaurants Loca Luna and Red Door, which initially had been announced as reopening over the weekend, remained closed because "our delivery truck won't be able to make it in time." Both restaurants reopened Tuesday. And ZaZa Fine Salad + Wood-Oven Pizza Co. stayed open throughout the weekend, but only after Yellow Rocket Concepts partner Scott McGehee put out an appeal Sunday on his personal Facebook page, lamenting that the place's supplier had run out of dry wood ("White Oak/Red Oak/Hickory etc.") for the ovens. McGehee's friends rallied with suggestions on where to get some, and he subsequently posted that he'd found what he needed and "The pizza ovens will not go dark today!"

Recently filed Little Rock building permits, which come under the eye of Business section reporter Noel Oman, causes David Bubbus' name to surface again, in conjunction with a "shell building" under construction by Bubbus' Anchor Realty Investments LLC at 11915 Interstate 30. What that will eventually constitute we do not know. Oman also turned up a plumbing permit for a "David's Burgers shell building" at the site.

Also popping up: A permit for $450,000 in construction for the Waffle House at 3202 Bankhead Drive, just south of the Interstate 440 exit for the Bill and Hillary Clinton National Airport, to "remove and replace existing interior walls, ceilings, HVAC and electrical systems, equipment, doors and frames," as well as new seating and bathroom reconstruction "to be [Americans for Disabilities Act] compliant" and a few other interior and exterior details. And one for $450,000 going toward remodeling the McDonald's that's part of the Valero station and convenience store at 7200 W. 12th St., where 12th Street, Kanis Road and South Rodney Parham Road come together just south of Interstate 630.

It's not a restaurant, per se, but our attention has been called to Roux Le'Doux Catering, a Little Rock operation that owner and namesake Kelli LeDoux bills as "Central Arkansas' only 100% authentic and licensed Cajun cuisine caterer." LeDoux, according to the website, rouxcater.com, "is a fourth generation cuisinier a la maison, serving recipes handed down from her great-grandmother, Olga Landry of New Orleans." LeDoux's menu includes breakfast, soup and appetizers, plus a range of hot entrees — Cajun chicken and dumplings, red beans and rice with smoked sausage, chicken and sausage jambalaya, Cajun meat pie, shrimp and grits, crawfish etouffee, shrimp (Creole, barbecue, enchiladas), crawfish cornbread, boxed po'boy lunches, pastas and desserts. The phone number is (501) 412-7991. 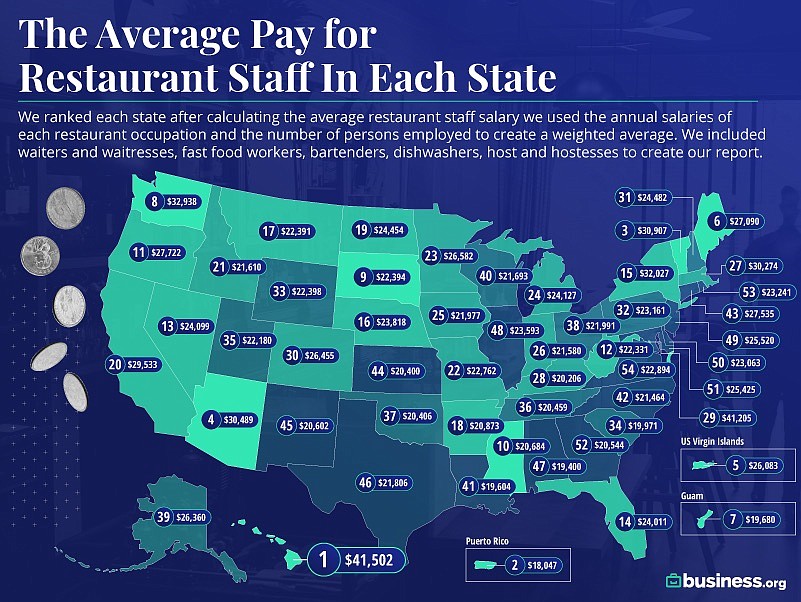 Arkansas is 18th in Business.org’s ranking of the best and worst paying states for restaurant workers. (Special to the Democrat-Gazette)

And Business.org reports that there are more than 8.1 million restaurant workers (counting servers, fast food workers, bartenders, dishwashers, hosts and hostesses) in the United States who earn an average salary of $24,861. That's 54% less than a total of all occupations across the country. Arkansas is 18th in their ranking of the best and worst paying states (including Washington, D.C.) for restaurant staff (tinyurl.com/ 1cgteprr), whose average salary here is $20,873, compared to the statewide average of $42,690 for all professions. The survey also notes that since the pandemic began, more 110,000 restaurants shut down, whether long term or permanently. Hawaii, by the way, is the best-paying state for restaurant workers — an average salary of $41,502. To make these calculations, they used each restaurant occupation's annual salary and the number of persons employed to create a weighted average.