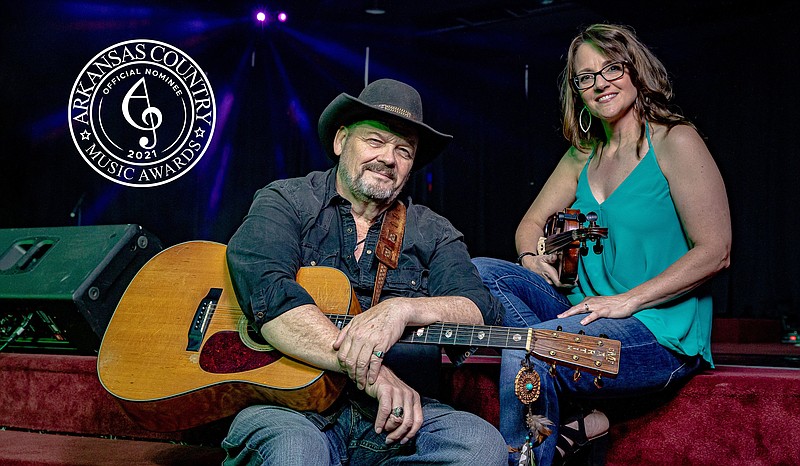 Lee Street Lyrical features Buddy Case and Casey Penn, repeat nominees for Arkansas Country Music Awards, as designated by the seal on their publicity photo. They play Saturday afternoon in Roland. (Special to the Democrat-Gazette)

Described as a harmony-rich duo, Lee Street Lyrical "delivers a lively variety of music (including originals) reflective of many musical influences," according to their biography. The duo is an Arkansas Artist on Tour Roster member and a repeat Arkansas Country Music Awards nominee and is well traveled on the festival circuit.

Penn, an award-winning singer-songwriter and fiddler, was born in Wyoming but has been a transplanted Southerner since 1983. Case, from the Enola area, has played for audiences for five decades and with some of music's most respected artists, including Central Arkansas' Tenpenny Gypsy. He's a singer-songwriter, a studio musician with nine albums to his credit and also teaches guitar lessons.

For the 2021 Arkansas Country Music Awards, they are up for acoustic act of the year. Separately, Case is nominated for guitarist of the year.

Voting for the country music awards takes place between March 1-14 at Arkansasmusic.org.

"Mad Battle," which was to have been held last Saturday, was postponed until March 6.

◼️ Scenic 7 will perform at 7 p.m. Saturday at the Wagon Wheel, 816 Albert Pike Road, Hot Springs. Admission is free, although membership in the club is $10.

◼️ "American Idol" winners Kris Allen, from Conway, and David Cook will perform at 1 p.m. Saturday in a livestream concert in a "pay what you can" show on stageit.com.

The show is a pay what you can event, through paypal.com.

Fans can access the festival with a minimum $25 donation to The Village Fund through Eventbrite.com.

◼️ The Hope Lives On Virtual Festival will be held at 7 p.m. Saturday on the Christian Festival Association Facebook page, where 26 annual festivals have united to offer the free gathering.

◼️ The Rifters will perform a "Livestream for Texas!" at 8 p.m. Saturday on Facebook. Admission is free; the band will donate one-fourth of their tip jar take to assist storm-ravaged Texas, their border state.

Formed in Taos, N.M. in 2002, The Rifters are a three-man band consisting of Jim Bradley and Don Richmond of Hired Hands and Rod Taylor of The Rounders.

There is a suggested donation of $25; to donate, see tennesseeriverkeeper.org.

◼️ Texas singer-songwriter Hayes Carll, a Hendrix College graduate who performs his "Alone Together Tuesday" livestream show each week at 6 p.m. Tuesday, will donate a portion of the proceeds to a different charity in Texas each week. The episode will be his 43rd consecutive show. Donations can be made through Venmo, PayPal or Patreon.

Melissa Carper, the Northwest Arkansas singer-songwriter-bassist, has released the second single, "I Almost Forgot About You," from her debut solo album, "Daddy's Country Gold," which will be released March 19. Carper is also a member of Sad Daddy, The Carper Family and Buffalo Gals.

◼️ Morrilton native Matt Stell has a new single, "That Ain't Me No More," which has been named the most-added single of the week on country music radio.

I was vaguely aware of stereogum.com, but only really looked closely at what it offered when I wondered what had been written about The Mekons and found there an intriguing list of a writer's top 10 Mekons' songs. Delving further, there were similarly well-written lists devoted to the songs of Grandaddy and Steely Dan. Other artists featured included: Chris Stapleton, Bon Iver, Kendrick Lamar and Charli XCX.