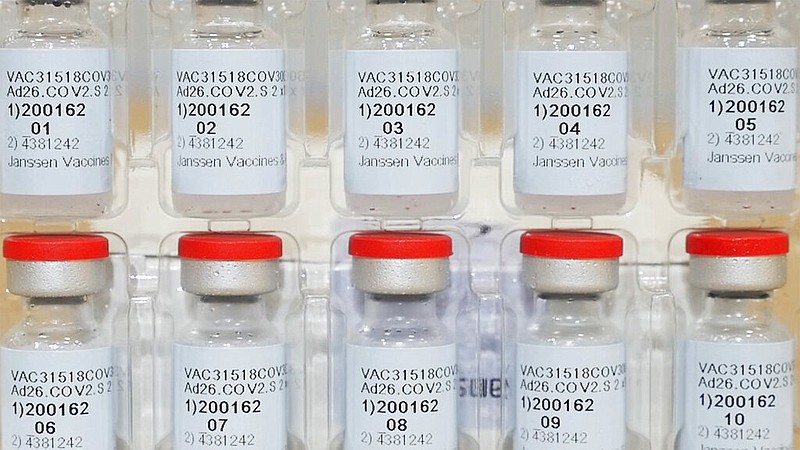 FILE - This Dec. 2, 2020 photo provided by Johnson & Johnson shows vials of the Janssen covid-19 vaccine in the United States.

WASHINGTON — Johnson & Johnson’s single-dose vaccine offers strong protection against severe covid-19, according to an analysis released Wednesday by U.S. regulators that sets the stage for a final decision on a new and easier-to-use shot to help tame the pandemic.

The long-anticipated shot could offer the nation a third vaccine option and help speed vaccinations by requiring just one dose instead of two. Food and Drug Administration scientists confirmed that overall the vaccine is about 66% effective at preventing moderate to severe covid-19, and about 85% effective against the most serious illness. The agency also said Johnson & Johnson’s shot is safe.

The analysis is just one step in the FDA’s evaluation. On Friday, the agency’s independent advisers will debate if the evidence is strong enough to recommend the vaccine. With that advice, the FDA is expected to make a final decision within days.

The covid-19 death toll in the U.S. topped 500,000 this week, and the vaccination drive has been slower than hoped, hampered by logistical and weather delays. So far, about 44.5 million Americans have received at least one dose of vaccine made by Pfizer or Moderna, and nearly 20 million of them have received the second dose required for full protection.

Tests showed that the Pfizer and Moderna vaccines were 95% effective at protection against symptomatic covid-19.

Dr. Paul Offit, a vaccine expert at Children’s Hospital of Philadelphia, is part of the FDA advisory panel that will scrutinize the Johnson & Johnson data Friday and cautions that none of the vaccines have been directly compared. Still, he was encouraged that one dose of the Johnson & Johnson vaccine appears as good at preventing serious illness as its two-dose competitors.

“This is a vaccine to prevent you from going to the hospital and dying at a level that’s certainly comparable” to the Pfizer and Moderna vaccines, he said.

Johnson & Johnson tested its single-dose option in 44,000 adults in the U.S., Latin America and South Africa. Different mutated versions of the virus are circulating in different countries, and the FDA analysis cautioned that it’s not clear how well the vaccine works against each variant. But Johnson & Johnson previously announced that the vaccine worked better in the U.S. — 72% effective against moderate to severe covid-19, compared with 66% in Latin America and 57% in South Africa.

South Africa recently began giving the Johnson & Johnson vaccine to front-line health workers on a test basis after deciding that a vaccine from rival AstraZeneca had not shown strong enough study results against the particularly concerning variant spreading there.

[Video not showing up above? Click here to watch » https://www.youtube.com/watch?v=gSXb25apYIg]

“I was reassured” that despite different variants, the Johnson & Johnson shot still protected against serious illness, said Dr. Jesse Goodman of Georgetown University, a former FDA vaccine chief. “That’s pretty robust data.” In case the vaccines eventually need to be updated, manufacturers are working on adjustments to their recipes. Moderna announced Wednesday that it is ready to begin testing experimental doses that better match the South African version of the virus.

The FDA said effectiveness and safety were consistent across racial groups, including Black and Hispanic participants.

All of the world’s covid-19 vaccines have been tested differently, making comparisons nearly impossible. It would not be surprising if one dose turned out to be a little weaker than two doses, and policymakers will decide if that’s an acceptable trade-off to get more people vaccinated faster.

Johnson & Johnson has another large study underway to see if a second dose of its vaccine works better, raising the prospect that countries could eventually add a booster if one turned out to be warranted.

Like other covid-19 vaccines, the main side effects of the Johnson & Johnson shot are pain at the injection site and flu-like fever, fatigue and headache. No study participant experienced the severe allergic reaction, called anaphylaxis, that is a rare risk of some other covid-19 shots, although one experienced a less serious reaction.

The FDA said there were no serious side effects linked to the vaccine so far, although it recommended further monitoring for blood clots. In the study, those were reported in about 15 vaccine recipients and 10 placebo recipients, not enough of a difference to tell if the vaccine played any role.

Experts say people should not insist on getting vaccines with higher efficacy rates, considering that a joint vaccine from pharmaceutical giant Pfizer and German biotech firm BioNTech, and one from biotech company Moderna went through clinical trials earlier, before certain variants emerged. They fear that the logistical advantages of Johnson & Johnson’s vaccine could be lost if people decide to defer vaccination until they can access a particular shot. Vaccines that transform the virus from a potentially fatal disease into a nuisance illness could end the pandemic, unless they aren’t widely adopted.

“We know this vaccine prevents 85% of the severe disease…. It was 100% effective in preventing hospitalization and deaths, and that’s really what’s important,” said Nancy Bennett, a professor of medicine and public health sciences at the University of Rochester School of Medicine and Dentistry. “Those facts are the most important thing to recognize.” The FDA scientists found that the “known benefits” of the vaccine included reducing the risk of symptomatic and severe cases at least two weeks after vaccination.

People working on the logistics of vaccination see clear benefits from the Johnson & Johnson vaccine because it can be stored in a refrigerator for at least three months, making it simpler to use than other vaccines that must be kept frozen. And because it is a single shot, it does not require a follow-up visit for a booster shot.

David Benkeser, a biostatistician at Emory University’s Rollins School of Public Health, said the lower efficacy in some older study participants warranted additional study but wasn’t yet a huge concern. He noted that the lower efficacy seemed to be driven by older adults with diabetes, and it would be important to check whether their immune responses to the vaccine were lower.

“There’s a chance that this is a bit of bad luck — if you cut the data up many ways, you are bound to find some puzzling results,” Benkeser said in an email. “For now, the news is overall very positive.” Still, the lower efficacy among higher-risk older adults could be a topic of discussion when outside experts meet Friday to recommend whether the FDA should authorize the shot. If the regulatory deliberations follow the path of the previous two authorized coronavirus vaccines a decision could come this weekend.

The Pfizer and Moderna vaccines now being used in the U.S. and numerous other countries must be kept frozen, while the Johnson & Johnson shot can last three months in a refrigerator, making it easier to handle. AstraZeneca’s vaccine — widely used in Europe and Britain — is made similarly and also requires refrigeration but takes two doses.

European regulators and the World Health Organization also are considering Johnson & Johnson’s vaccine. Worldwide, the company aims to produce around a billion doses by the end of the year.

Meanwhile, President Joe Biden plans to distribute millions of masks to Americans in communities hard-hit by the coronavirus beginning next month as part of his efforts to ensure “equity” in the government’s response to the pandemic.

Biden’s plan will distribute masks not through the mail, but instead through Federally Qualified Community Health Centers and the nation’s food bank and food pantry systems, the White House announced Wednesday.

The Departments of Defense, Health and Human Services, and Agriculture will be involved in the distribution of more than 25 million American-made cloth masks in adult and kid sizes. The White House estimates that they will reach 12 million to 15 million people.

“Not all Americans are wearing masks regularly, not all have access, and not all masks are equal,” said White House covid-19 coordinator Jeff Zients.

The White House is not distributing safer N95 masks, of which the U.S. now has abundant supply after shortages early in the pandemic.

The cloth masks adhere to Centers for Disease Control and Prevention guidelines and “certainly they meet those requirements set by our federal standard,” said White House press secretary Jen Psaki.

Biden hinted at the move during a virtual round-table discussion Tuesday with four essential workers who are Black, saying he expected his administration to send millions of masks to people around the country “very shortly.” Biden has asked all Americans to wear masks for the first 100 days of his term, pointing to models showing that it could help save 50,000 lives. He also required mask-wearing in federal buildings and on public transportation in an effort to slow the spread of the virus.

Information for this article was contributed by Lauran Neergaard, Matthew Perrone, Kathy Young, Zeke Miller, Darlene Superville and Hannah Fingurhut of The Associated Press; and by Carolyn Y. Johnson, Laurie McGinley and Isaac Stanley-Becker of The Washington Post.