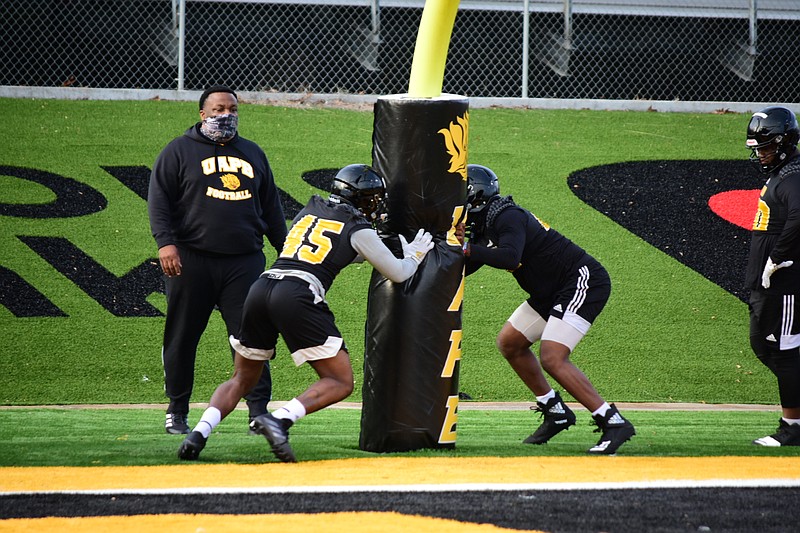 From the time Doc Gamble became interim head football coach last February, the University of Arkansas at Pine Bluff football team has cleared one hurdle after another in pursuit of kicking off a football game for the first time since November 2019.

But just as the Golden Lions hit the homestretch, another obstacle has appeared.

"From last February until now, we've learned how to deal with disappointments," said Gamble, who was given the permanent role last April. "The kids are like, 'All right, Coach, let's go. What's next?' So, we always know, like I told the guys, we've got a great fan and you're always blown away. You can only control what you can control. If you can't, let's keep it moving.'"

The water crisis that has affected most of the city displaced half of the football players and other residential students to hotels in Little Rock, interim Athletic Director Chris Robinson said Thursday.

"To put them through that wouldn't be right," Robinson said. "There's a lot that goes into a season opener when team members are 50 miles away from each other."

The football game was one of three sporting events this week that have been relocated from UAPB.

Friday's home soccer match against Texas Southern will be played at the University of Arkansas at Little Rock. Saturday's two basketball games against Grambling State are tentatively moved to Grambling, La., with times to be announced, but Robinson is keeping the door open to possibly moving those games back to Pine Bluff, depending on whether the water pressure is stable enough to improve sanitation and heating operations.

"One of the major things is prioritizing," he said. "We like to have events that give people a release and allow people to have a venue to get away, but from the standpoint of where we are right now, given how we've been affected by the water pressure, it's caused a lot of things on campus to where our students are currently displaced. A majority of our students are housed in Little Rock. That's our focus, to take care of them."

Fans, however, have not been permitted to sporting events at UAPB as a precaution during the ongoing coronavirus pandemic since January.

Many of UAPB's athletic teams are traveling to contests on the road but would be housed in Little Rock upon returning to Arkansas if the water crisis on campus is not resolved, Robinson said. The UAPB basketball teams were to play at Texas Southern in Houston on Thursday evening.

The UAPB football players who are still on campus live in a housing complex near the football stadium that has not been affected. They've been transported by bus and personal vehicles to Little Rock for practice with the rest of the team at Mills University Studies High School. Wednesday was the first outdoor practice since the snowstorm for the Lions, who held a walkthrough late last week in the ROTC building at UAPB.

"Coach Cortez Lee and their high school have been more than accommodating for us and gracious enough to let us come up and use the facility," Gamble said. Lee is a former head coach at Altheimer and Dollarway high schools.

UAPB's next football game is at 1:30 p.m. March 6 at Southern University in Baton Rouge. The Golden Lions will then play at Grambling State on March 20 and play its first home game against Alabama State in Montgomery on March 27.

The Southwestern Athletic Conference last July moved its football season from the fall semester as a precaution against the coronavirus pandemic, which will reach its first anniversary on March 11. Some Football Championship Subdivision teams began their season last week.

UAPB is scheduled to play six SWAC games. The conference's Western and Eastern division champions will play in the SWAC championship game in May at the site of the team with the better record.

Gamble is staying with the players housed in Little Rock, which gives him and the players a chance to see each other interact outside of the football environment.

"We're looking at everything as a positive," Gamble said. "Something good can come out of everything. To me, it's been a big-time education on [the idea that] some things are certain and change is one of them."

That's not to say that the preparation for one team coming to Pine Bluff hasn't gone out the window.

"The biggest disruption was all the man-hours I put in with the coaches," Gamble said. "The kids just said, 'Hey, let's just go play.' But the coaches put in a lot of work. Just got to go on to the next one."

The wait for the University of Arkansas at Pine Bluff to finally kick off a football season in the 2020-21 academic year has been extended by another week.

UAPB on Thursday announced the home game against Texas Southern has been postponed from Saturday to April 24. The game will still be played at Simmons Bank Field, formerly Golden Lion Stadium.

The Southwestern Athletic Conference last July moved its football season from the fall semester as a precaution against the coronavirus pandemic, which will reach its first anniversary on March 11. Some Football Championship Subdivision teams began their season last week, while UAPB was scheduled to begin a six-game schedule this Saturday.

But last week's snowstorm led to water pressure decreases and leaks that heavily impacted the UAPB campus' heating and sanitation systems. Residential students have been relocated to hotels in Little Rock and Pine Bluff.

UAPB also announced Friday's home soccer match against Texas Southern will be played at the University of Arkansas at Little Rock and will kick off at 6:30 p.m. Saturday's basketball games against Grambling State will now be contested in Grambling, La., with times to be announced.

The UAPB basketball teams were to play at Texas Southern in Houston on Thursday evening.

UAPB's next football game is at 1:30 p.m. March 6 at Southern University in Baton Rouge. The Golden Lions will then play at Grambling State on March 20 and play its first home game against Alabama State on March 27.