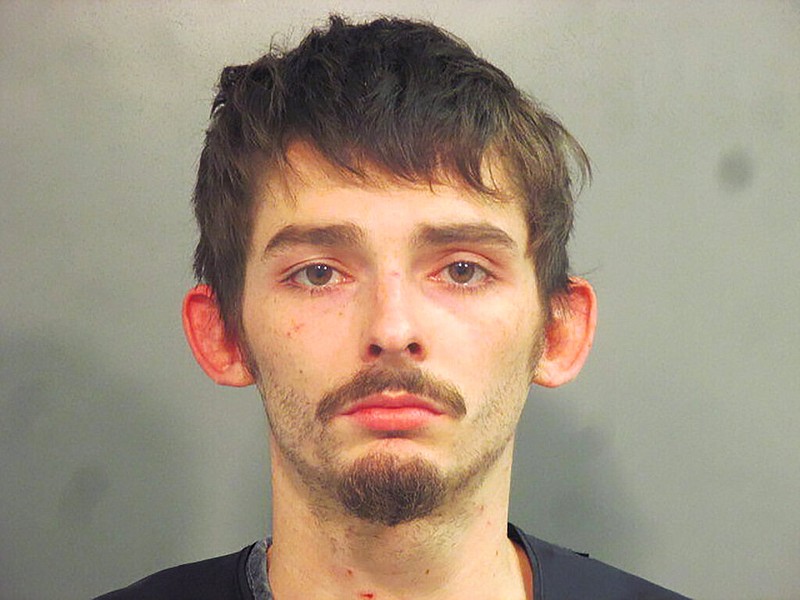 Police arrested a De Queen man Tuesday in the slayings of his mother, stepfather and sister as well as the abduction of a child.

Three bodies were found inside a home southwest of Huntsville on Tuesday afternoon, according to an Arkansas State Police news release. The victims were Tammie Lynn Chenoweth, 51; James Stanley McGehee, 59; and Cheyenne Chenoweth, 26.

According to the preliminary report from the Madison County prosecutor's office, Hunter Chenoweth confessed to the killings, telling police the incident began with an argument between him and his mother, Tammie Chenoweth.

According to the report, Hunter Chenoweth said that he waited for McGehee, to arrive home from work and locked the front door. But when McGehee saw his wife's body on the floor through a window, he "breached the front door," the report recounted Chenoweth as saying.

Chenoweth said that McGehee had a knife, and the younger man fired the "weapon he was holding striking James multiple times resulting in his death," according to the report.

The Arkansas State Police opened an investigation into the killings and the cause of death for the three victims has not yet been determined, according to Bill Sadler, a spokesman for the agency.

"These are rare so it's something that's going to be shocking every time it happens -- and I mean it is -- especially in a smaller, kind of a close-knit community, it's always going to be a shock," Durrett said.

Sheriff's deputies had been called to the Madison County residence earlier on Tuesday for a complaint against Hunter Chenoweth, according to the prosecutor's report. However, he wasn't there when deputies arrived, the report stated.

After the bodies were discovered, the state police agency then began a statewide search for two vehicles that may have been at the crime scene earlier that day. At 10:10 p.m., troopers spotted a blue Dodge caravan, which matched the description of one of the vehicles, traveling west on Interstate 30 near Benton.

Troopers pulled the van over and Hunter Chenoweth exited the vehicle, armed with a rifle, and "appeared to be provoking Troopers to shoot him," according to the report.

Other state troopers moved in from behind Chenoweth, subduing him with their stun guns and arresting him, according to the prosecutor's preliminary report.

Inside the van was the missing infant, under a year old, and a 25-year-old De Queen woman. The infant was unharmed and was released to the Department of Human Services. The woman, who was driving the van, was questioned and released, according to the state police.

Police also found another vehicle seen at the home the day of the killings, a black Ford F-150 pickup, abandoned in Faulkner County along Interstate 40 close to Mayflower.

It's not the first run-in with the law for Hunter Chenoweth. He was arrested in February 2020 on charges of second-degree domestic battering and third-degree endangering the welfare of a minor. He also was charged in March on a failure-to-appear warrant.