Monte Ne was a magical place, at least in Coin Harvey’s dreams 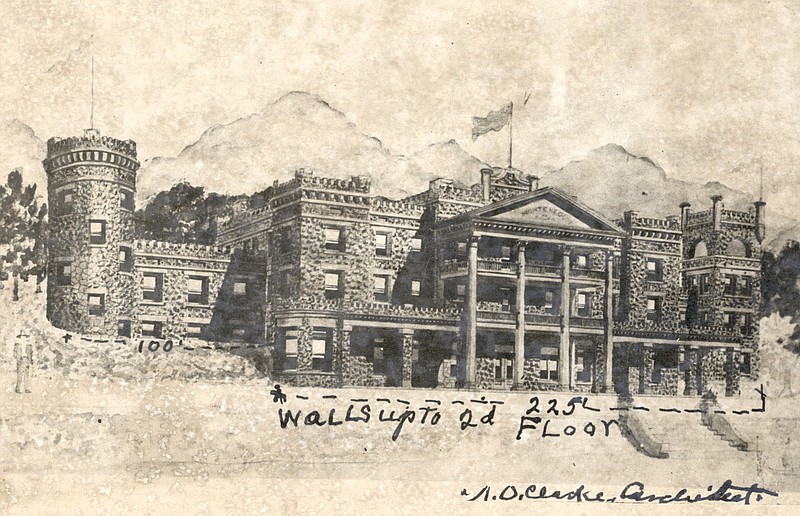 This architectural drawing by A.O. Clarke of the Club House Hotel at Monte Ne shows how it would have looked if finished. It was built up to the first floor, then abandoned due to labor problems. The foundation can still be seen at low water levels. (Courtesy photo/Rogers Historical Museum)

Coin Harvey came to Northwest Arkansas in 1900, bought 320 acres in a lush valley four miles southeast of Rogers and started a fabulous resort which he named Monte Ne, meaning mountain water. He dammed the creek and made a small lake with crystal-clear water that flowed through the valley. His grand plan for the resort included the construction of six large hotels, a bank, a railroad company, a general store, a post office, a newspaper office and an electric power plant.

The first structure Harvey built was the Hotel Monte Ne, overlooking the lake. The hotel was three stories high, had two wings 300 feet long and about 100 rooms. The hotel office, parlor, halls and dining room were illuminated with gas lights. Heat for the office and parlor was provided by large fireplaces, and each guest room had a fireplace. All of the rooms had a doorway to the outside, and the hotel was surrounded with wide porches.

The grand opening of the Hotel Monte Ne on May 4, 1901, was a festive event. A new gasoline launch was brought to the lake and docked in front of the hotel. It was powered by a four horsepower engine and could attain speeds up to four miles per hour. The launch was christened the “Major Blackburn” with a bottle of wine furnished by Carl Starck from his famous vineyard at Monte Ne. A ride around the lake cost each visitor 10 cents.

The festivities included a greased pole contest, where a $5 bill was attached to the top, and youngsters competed by trying to climb the pole to claim it. No one did, but the boy who climbed the highest was awarded $1. The night before the opening, a grand ball was held with and orchestra in the ballroom, and a Victrola phonograph played music outside on the promenade. The hotel was decorated with hundreds of Japanese lanterns, and their reflection in the water made them look doubly numerous. (Rogers Daily News, May 9, 1901)

Always thinking on a grand scale, in 1904 Coin Harvey hired a noted architect from St. Louis, A.O. Clarke, to design five new hotels. Harvey must have been a fantastic salesman, for he persuaded many of the most prominent businessmen in Northwest Arkansas to buy stock in a new company, the Club House Hotel and Cottage Company. William H. Harvey was president, and A.O. Clarke was the architect and superintendent of construction. The plan for the hotels consisted of a central Club House Hotel and four cottage or row hotels made of logs with concrete trim. The row hotels were to be named Arkansas Row, Missouri Row, Texas Row and Louisiana Row, varying in length between 300 and 450 feet.

The Missouri Row Hotel and Club House Hotel were the first buildings designed by Clarke, and construction was started immediately. The Missouri Row and the main Club House Hotel were aligned along the lake west of the Hotel Monte Ne. The Club House Hotel was to be “as palatial as a Roman imperial villa” with an 18-foot-high waterfall in the lobby. The three-story building was to be made of stone and concrete with concrete floors and roof. It was designed so that guests could walk around on the roof and view the scenery from its towers and battlements.

Soon after construction started, trouble arrived in the form of labor problems. In order to save time and money, Harvey changed the work time from 9 to 10 hours per day with no additional pay. In May 1905, a strike by about 30 carpenters and stoneworkers caused a delay in the construction of the two hotels. Harvey was infuriated and fired the strikers. The construction of the Club House Hotel was abandoned, and all of the available workers were used to complete the Missouri Row Hotel. The partially built Club House Hotel was never finished, and even today, parts of the concrete and stone walls stand like a monument between the present day boat ramp and the foundation of the Missouri Row.

The Missouri Row was completed in September 1905 and was 305 feet long. The log structure used 8,000 hand-hewn logs and 14,000 cubic feet of concrete. Each room was 16-feet square or larger with the heaviest of iron and brass bedsteads and the best, most expensive mattresses. The hotel had 40 rooms that were arranged back to back so that one fireplace was placed in a common corner of four rooms with an opening in each room. These solid concrete fireplaces, each with four openings, were lined up down the center of the hotel and can still be seen today in the ruins of the foundation, which is almost always above the water of Beaver Lake. Cannon balls and shells from the Pea Ridge battlefield were sunk in the concrete on each side of the front doors to enhance the entrance to the hotel.

When the Missouri Row opened, it was filled to capacity the first few years and stayed open the year around. Later, it was open just during the summer season. The rate for a room with meals was $2 per day or $10 per week. For a little more money, rooms were available with a private bath.

When Coin Harvey built the Oklahoma Row Hotel, the resort at Monte Ne was almost complete. He had already built the Hotel Monte Ne, built the first heated swimming pool in Arkansas, brought the railroad to his resort and built the depot, and brought a genuine gondola from Italy for private romantic rides on his man-made lake. There was a bank, bowling alley, pool room, large auditorium, fish-stocked lake and the first golf course in Northwest Arkansas. In 1907, Harvey, with the financial help of 300 stockholders, built his third and last luxury hotel at Monte Ne. It was also designed by A.O. Clarke and was the largest log hotel in the world, longer than a football field. It was constructed with 6,000 logs, 40,000 cubic feet of concrete, and a red clay tile roof. Oklahoma Row had 600 linear feet of porches and was distinguished by a three-story concrete tower on the south end overlooking the lake. The hotel had 40 rooms, each with a fireplace, indoor bathroom and running water. The construction was very similar to Missouri Row, except that there was a three-story concrete and stone tower at the south end. (The tower and foundation are still there.) The tower offered a spectacular view of the valley, with the train station and Big Spring — a 10,000-gallon-per-minute spring that fed the lagoon or lake — across the lake.

So what happened to these grand hotels after the resort failed? The resort had been declining since about 1914, but the Great Depression of 1929 was the last nail in its coffin. In 1922, Harvey sold the Hotel Monte Ne to Dr. W.A. Moore. During the early years, the name changed several times to the White House Hotel and the Randola Inn. In March 1925, the property was sold to R.H. Whitlow, who changed the name to the Hotel Frances, after his daughter. In 1930, the Whitlow estate made major expansions and improvements and re-opened as Sleepy Valley Hotel; however, the name was soon changed back to the Hotel Frances. The hotel continued along for many years and was a lodge at the time it was removed for Beaver Lake in the early 1960s. The only sign that remains is a pile of rubble beside the boat ramp.

In 1927, Coin Harvey was in financial trouble, so he sold the Missouri Row and Oklahoma Row hotels to Dan Evans, who used the acquisition to start the Ozark Industrial College and School of Theology, a nonsectarian vocational school. The school closed in 1932 during the Great Depression due to financial problems.

In 1945, Iris Armstrong, the owner and founder of Camp Joyzelle in Monte Ne, bought the Oklahoma Row and Missouri Row hotels so that visitors would have a place to stay close to her girls’ camp. Camp Joyzelle was a summer camp for well-to-do girls from Arkansas and surrounding states. She kept the hotels open for several years, and during this time, most of Missouri Row burned, leaving only the center section.

By 1955, Oklahoma Row had been vacant for several years and was badly deteriorated. A Springdale antique dealer, Dallas Barrack, bought the hotel for $15,000 on Oct. 21, 1955, and renovated it to its former splendor for his Palace Art Gallery. The three-story tower was remodeled into living quarters for the managers of the gallery.

When the hotel was condemned for the creation of Beaver Lake in the early 1960s, the building was auctioned to J.G. Gladden, who moved most of it up the hill just past the Monte Ne Inn Restaurant, where it still stands today. The tower, foundation and underground rooms still exist on the bank of Beaver Lake.