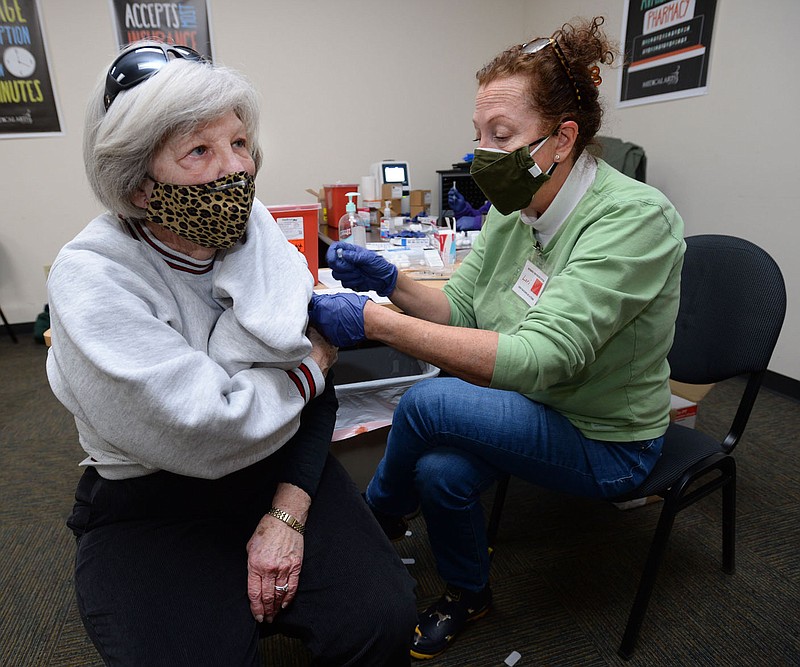 Lori Mahler (right) of Fayetteville administers a second dose of the covid-19 vaccine for Joyce Roberts of Springdale at Medical Arts Pharmacy in Fayetteville on Tuesday, Feb. 16, 2021. Mahler is one of several retired nurses in a group called Nurses Crushing Covid who are volunteering to administer vaccinations. Visit nwaonline.com/210217Daily/ for other photos from Feb. 16. (NWA Democrat-Gazette/Andy Shupe)

The Northwest Arkansas Council, a nonprofit organization comprised of the region's largest health care organizations and businesses, plans to give 3,000 shots to people from 8 a.m. to 4 p.m. Friday at J.B. Hunt Transport Services, in Lowell, said Nate Green, spokesman for the council.

The event is for Benton County residents 70 and older because the Arkansas Department of Health advised the council Benton County is lagging behind in vaccinating that population. People who work in schools or day care centers and people 70 and older became eligible to receive the vaccines in January. Health care workers, some first responders, nursing home staff and nursing home residents became eligible in December.

John Vinson, executive director of Arkansas Pharmacists Association, said the number of doses allocated to pharmacies is based on counties' total population. However, some counties have a higher percentage of people who are 70 or older and the vaccine allocation doesn't account for that, which has helped create long waitlists for the vaccine in those counties, he said.

Bella Vista in north Benton County is largely a retirement community and has a higher percentage of residents who are 70 or older compared to other cities. The Northwest Arkansas Council, along with the several organizations it's working with to host the event, worked with Bella Vista to help get residents signed up, Green said.

The council also worked with the University of Arkansas for Medical Sciences Northwest Regional Campus and Community Clinic to target the Marshallese and Latinx communities, he said.

The council also wants to use the event to develop an "overall Northwest Arkansas playbook" in getting the region's residents vaccinated, Ryan Cook of the Northwest Arkansas Council said Wednesday during a Fayetteville Board of Health meeting. The intent is for the council to again receive vaccines to give to the community as the state allows more groups of people to get vaccinated, he said.

The council will provide second doses in March to people who receive their first dose at Friday's event, Green said. The Moderna and the Pfizer vaccines being used in Arkansas are approved by the federal government. The Pfizer vaccine is approved for people 16 and older while the Moderna vaccine is approved for people 18 and older. Both vaccines require two doses. The council will offer the Moderna vaccine.

About 23,130 residents in Benton and Washington counties were fully vaccinated against covid-19, while another 43,414 had received the first dose as of Tuesday, according to the Arkansas Department of Health.

The two counties have a combined population of 384,234 residents 16 and older, so about 6% of that group have been fully vaccinated while about 11% are halfway there.

The number of vaccine doses delivered to pharmacies statewide has increased from about 37,000 doses a week to about 71,000 a week over the past month, Vinson said. The data does not include Walgreens and CVS, which are obtaining vaccines through a federal program.

Vinson said it's beneficial to provide vaccines in a variety of ways, including mass vaccination events, which he said are efficient at quickly vaccinating large numbers of people. Some people, however, are more comfortable getting vaccinated at their usual pharmacy or doctor's office where they are familiar with the staff and can ask questions.

About 280 of approximately 700 pharmacies in the state that can perform vaccinations have vaccines, and primary care clinics generally do not have them yet. Vinson looks forward to when any health care provider or pharmacy that wants the vaccine can get it, he said.

Mercy Health System also announced Wednesday that it will allow anyone to sign up for vaccinations. Mercy will schedule vaccine appointments for those who are eligible or contact patients for appointments once they are eligible. Patients may sign up at Mercy.net/GetVaccineNWA or by calling (833) 364-6777.

Northwest Health System plans to give 1,400 shots to anyone 65 or older at an appointment-only vaccine event Friday at the Jones Center in Springdale, said Aimee Morrell, spokeswoman for the system. Northwest Health will also provide 600 shots to Springdale school staff on Thursday.

Washington County had 383 active covid-19 cases as of Wednesday, and Benton County had 487. Active cases are those that have not recovered or died.