State virus cases up by 803; hospitalizations lowest since Oct. 3 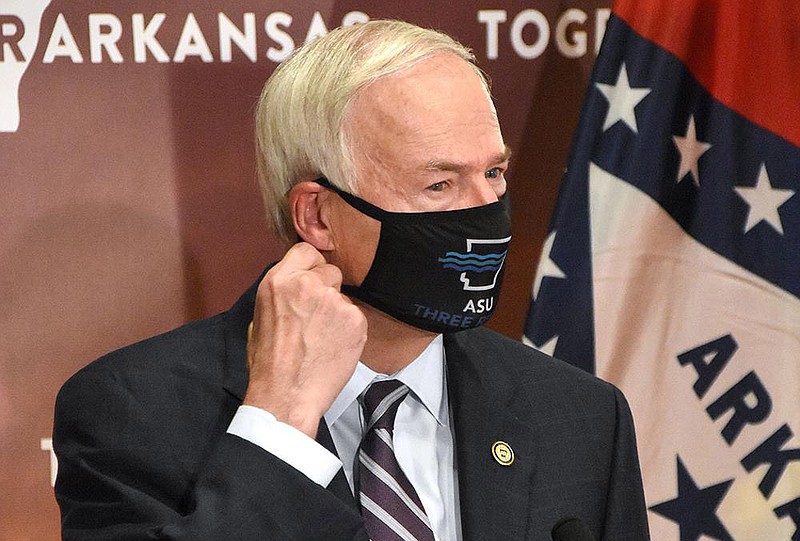 Arkansas' count of coronavirus cases rose Wednesday by 803 -- the second daily increase in a row that was bigger than the one a week earlier, when testing in the state was slowed by winter weather.

Meanwhile, the number of patients hospitalized in the state with covid-19 fell by 49, dropping below 500 for the first time since Oct. 3.

The state's death toll from the virus, as tracked by the Department of Health, rose by 10, to 5,387.

"We have fewer than 500 people in the hospital, which is very good news to me," state Epidemiologist Jennifer Dillaha said.

In a statement on the day's numbers, Gov. Asa Hutchinson also referred to the 496 patients who were hospitalized as of Wednesday, noting that it was "a decrease of over 50% since this time last month."

Dillaha also said state officials could learn as early as Sunday evening how many doses Arkansas will get of the vaccine developed by Johnson & Johnson if the vaccine is issued an emergency use authorization by the U.S. Food and Drug Administration.

An advisory panel to the agency is expected to recommend Friday whether to issue an emergency use authorization for the vaccine.

Dillaha said the state could receive its first doses as early as the end of next week.

"I think it will have a really nice impact simply by the virtue of the fact that it will bring in more doses to the state, which we certainly need, and it will give us a little bit more flexibility about how we can distribute the vaccine around the state because it can be refrigerated and it will likely be authorized as a one-dose vaccine," Dillaha said.

That's in contrast to the vaccine developed by Pfizer and BioNTech, and the Moderna vaccine, which must be kept frozen and are administered with two shots, spaced weeks apart.

She said state officials haven't yet decided how the Johnson & Johnson vaccine will be distributed.

"We're waiting on the FDA's authorization and the subsequent recommendations by the [U.S. Centers for Disease Control and Prevention's] Advisory Committee on Immunization Practices," Dillaha said.

"They may make recommendations for its use for perhaps certain populations or age groups. We don't know yet."

Also Wednesday, a state official said significant numbers of workers at the state's human development centers, which house people with severe developmental disabilities, have balked at being vaccinated.

Development center liaison Tammy Benbrook told the Board of Developmental Disabilities Services, which oversees the centers, that some workers have said taking the vaccine is against their religion or shared fears about its effects.

It's the "same reason they won't get the flu shot," said Benbrook, an assistant director with the Department of Human Services' Division of Developmental Disabilities Services.

"Some people will just not get the vaccine."

Despite the decline in hospitalizations, the number of the state's virus patients who were on ventilators and intensive care units both rose Wednesday after falling a day earlier.

The number who were on ventilators rose by one, to 100.

The number of virus patients in intensive care as of 2 p.m. rose by seven, to 212.

Dillaha attributed the continued decline in the number of patients hospitalized with the virus to the largely downward trend in new infections in the state since early January, when the average daily case increases topped 3,000 and the number of hospitalized virus patients rose above 1,300.

She said the state's vaccination efforts could also be playing a role.

"I suspect we are starting to see some effect on that, particularly those persons living in long-term care," Dillaha said.

She said the vaccines may also be reducing deaths from the virus, with the number reported falling from an average of more than 38 per day in January to 22 per day so far this month.

During the seven-day span ending Wednesday, an average of 11 virus deaths per day were reported.

"That's something we would like to analyze further to get some better data on, but I think we are starting to see an effect," Dillaha said.

She said it was "hard to interpret" the state's increase in cases, noting that the more than 7,600 test results that were reported to the Health Department was a larger number than had been reported in the previous few days.

"That tells us that the laboratories are probably working through their backlog, as well as the people who didn't get tested earlier that are coming in to get tested now that will show up also in the increase in numbers," Dillaha said.

She said she expects to see "some catch-up" in testing over the next few days, "and then we'll see what the trend is."

The five human development centers -- in Arkadelphia, Booneville, Conway, Jonesboro and Warren -- house more than 800 people with developmental and other disabilities.

They saw hundreds of covid-19 cases among residents and workers in recent months.

In contrast to the reluctance among workers, more than 90% of residents are now fully vaccinated at the Booneville, Arkadelphia and Warren centers.

The center with the smallest slice of vaccinated residents -- Conway, at 81% -- serves children, who aren't yet eligible for the shots.

Staff vaccinations matter because it isn't clear to scientists if vaccinated individuals can still catch covid-19 and spread it to people without immunity.

State officials are deploying several strategies to encourage reluctant workers to get the shots.

Campus town hall meetings with administrators and Health Department staffers discussed the vaccine, and "influential, well-trusted and well-liked" staff members who have been vaccinated were enlisted to talk to co-workers, officials said Wednesday.

A flyer for workers aimed to debunk misconceptions about the vaccines. The flyers include such information as the inoculations weren't developed using fetal tissue, won't change the recipient's DNA and won't cause infertility.

Thus far, the Arkadelphia center has vaccinated about 60% of its employees, the highest percentage. Numbers were much lower at centers in Booneville, Warren and Conway, which vaccinated from 34% (Conway) to 38% (Booneville) of their staffs.

Campus raffles for a $50 gift card for employees who agreed to be vaccinated "did not seem to help" with resistance, Division of Developmental Disabilities Services Director Melissa Stone said during the meeting, held via conference call.

At the Conway Human Development Center -- the largest center, which has hundreds of employees -- workers can fill out cards explaining their reasoning for taking the vaccine in hopes of encouraging their counterparts.

A day after Hutchinson expanded eligibility for the vaccines to Arkansans age 65-69, some pharmacists had already started giving shots to patients in that age group, while others were still working through waiting lists of patients who signed up earlier, said John Vinson, chief executive of the Arkansas Pharmacists Association.

Pharmacists were also working to get caught up on shots that were delayed because of last week's storms, with some holding extra vaccination days or extending their hours.

Compared with Jan. 18, when the state expanded eligibility for the shots to Arkansans age 70 and older and employees of schools and child care centers, the expansion announced Tuesday should be more manageable, he said.

That's because the number of newly eligible people -- estimated to be about 115,000 -- is smaller, and the flow of vaccine doses coming into the state is larger.

"The phone calls still were crazy on Tuesday, and they're going to be every single time we open a new phase, but I don't think that the phones will stay on meltdown" for more than about a week, he said.

"Within a week we'll be able to get most patients that are eligible scheduled," although it could take longer in areas with large retiree populations, he said.

According to the CDC, Arkansas is expected to get enough vaccine next week to provide initial doses of the Moderna and Pfizer vaccines to 62,830 people, up from 58,150 this week.

Those doses are in addition to more than 18,000 a week being shipped to Walmart and certain pharmacies under a federal program.

Mercy Northwest Arkansas in Rogers on Wednesday announced that it had opened sign-ups for the vaccine "to anyone in the community who is interested in receiving" it.

Outside of special vaccination clinics, hospital spokeswoman Jennifer Cook said the hospital had previously focused on patients it identified through medical records as being eligible.

"I think the difference is, people have been signing up and we're advertising that this sign-up is available," Cook said.

People can sign up by visiting mercy.net/getvaccinenwa or calling (833) 364-6777. Cook said people who aren't yet eligible can still sign up, and the hospital will contact them to schedule appointments once they are.

The Central Arkansas Veterans Healthcare System, which is following a different vaccine plan from the state's, announced Wednesday that it has extended eligibility to veterans who are 65 and older, those younger than 65 with underlying medical conditions, and veterans employed as "essential frontline workers," such as firefighters, police officers, postal workers, and those working in factories and grocery stores.

Veterans 70 and older and those on dialysis, undergoing chemotherapy, with spinal cord injuries or who have had transplants, are homeless or are in congregate living settings are also eligible.

The Veterans Health Care System of the Ozarks began offering the vaccine to veterans 65 and older at its Fayetteville campus on Feb. 10, spokeswoman Crystal Davis said.

The system is vaccinating people 75 and older at its community-based outpatient clinics.

"A VHSO staff member will contact each enrolled Veteran when it is time to schedule his/her vaccination," Davis said in an email.

"Our ultimate goal is to offer it to all Veterans who want to be vaccinated."

According to the Health Department, pharmacies and other providers participating in the vaccination effort coordinated by the state had received 816,730 doses as of Wednesday morning, up by 22,500 from the total as of a day earlier.

In addition, the Health Department said Walmart, Walgreens, CVS and pharmacies belonging to the Community Pharmacy Enhanced Services Network had administered 35,559 doses that were allotted through federal programs.

That was an increase of 1,994 doses from the total as of a day earlier.

Walgreens and CVS were allocated 49,400 doses of the Moderna vaccine for residents and workers in Arkansas long-term-care facilities as part of a federal program.

Walmart was allocated 11,600 doses for vaccinations that began Feb. 13 at 58 stores as part of a different federal program.

The cases that were added to the state's tallies included 459 that were confirmed through PCR tests.

The other 344 were "probable" cases, which include those identified through antigen tests.

The number of cases that were considered active fell by 131, to 4,676, as 924 Arkansans were newly classified as having recovered.

Pulaski County had the largest number of new cases, 105, followed by Benton County with 78, Washington County with 49, Garland County with 35, and Faulkner and Saline counties, each with 33.

Among prison and jail inmates, the Health Department's count of cases rose by four.

Department of Corrections spokeswoman Cindy Murphy said the number of cases among inmates at the Ouachita River Unit in Malvern rose by four, to 1,564.

Those four were the only ones that were active as of Wednesday.

Among nursing home and assisted living facility residents, the state's count of virus deaths grew by three, to 2,018.

The number of people who have ever been hospitalized in the state with the virus grew by 32, to 14,649.

The number of the state's virus patients who have ever been on a ventilator with the virus rose by four, to 1,509.