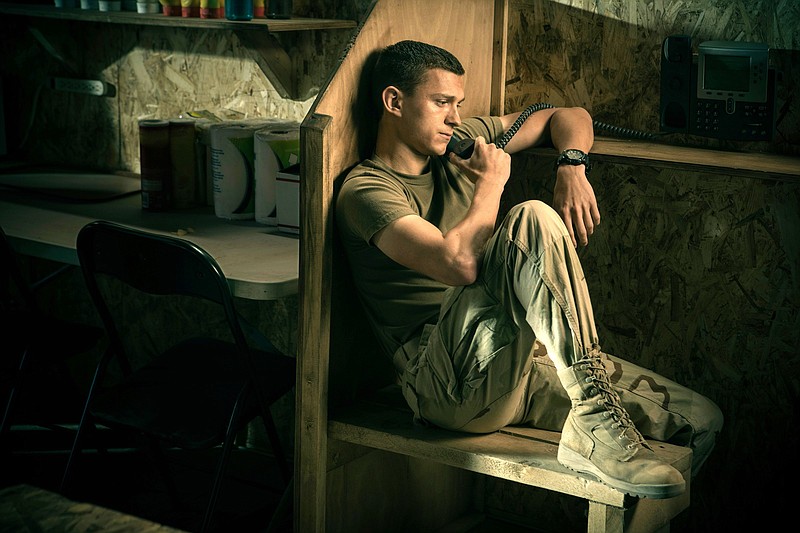 It seems like a few months back, some of my Twitter friends were complaining about movies being too long now. A three-and-a-half-hour flick was just too much, they said. Being a "Lord of the Rings" fan, naturally, I stuck up for longer running times.

In high school, my band director actually had a lock-in at the band room and projected all three "Lord of the Rings" films (extended editions) on the wall for us to enjoy. I survived that. Long films have their place, but "Cherry" has shown me such running times should be rare.

The latest offering from brothers Anthony and Joe Russo restored my faith in the value of movies that don't overstay their welcome.

If you looked at the premise of the film's Wikipedia page before its official release today on Apple TV+, here's what you saw, "An Army medic with PTSD becomes addicted to opioids and starts robbing banks to pay for the addiction."

I didn't watch any trailers for "Cherry," and went in with just that premise. Given that summary, I expected this movie to have some heist elements. But it doesn't. Because Tom Holland's character, Cherry, isn't smart enough to plan out anything other than a very basic bank robbery. I mean, "Fun With Dick and Jane" had a smarter bank robbery scene. Coincidentally, I enjoyed that movie more than this one.

Of course, I'm learning more and more in this job as a movie columnist that just because I dislike a movie doesn't mean it's objectively awful in every way.

"Cherry" offers some really creative cinematography. The Russo brothers really got their hands dirty, making some unique shots all throughout the movie. And that's impressive given that it has a running time of 140 minutes.

Even if the movie seemed to drag (more on that later), there was always an innovative angle for certain shots that would refocus my attention.

The film also features quite a bit of narration, but it's not nearly as consistent as the camera work. Holland narrates in a pretty creative way at the start of the film, even breaking the fourth wall a couple times to address the audience.

Then he goes to Iraq, and there's practically no narration. It comes back a little bit upon his return to civilian life, and then it disappears again toward the end of the movie. The narration doesn't add much other than a chuckle or two at the beginning, and I feel it ultimately serves as nothing more than a confusing element of "Cherry."

Some narration, I like. "Blade Runner" is a good example of that. I liked Harrison Ford's narration in that film (and in "The Call of the Wild").

But Holland's voice isn't great for narration. There's nothing wrong with it. But if you're going to narrate, you need to have a unique voice for it.

Before the movie started, I joked about the irony of Spider-Man being framed for bank robbery in "Spider-Man 3" only to now actually be committing the crime in this film. But Holland lets you know right at the start of this movie he's an entirely different person. There's no quirky innocence in "Cherry." He's not a hero.

He makes a cute couple with his romantic counterpart, Emily, played by Ciara Bravo. They're adorable at the start of the film and have solid chemistry. It makes the rest of their tragic story all the more painful to watch with how far they sink.

The movie essentially follows Cherry's journey from college student, to Army medic in Iraq, to a deep spiral into drugs and robbery driven by post-traumatic stress syndrome upon return to civilian life.

And the best part of the film is his basic training. The drill sergeants were hilarious. My favorite scene in the movie is right after Cherry gets his hair buzzed, and he's sitting in the chair looking at his reflection. Then this drill sergeant comes up behind him and screams, "Do you think you're still pretty?!"

I'm sure basic training is miserable in real life, but I laughed really hard watching Cherry undergo it in this film. It was like all the funny parts of "Major Payne" crammed into a 10-minute section of the film.

But all bets are off when Cherry goes to Iraq. The Russo brothers did a fantastic job of portraying all the horrifying events and experiences that would break Holland's character, leading to his series of awful choices in the second half of the film.

And while "Cherry" doesn't shy away from intensity, it also doesn't linger on misery. You get just enough to know how awful Cherry's experience truly is. There's a scene where Cherry has to help carry burnt corpses out of a military vehicle that had exploded, and ... it's harsh.

When Holland's character returns to America things start to drag.

I imagined this is what "Breaking Bad" would have been like without any likable characters or roller coaster highs (pun intended) in action and drama.

The second half of "Cherry" is just a depressing slog that overstays its welcome. Now and again, I'd appreciate some small details, like Holland constantly twisting his wedding ring or the names of banks he robbed being inaccurate to show the movie has an unreliable narrator.

But Holland could only do so much to keep the plot slogging forward. As the timer on my television got closer to the 140-minute mark, I found myself looking at the oven clock more and more. "Cherry" should've been 90 minutes.

I'd have cut several scenes from the later half. Did I really need to see Cherry or Emily shooting up heroin over and over again? The more I saw them get high, the less of an impact it had on me. It cheapened the experience of their awful situation.

I also found the fact that Holland robbed so many banks without any real plan and kept escaping unlikely. Anytime I see a story about a bank being robbed in Northwest Arkansas, I'll read another story about the suspects being arrested within the next 24-48 hours. They never last long. They ain't John Dillinger.

That Cherry got away so often was an insult to the competence of law enforcement in this film. A drug addict who can't think clearly really shouldn't be able to rob one bank and get away, let alone six or seven.

There's a scene toward the end that really highlights just how much "Cherry" started to drag. And for some reason, opera music is overlaid as if the film has earned this grand artistic ending, when the reality is I just wanted the movie to be over so I could go to bed.

The small details are great, and almost all of them come from Holland or the Russo brothers. I loved that when Cherry couldn't remember someone's name, be it a military recruiter or a doctor at the VA Hospital, their label would simply read "Whomever." Sgt. Whomever or Dr. Whomever. I snickered at that.

"Cherry" has the makings of a good movie, with Holland's top-notch performance, some truly intense moments, and wonderful cinematography. I just wish it had been shorter.