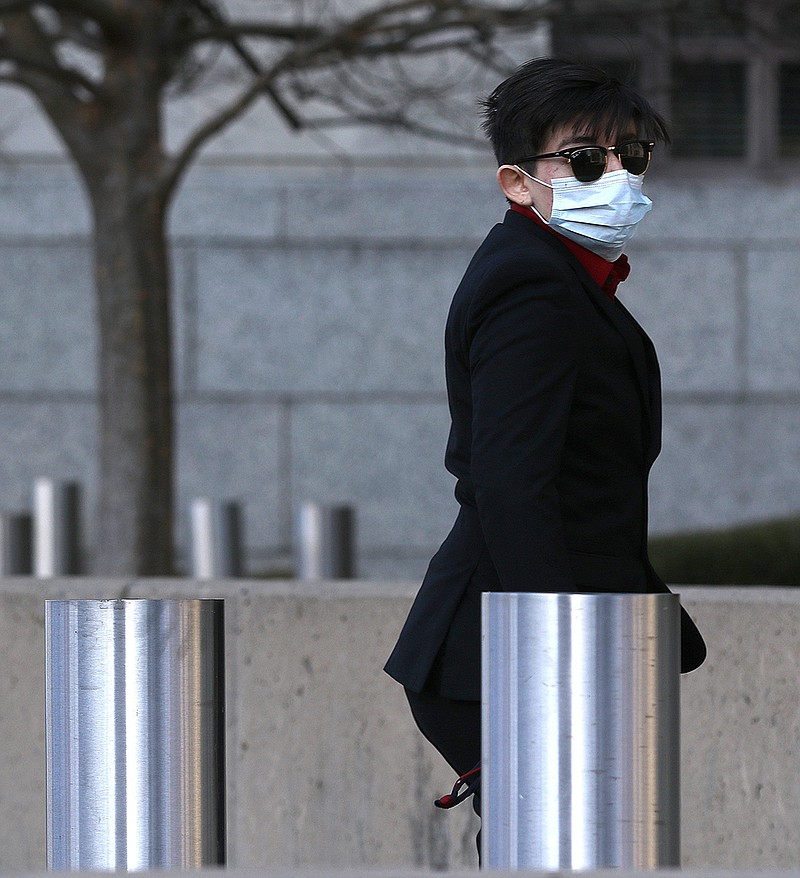 A North Little Rock man indicted in October on federal charges of conspiracy and use of explosive materials for malicious damage to federal property was arraigned along with four co-defendants Thursday on charges contained in a new, 13-count indictment handed up by a federal grand jury this month.

The indictment also merged his case with those of Brittany Dawn Jeffrey, 31; Aline Espinosa-Villegas, 24; Renea Goddard, 22; and Emily Nowlin, 27, who were named in a criminal complaint announced by the U.S. attorney's office in December.

Deere noted before beginning the proceeding that Lungaho had submitted to a urinalysis Thursday at the U.S. Probation Office and had tested positive for marijuana.

"As we know, marijuana stays in the system for up to a month," Deere said, "but I need to make sure that he is at himself and competent to move forward with this hearing before we can do anything else."

Lungaho's attorney, Michael Kaiser, assured the judge that he had spoken at length with his client and had not found him to be impaired.

"He appears fully competent and not intoxicated in any way," Kaiser said.

"You are an officer of the court and I'm going to take your assessment as accurate," Deere said.

Kaiser waived formal reading of the charges and entered a plea of not guilty for his client. Lungaho's case was set for trial before Chief U.S. District Judge D. Price Marshall Jr. on Sept. 27 at 9:30 a.m.

Lungaho appeared before U.S. Magistrate Judge Patricia Harris earlier this month after prosecutors sought to revoke his pre-trial release on allegations that he had failed to check in on several occasions and had tested positive for marijuana use. Harris did not revoke his release but ordered him to remain on home detention and to begin wearing an electronic ankle monitor. Harris warned him that continued drug use could land him in jail awaiting trial.

Deere did not address Thursday's positive drug test other than to say the matter could come up later.

"Judge Harris released you on your own recognizance and I'm not sure what she is going to do about the positive marijuana test," Deere said. "I'm sure that is not going to please her, but I will leave that for another day since there is no petition to revoke pre-trial release."

All five are accused in connection with damage inflicted on public property, including slashing tires, firebombing and attempting to firebomb police cars, that occurred during protests last summer and into the fall in the wake of the death of George Floyd at the hands of Minneapolis police. Floyd's killing touched off protests around the country that continued for months and have led some police departments to examine their use-of-force policies.

For each of the five, conviction of the most serious charge, possession of a destructive device in furtherance of a crime of violence, could result in a sentence ranging from 30 years to life in prison and a fine of up to $250,000. Possible sentences for the other charges range from five to 20 years in prison and fines up to $250,000.

The four were given a trial date of March 29 before Marshall, but Deere told them a delay is likely. All four women originally appeared before U.S. Magistrate Judge Joe Volpe in December, who ordered all but Espinosa-Villegas released. Espinosa-Villegas was released the following month. Volpe warned them all that violations of the conditions of their pre-trial release could land them in jail awaiting trial, a wait he said could be as long as three years.

"Nobody wants that," Volpe told each of them at the time.

Espinosa-Villegas, accompanied by her attorney, David Parker, also tested positive for marijuana use, prompting another warning from the judge Thursday, but was allowed to proceed with the hearing, and Deere did not order her detained.

"If the government wants to revoke your bond based on a positive drug test, they can file that with Judge Volpe," Deere said. "It's important that you abide by all conditions of release so that you don't wind up getting revoked and sitting in jail, because this case likely is not going in March."

Deere warned that even a valid medical marijuana card issued by the state would not prevent a revocation.

"Marijuana is still illegal under federal law," she said. "For now."

Parker also stood in as Goddard's counsel for the hearing after her lawyer, Dominique King, did not appear.