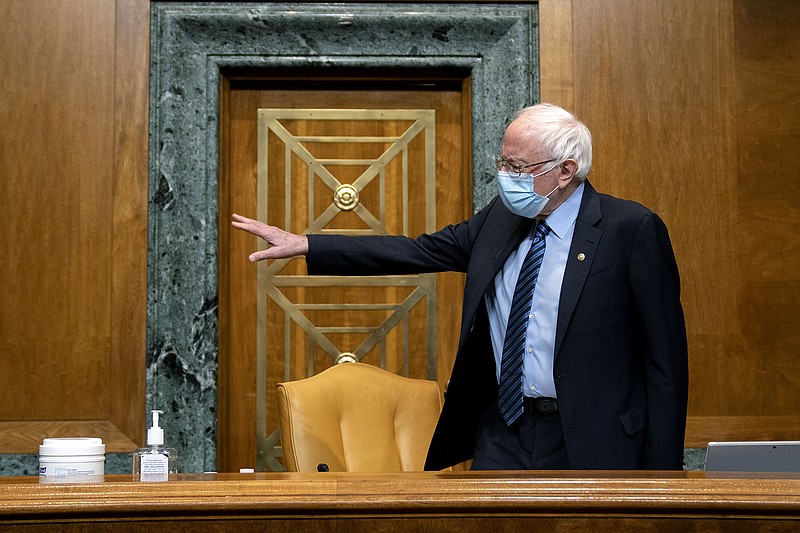 WASHINGTON -- The Senate parliamentarian has dealt a potentially lethal blow to Democrats' drive to raise the minimum wage, deciding that the progressive goal must fall from a covid-19 relief bill the party is trying to speed through Congress, Democratic Senate aides said Thursday.

The finding by Elizabeth MacDonough, the chamber's nonpartisan arbiter of its rules, comes as Democrats prepare for House approval today of an initial version of the $1.9 trillion package that still includes the minimum wage boost.

It will force Democrats to make politically painful choices about what to do next on the federal minimum wage, which has long caused internal party rifts.

The Senate aides confirmed the parliamentarian's decision on condition of anonymity because it hadn't yet been released.

Progressives seeking to maximize Democratic control of the White House and Congress have wanted party leaders to push aggressively on the issue. The proposal would gradually raise the minimum wage to $15 over five years, well above the $7.25 in effect since 2009.

[Video not showing up above? Click here to watch » https://www.youtube.com/watch?v=iYrkvvxEsfo]

But Democratic Sens. Joe Manchin of West Virginia and Kyrsten Sinema of Arizona have voiced opposition to including the minimum wage increase in the relief bill, and other moderates also have expressed concerns.

That suggests Democrats could well lack the strength they need for it to survive. Democrats control the 50-50 Senate with Vice President Kamala Harris' tiebreaking vote and can't lose any of their senators to prevail. Republicans solidly oppose the boost to $15.

Democrats had been anxiously awaiting MacDonough's decision, but their next steps are not clear. Her ruling pertains only to the Senate, where the legislation will move forward under complex rules that prohibit certain items that don't have a particular impact on the budget. MacDonough determined that the minimum wage increase did not pass that test -- an outcome that had been predicted by a number of Democrats, including Biden himself.

The House is moving forward Friday to pass the legislation and send it to the Senate. House Speaker Nancy Pelosi has committed to keeping the minimum wage increase in the bill. If she does, Majority Leader Charles Schumer, D-N.Y., will then face a decision on whether to take out the plank or try to keep it in the bill.

Schumer has not said what he will do. Liberals are pushing him and the Biden administration to try to overrule the parliamentarian's decision, which Democrats could theoretically attempt to do on the Senate floor. But White House chief of staff Ron Klain has publicly ruled out that approach.

"Certainly, that's not something we would do," he told MSNBC host Joy Reid. "We're going to honor the rules of the Senate and work within that system to get this bill passed."

Democrats would not likely command the necessary votes to succeed anyway, since at least one Senate Democrat -- Manchin -- has said he would not vote to overrule the parliamentarian.

Democrats have said they could still pursue a minimum wage boost in free-standing legislation or attach it to legislation expected later this year that is to be aimed at a massive infrastructure program, another Biden priority.

But they'd still face the challenge of garnering 60 Senate votes, a hurdle that has upended Democratic attempts to boost the minimum wage for more than a decade.

The House has advanced stand-alone minimum wage increase bills in the past, but it's highly unlikely the Senate would agree to any such legislation -- at least not at the level that liberals support.

Nevertheless, Pelosi said Thursday that Democrats were committed to trying. It's been over a decade since the federal minimum wage was last raised, although individual states have acted to raise theirs.

One possibility is trying to find compromise at a lower level -- Manchin has endorsed $11 an hour -- and trying another way to get it in the bill. For example, Democrats could pass Biden's relief bill through the Senate without the minimum wage included, and then try to put a different version of it back in and persuade the parliamentarian it should stay.

Several liberal Senate Democrats said Thursday that they need to do whatever it takes -- up to and including eliminating the filibuster, the 60-vote rule that gives the minority party enormous sway in the Senate.

Republicans solidly oppose the $15 minimum wage target as an expense that would hurt businesses and cost jobs. They also oppose the overall relief bill, saying it's too expensive, not targeted enough at people and businesses that most need it, and is really a grab bag of gifts for Democratic allies.

The overall relief bill is Biden's first legislative priority. It is aimed at combating the year-old pandemic that's stalled much of the economy, killed half a million Americans and reshaped the daily lives of virtually everyone.

The pandemic relief legislation would provide millions of people with $1,400 direct payments. It contains billions of dollars for vaccines and covid-19 testing, schools, state and local governments, the ailing restaurant and airline industries and emergency jobless benefits, while providing tax breaks to lower earners and families with children.

Democrats are pushing the $1.9 trillion measure through Congress under special rules that will let them avoid a Senate filibuster by Republicans, a tactic that Democrats would need an unattainable 60 votes to defeat.

But those same Senate rules prohibit provisions with only an "incidental" impact on the federal budget because they are chiefly driven by other policy purposes. The parliamentarian decides if provisions pass that test.

Information for this article was contributed by Alan Fram of The Associated Press; and by Erica Werner of The Washington Post.