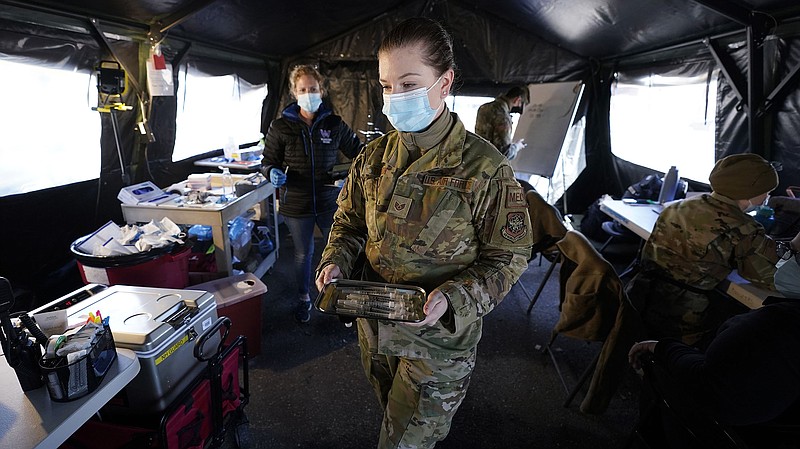 Megan Turgeon, of the New Hampshire National Guard, carries a tray of syringes loaded with the Pfizer COVID-19 vaccine at a clinic set up by the New Hampshire National Guard in the parking lot of Exeter, N.H., High School, Thursday, Feb. 25, 2021, in Exeter. The temporary facility, operating out of a field hospital tent, administers both the Moderna and Pfizer COVID-19 vaccines. (AP Photo/Charles Krupa)

A real-world test of Pfizer's covid-19 vaccine in more than half a million people confirms that it's very effective at preventing serious illness or death, even after one dose.

Wednesday's published results, from a mass vaccination campaign in Israel, give strong reassurance that the benefits seen in smaller, limited testing persisted when the vaccine was used much more widely in a general population with various ages and health conditions.

The vaccine was 92% effective at preventing severe disease after two shots and 62% after one. Its estimated effectiveness for preventing death was 72% two to three weeks after the first shot, a rate that may improve as immunity builds over time.

It seemed as effective in people older than 70 as in younger people.

"This is immensely reassuring ... better than I would have guessed," said the Mayo Clinic's Dr. Gregory Poland.

Vanderbilt University's Dr. Buddy Creech agreed: "Even after one dose we can see very high effectiveness in prevention of death," he said.

Neither doctor had a role in the Israel study, but both are involved in other coronavirus vaccine work.

Both doctors also said the new results may boost consideration of delaying the second shot, as the United Kingdom is trying, or giving one dose instead of two to people who have already had covid-19, as France is doing, to stretch limited supplies.

[Video not showing up above? Click here to watch » https://www.youtube.com/watch?v=X2p8fF_-opg]

The vaccine, made by Pfizer and its German partner BioNTech, is given as two shots three weeks apart in most countries.

The study was led by researchers from the Clalit Research Institute and Ben-Gurion University of the Negev in Israel along with Harvard University in the U.S. It did not report on vaccine safety, but no unexpected problems arose in previous testing.

Researchers compared nearly 600,000 people 16 and older in Israel's largest health care organization who were given shots in December or January with an equal number of people of similar age, sex and health who did not receive vaccine. None of the participants had previously tested positive for the virus.

The vaccine was estimated to be 57% effective at preventing any symptoms of covid-19 two to three weeks after the first dose, and 94% a week or more after the second dose.

Effectiveness was 74% after one shot and 87% after two for preventing hospitalization, and 46% and 92% for preventing confirmed infection. Reducing infections gives hope that the vaccine may curb spread of the virus, but this type of study can't determine if that's the case.

There were 41 covid-19-related deaths, 32 of them in people who did not get vaccinated.

Overall, the numbers compare well to the 95% effectiveness after two doses that was seen in the limited testing that led U.S. regulators to authorize the vaccine's emergency use, Poland said. How much benefit there would be from one dose has been a big question, "and now there's some data" to help inform the debate, he added.

"Maybe the right thing to do here to protect the most number of people ... is to give everybody one dose as soon as you can. I think that's a very acceptable strategy to consider," Poland said.

Israel now has vaccinated nearly half its population. A newer variant of the virus that was first identified in the United Kingdom became the dominant strain in Israel during the study, so the results also give some insight into how well the vaccine performs against it.

Earlier this week, two U.K. studies suggested benefits even after one dose of the Pfizer vaccine or a different one from AstraZeneca. The U.K. is delaying the second shot for up to 12 weeks to try to give more people some level of protection.

On Thursday, President Joe Biden marked the administration of the 50 millionth dose of covid-19 vaccine since his swearing-in. The moment came days after the nation reached the milestone of 500,000 coronavirus deaths and ahead of a meeting with the nation's governors on plans to speed the distribution even further.

"The more people get vaccinated, the faster we're going to beat this pandemic," Biden said at the White House ceremony, noting that his administration is on course to exceed his promise to deliver 100 million shots in his first 100 days in office.

All told, more than 45 million Americans have been administered at least one dose of the approved vaccines from Pfizer and Moderna since they received approval from the Food and Drug Administration in December, with more than 20 million receiving both required doses.

As part of the ceremony, four frontline workers -- a pair of emergency medical technicians, a school counselor and a grocery store worker -- received vaccine doses on live television, part of the White House's efforts to build confidence in the vaccination program.

Biden predicts that by late spring there will be enough vaccine to administer to anyone who wants it, but that hesitance of the vaccine will limit the number of people who want it. "We'll have the vaccine waiting," Biden said, predicting that point could come within 60 to 90 days.

He promised a "massive campaign to educate people" about the safety and efficacy of the shots, in hopes of stimulating demand as the nation aims to vaccinate about 80% of adults to reach herd immunity and end the pandemic.

A public service ad campaign was unveiled Thursday that aims to persuade Americans to get vaccinated against covid-19, telling them "It's Up to You."

The campaign by the Ad Council and its partners is focused on those who may be hesitant to get the shots. One print ad reads: "Getting back to hugs starts with getting informed," and directs readers to a website with information about vaccines in seven languages.

"Our goal is to move them from being hesitant to being confident" in vaccines, said Lisa Sherman, the Ad Council's president.

The large, national campaign is producing an array of English and Spanish ads for TV, billboards, bus shelters, social media and publications that will be rolled out over the next few months. A few of the ads are expected to feature celebrities like the actors Angela Bassett and John Leguizamo, CNN's Dr. Sanjay Gupta, and the government's top infectious disease expert, Dr. Anthony Fauci.

Biden also noted the promise of a third vaccine receiving approval as soon as this weekend, as Johnson & Johnson's single-dose candidate undergoes review by the FDA.

"We have a plan to roll it out as quickly as Johnson & Johnson can make it," Biden said.

Meanwhile, the U.S. has seen a dramatic turnaround since December and January, when hospitals were teeming with patients after holiday gatherings and pandemic fatigue caused a surge in cases and deaths.

Health officials acknowledge the improvement but point out that hospitalizations are still at about the same level as earlier peaks in April and July and right before the crisis worsened in November. Deaths are still persistently high, though much lower than the peak in early January, when they sometimes exceeded 4,000 per day.

Hospitalizations in Missouri were hovering around 3,000 a day during a stretch from late November into January but have since fallen about 60%. As of Monday, 1,202 people were hospitalized, according to state data.

In Wisconsin, hospitalizations dropped dramatically over the past three and a half months, from a high of 2,277 patients on Nov. 17 to 355 on Wednesday, according to the Wisconsin Hospital Association. And the patients who are hospitalized are not as sick. The number of patients in intensive care has dropped 81% since Nov. 16.

State health officials on Feb. 15 removed all staff from a field hospital set up in October at the state fairgrounds in suburban Milwaukee. They have stopped short of dismantling the facility out of concern that the state could experience a surge in cases sparked by variants of the virus that causes covid-19.

Behind the overall positive trends in hospitalizations are worrisome hints that the worst may not be over, said Ali Mokdad, professor of health metrics sciences at the University of Washington in Seattle.

"In the past week, we're seeing the slowdown of the decline," Mokdad said. In many states, hospitalizations are leveling off or even rising.

The biggest driver in the overall decline in U.S. hospitalizations is people's behavior in December and January, Mokdad said. For the first time in the U.S., the shape of the wave is symmetrical, with the decline as steep as the rise.

"This didn't happen before in the previous two waves," Mokdad said. "For us, in the business, it's like, 'Wow, we are doing something really good right now.'"

In Minnesota, non-intensive-care hospitalizations dropped from around 1,400 in late November to just 233 as of Tuesday. The number of intensive care patients has dropped about 85% since early December to just 59 patients Tuesday, according to state data.

Hospitalizations in Illinois hovered around 6,000 patients for several days in late November but fell to 1,488 by Monday, a decrease of about 75%. The number of patients in intensive care has dropped as well, from 1,224 on Nov. 25 to just 361 on Monday, according to the state health department.

In Kansas, where many rural hospitals lack ventilators, the situation was so dire at one point that patients were being flown hundreds of miles for treatment.

But the number of hospitalizations in the state has dropped nearly 84%, from 1,282 on Dec. 2 to 208 on Sunday, according to the state health department. More than 300 people were in intensive care in December; that's down to just 50 now, state data shows.

Moderna said it's reached $18.4 billion worth of signed agreements for its vaccine in 2021, and Chief Medical Officer Tal Zaks will leave the company in late September.

Moderna has retained a recruiter to find a replacement for Zaks with "global and commercial experience" as it scales up its vaccine and shepherds other products to market over the next few years, the company said Thursday in a fourth-quarter earnings statement.

"Moderna has been changed in a profound way," Chief Executive Officer Stephane Bancel said on a call with investors. "Tal joined us when we were a clinical company, and now we have our own authorized product."

Zaks has been key to the development of Moderna's shot, which uses genetic material called messenger RNA to turn cells into vaccine factories. The two-dose regimen became the company's first marketed product when regulators granted it an emergency-use authorization in December, and Moderna will seek full approval later this year.

Moderna remains in conversations with governments around the world to supply additional doses.

The vaccine maker aims to deliver as many as 1 billion doses this year, and 1.4 billion doses in 2022. On Wednesday, the company raised the lower end of its 2021 projection from 600 million doses to 700 million.