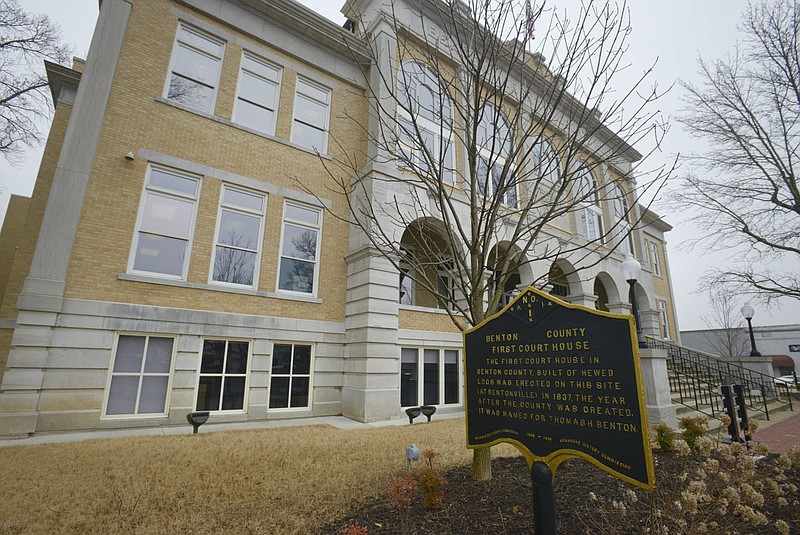 NWA Democrat-Gazette/CHARLIE KAIJO Benton County's special election to vote on building a new court facility begins March 12. If the proposed tax increase passes, the county would spend another $5 million to update the downtown Bentonville courthouse, including the courtroom on the third floor.

Justice of the peace Carrie Perrien Smith, the resolution's sponsor, first brought the item to the Committee of the Whole on Feb. 16 where it was passed on to the Quorum Court by a 11-3 vote. The court is made up of 14 Republicans with one seat vacant.

County Judge Barry Moehring said he was against the resolution and wouldn't sign it if it passed. The county has no jurisdiction in the matter, and other legislative bodies such as city councils in the county also haven't endorsed the issue, he said. The resolution would lead to confusion with guidelines that are in place, he said.

"We need to stay the course," he said.

A few justices of the peace at the Committee of the Whole meeting were uneasy about some of wording -- like 'immediately' -- in the original resolution. Two sections at the end of the document were reworked.

The resolution also acknowledged the need to allow businesses to operate in a way that meets the needs of their business, employees and customers without the burden of covid-19 restrictions. The resolution also mentioned appreciation and recognition of the work, commitment and innovation of the business community to modify practices and increase options helping their customers stay healthy.

Justice of the Peace Leigh Nogy, who voted for the resolution, said the voices of small-business owners needed to be heard.

Smith, who said she's a longtime advocate for small business, also previously noted the pandemic has been going on for 11 months and customers and employers have learned the precautions they need to take to protect themselves. Also, the vaccine rollout is underway and a significant part of the population has tested positive for covid-19, she said.

The statement noted small businesses are integral to the economy and the community and offered support of all opportunities that help small business operate profitably.

"While the spirit of the proposed resolution is well intended, the leadership of our Mayors, of Governor Hutchinson, and of the ADH has given clear direction and built consensus," according to the statement. "Continuing to follow this leadership is prudent and presents the proper path forward. We stand committed to serving small businesses and will continue to advocate for them through the proper channels of jurisdiction."

This story has been updated with a list of who voted for and against the resolution.

• Approved the appointment of Theresa Neal to the Planning Board. She will replace Justice of the Peace Ron Homeyer, who resigned from the board in December to serve on the Quorum Court. He ran unopposed in November and represents District 12.

• Declared a vacancy in District 10. Justice of the Peace Renona Crowden announced her resignation because she moved out of the county. The district covers the west side of Bella Vista.

• Heard a third and final reading of a proposed ordinance to amend the county planning code.

This story was originally published at 7:46 a.m.