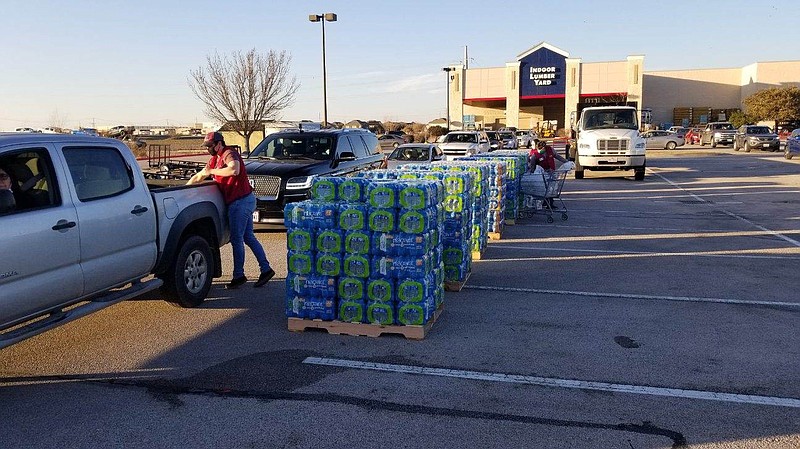 Lowes will be providing water today and Saturday, from 10 a.m. until 2 p.m. in the Lowe’s parking lot located at 2906A E. Harding in Pine Bluff, while supplies last. (Special to the Commercial)

There are blessings in every struggle, and as Jefferson County is dealing with the aftermath of a winter storm that caused much turmoil for the community, the hearts of many are responding with generous acts of kindness to help those in need.

Conswellyn Chambers, Lowe's district manager, whose home base is in Jacksonville, said she knew her employees in Pine Bluff were affected by the storm and its aftermath. And though the company has been providing for its staff and various other entities since Friday, she said she wanted to do more.

Lowe's officials said they wanted to broaden the range because the need for water was greater as Liberty Utilities has not been able to give a definite time by which the water issues will be fixed.

Chambers said she partnered with her regional team and as a result, two truckloads of bottled water were soon on their way to Pine Bluff.

"If there is a possibility that the community may go to boil and knowing that a lot of community residents are out of water-- we wanted to do this giveaway," said Chambers.

The donations will be provided today and Saturday, from 10 a.m. until 2 p.m. in the Lowe's parking lot located at 2906A E. Harding in Pine Bluff, while supplies last.

The Jefferson County sheriff's office will participate in the distribution efforts.

"We are honored to partner with Lowe's and assist with giving back and making a difference in our local community," said Sheriff Lafayette Woods Jr. "The support from our business community has been very much appreciated. We simply could not accomplish our mission without community support like this. It is always an honor to serve the community in more ways than one."

Another act of kindness is coming from Liberty Utilities, which has been getting the brunt end of the stick for the city's water problems, as many have faulted the company's infrastructure failure as the reason for the sometimes-dire conditions in the city.

On Thursday, the company announced that it is donating $250,000 to be used to aid residents of Pine Bluff and Jefferson County.

"As we continue to address leaks and breaks, we have found that many of them are not on our system, but they are instead on pipes in area homes and businesses," said Liberty officials in a press release. "We recognize that, for many of our neighbors, the cost of repairing or replacing these pipes is a heavy burden, and we've set aside these funds in hopes of helping lighten that burden."

The news was music to the ears of Dorothy and Larry Byrd, an elderly couple on a fixed income whose pipes burst as a result of the winter weather that saw several days of below-zero temperatures.

"We are catching hell over here," said Larry Byrd, who lives on the 1700 block of S. Cypress St. "I have to go outside every morning to cut the water on to get water and then cut it back off and it's a hassle."

Larry Byrd, who is in his mid-60s, cares for his wife who is confined to her bed. With a plumber as his next-door neighbor, Larry Byrd said he has not reached out for help because he knows he cannot afford the repairs.

"We are on a fixed income," said Larry Byrd, as he began to cry over the phone. "The last storm that came through knocked down my power lines and I had to spend over $900 out of my pocket just to get my meter hooked back on my house because I couldn't get any help from any of the agencies around here. Now I'm right back in the same boat because of the water."

Larry Byrd, after he was told about the money donated to the city, said the news gave him hope that help was on the way.

"It's hard because, besides my wife's caretaker, I have to take care of her," he said. "I had to scrape money to fix the first crisis and I don't have money to scrape for this crisis."

According to Liberty Utilities, the company will work with Mayor Shirley Washington, Judge Gerald Robinson, and White Hall Mayor Noel Foster to determine the best way to distribute those funds.