Senators lock Pine Bluff's Flowers out for a day 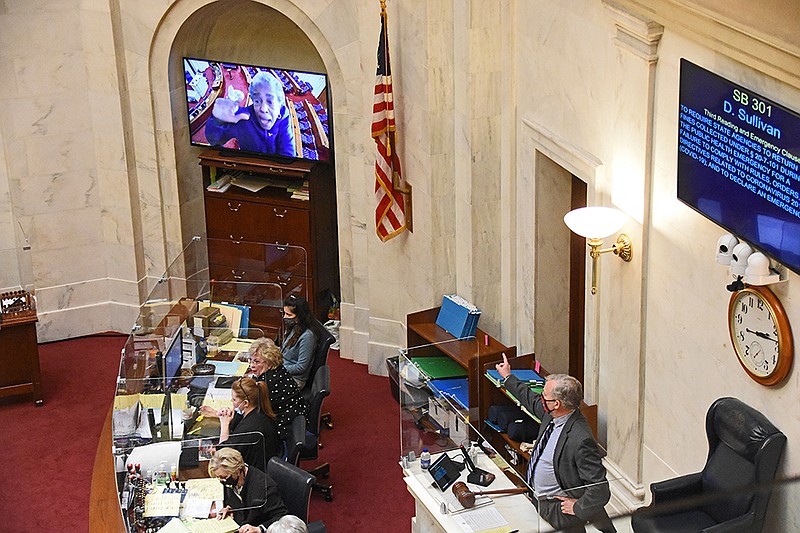 The Arkansas Senate voted Thursday afternoon to eliminate remote participation by Sen. Stephanie Flowers, D-Pine Bluff, for the rest of the Senate's proceedings that day.

In a voice vote with several senators dissenting, the 35-member Senate approved a motion by Sen. President Pro Tempore Jimmy Hickey, R-Texarkana, to terminate any senator's remote participation by Zoom for the day. Flowers was the only senator participating remotely Thursday.

The action came after Flowers clashed with Republican Lt. Gov. Tim Griffin, who presides over the Senate. Flowers is Black and Griffin is white. It was the second time this session that Flowers had been punished for comments made during proceedings.

Before the Senate acted on Hickey's motion, Flowers pressed Hickey "as to why you want to eliminate my participation.

"I have a right to participate. I am the elected senator from District 25 and I have been treated with a lot of rudeness," she said. "I have listened to the gavel being beat [by Griffin] in the middle of my questions, interruptions with my questions and I notice that it's not applied to everyone."

Flowers said Sen. Dan Sullivan, R-Jonesboro, ought be able to respond to her questions about his bill requiring the Alcoholic Beverage Control Division and state Department of Health to refund fines paid by businesses for violating state covid-19 regulations.

In response, Hickey said, "Sen. Flowers, you know you are my friend. But you put me in a spot with the way that you acted. The decorum of this body is not the way I want it."

Hickey added, "Whenever we talk about other members, I can't stand it. We have got to stop that."

After Flowers responded, Griffin rapped his gavel on his desk several more times.

"The senator has the well. Let him finish please and I will use this gavel on everybody in here once," Griffin said.

"It may be hard to tell virtually, but ... sometimes it is intended to quiet others so we can hear you," he told Flowers.

Hickey told senators he doesn't want to make any rash decisions, but he wants to explore the Senate's options, including the remote participation of any senator in future proceedings.

That led Sen. Joyce Elliott, D-Little Rock, to question, "Why don't we just shut down the whole thing rather than one person?

"If it is about all of us, then all of us need to be treated in the same manner," she said.

Earlier, during discussion of Sullivan's bill, Flowers asked Sullivan, "Where is your court case that you brought against the governor and executive branch officials" over their use of the Emergency Powers Act in response to the covid-19 pandemic. (A lower court ruling in favor of the state has been appealed to the state Supreme Court.)

Shortly thereafter, Griffin said, "We are going to move on."

After Flowers said Sullivan ought to know certain information, Griffin rapped his gavel several times on his desk.

Flowers then said she was making a statement. That led Griffin to rap his gavel on his desk a few more times.

"If you got an appropriate question, ask a question. It doesn't have to turn into a dang shouting match every time you are asking a question," Griffin told Flowers.

After Flower tried to respond, Griffin said, "I have been standing up here quiet for six years. Stop it. Just get along. ... You don't have to like him. Ask a question."

Flowers responded, "You are stopping me, interrupting me."

Ultimately, a frustrated Griffin asked, "Who is in charge of this?"

"Turn it off," he said, referring to Flowers' microphone.

Griffin then told senators, "Ask a question [and] keep your mouth shut until the answer is done, but let's act like adults."

Two weeks ago, the Senate voted to censure Flowers for a disparaging remark that she made about Sen. Trent Garner, R-El Dorado. The Senate then voted to keep her from participating in committee meetings for three days as punishment.

Flowers had called Garner, who is white, "a dumbass" before the Senate defeated a resolution that one of its sponsors said was aimed at commemorating the role Black people played in American history, though opponents said the resolution was partisan and included misinformation.

She made the remark as Garner spoke from the well of the Senate about an unrelated resolution that he had sponsored. Flowers had interrupted Garner because he was not speaking on the resolution being debated.

In March 2019, then-Senate President Pro Tempore Jim Hendren, now an independent from Sulphur Springs, quashed any thought about censuring Flowers over her angry remarks on a controversial stand-your-ground bill that failed to clear the Senate Judiciary Committee.

In that year's legislative session, Flowers' temper flared as she spoke in committee against legislation proposed by Sen. Bob Ballinger, R-Ozark, that would eliminate a "duty to retreat" from Arkansas' self-defense law.

Flowers had used several profanities and responded to an order to stop by the committee chairman, Sen. Alan Clark, R-Lonsdale, by asking, "What the hell are you going to do, shoot me?"

Flowers had directed part of her ire at Ballinger and Garner, and they subsequently used several Twitter posts to push back against Flowers' remarks.

Flowers' remarks were viewed more than 10 million times on the internet that week after the Senate Judiciary Committee meeting.