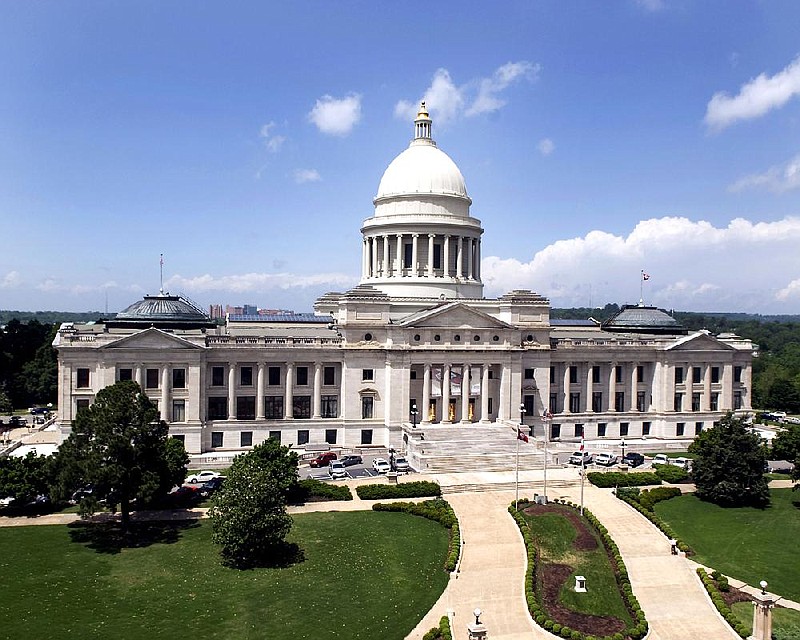 0427 Century of Service Capitol Steps-vc A Landmark Birthday: the Arkansas State Capitol at 101 Place: The Supreme Court Chamber, second floor of the Arkansas State Capitol Date: April 12, 2012 Time: 6:00 p.m., preceded by a 5:30 p.m. reception An iconic structure, the Arkansas State Capitol has no peer in the state or region. Except for those Arkansans who retain memories of a fifth grade site visit, few know how or when it came to be or why it took the form it did. The imposing home of state government, impacted through the years by the elements, a changing tenancy and the demands of new technologies, is not the same building it was when conceived more than a century ago.

The Arkansas Senate on Thursday voted to send Gov. Asa Hutchinson a bill that would exempt income that taxpayers received through certain federal covid-19 relief programs, including loan forgiveness under the Paycheck Protection Program, from state individual and corporate income taxes.

On the other side of the state Capitol, the House of Representatives voted to send the Republican governor legislation aimed at keeping employers from having to pay higher rates because of unemployment benefit claims paid in the second quarter of 2020, when businesses were shut or reduced operations because of the pandemic.

Hutchinson said he expects to sign both bills when they reach his desk.

"Both are designed to provide relief to those who are struggling as a result of business disruption and unemployment," he said in a written statement. "We will need to manage the budget impact from these tax changes but that is doable in a way that does not change my balanced budget presented to the General Assembly."

The Senate voted 33-0 to approve House Bill 1361 by Rep. Les Eaves, R-Searcy, which would change the state's Income Tax Act of 1929 to track certain provisions of federal coronavirus relief legislation.

Sen. Jonathan Dismang, R-Searcy, told senators Thursday that the bill "is going to help your taxpayers in a big way."

"Those are dollars that will stay with your employers back home to reinvest and continue on and make sure that ... they can move forward," Dismang said of what would happen if the bill passes.

The bill would exclude from the definition of income the financial aid that a taxpayer received through certain federal coronavirus relief programs, including loan forgiveness under the Paycheck Protection Program; Small Business Administration grants under the Economic Injury Disaster Loan program; and payments received under the Coronavirus Food Assistance Program, according to the finance department.

HB1361 also would permit the taxpayer to deduct otherwise allowable expenses incurred using funds from those three federal programs, according to the finance department. If enacted, HB1361 would be effective retroactively to tax years starting on or after Jan. 1, 2019.

After concurring with a Senate-approved amendment, the House on Thursday sent the governor a bill that would clear the way for the state not to charge employers for unemployment benefits paid in the second quarter of 2020.

The measure is House Bill 1212 by Rep. Jack Ladyman, R-Jonesboro.

Under the bill, the division's director "may" not charge employers for the payment of benefits that started the week ending April 4, 2020, and that resulted from the governor declaring a disaster emergency under the Arkansas Emergency Services Act of 1974 or from a disaster resulting in a state or federal disaster declaration.

In exercising discretion not to charge employer accounts, the Workforce Services director "shall act in a uniform manner with respect to all charges to employers for benefits" resulting from the aforementioned situations under the bill.

If the bill becomes law, the measure would cover claims from the second quarter of 2020 that totaled about $212.9 million because of the impact and breadth of the pandemic, Commerce Department spokeswoman Alisha Curtis said.

The unemployment insurance rates charged to employers for this year are based on claims and payroll from July 2019 through June 2020, she said.

"So, if an employer had claims from July 2019 through March 2020, they could have a rate increase," Curtis said. "They could also see an increase based on increased employees and payroll, which are normal fluctuations."

The director of the Department of Workforce Services will take action to not charge employers based on the claims for unemployment benefits in the second quarter of 2020 immediately upon the bill being signed by the governor, she said.

Employers will start receiving statements next week about their unemployment insurance rates for this year, Curtis said.

The legislation follows on an executive order that Hutchinson signed Dec. 29 aimed at preventing employers from having to pay unemployment insurance charges based on claims for unemployment benefits during the second quarter of 2020. The order says it "shall expire February 27, 2021, unless renewed in whole or in part by a subsequent executive order."

In January, Commerce Secretary Mike Preston said state officials would work with the Legislature to enact legislation to continue the noncharge to employers from the claims against them in the second quarter of last year, after the executive order expires.

The state's unemployment trust fund had a balance of $778.2 million as of Tuesday, Curtis said.